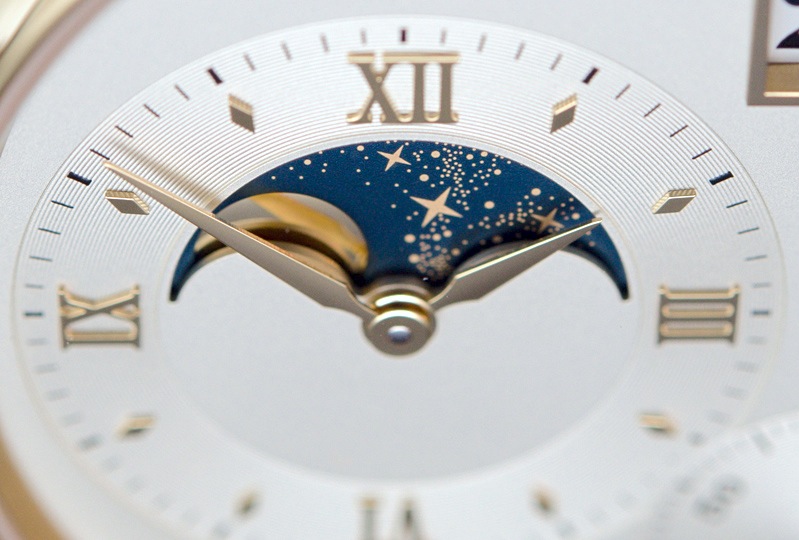 The indication of the phase of the moon is among the most aesthetic, poetic, and practically useless complications that modern horology has to offer. While its everyday necessity undoubtedly is questionable, its splash of blue, its constellation of stars and the Moon’s humble but recurrent domination collectively enable this small window to lend a unique charm to any watch dial. Since its restart during the early 1990s, A. Lange & Söhne has presented twelve models with this complication, but for the most part they did not entrust it with a more important role.

For a 2014 novelty piece however, which is to officially debut in January at the watch expo SIHH, they decided to have another take on this lovely, but ages old complication. To put it briefly, they did it in what I would call a distinctly Lange-way: they chose the long and hard way of not just slightly re-designing, but actually re-engineering it. I was invited by Lange to attend their pre-SIHH event at their headquarters in Glashütte, Germany and I went hands-on with the Grand Lange 1 Moon Phase, the piece that elevates this complication to another level for the Saxonian manufacture. Over the years, the Lange 1 has grown to be the iconic design and product family for the modern A. Lange & Söhne. No surprise then that – like any other intelligent brand out there – they try to be as careful as possible when it comes to enhancing or modifying such an important collection. The famous Lange 1 design is dominated by the off-centre dial and the “outsize” date window, and could not be what it is without its subtle, yet sublime triangular layout – to discover the shape just connect the middle of the date window and the centre of all hands. This perfectly balanced layout is very difficult to modify without upsetting its trademark simplicity. And although they sure have taken their time at Lange, they finally managed to integrate the moon phase display into this design in a new and more seamless way. The way I feel it always should have been.

As far as aesthetics are concerned, what they did for this 2014 novelty is relocate the aperture into the hours and minutes sub dial, and hence remove it from its former location, the relatively small seconds-sub dial where it was more difficult to read and to appreciate. It is not a rare thing for brands to slightly re-design a dial and immediately call it a “novelty,” but – as those who are familiar with Lange’s demanding attitude would expect – there is a lot more going on than just that. For the Grand Lange 1 Moon Phase, the brand re-engineered their L095 movement as well, and they did that not only to achieve the new dial layout, but also to enhance the performance of the moon phase mechanism. more »