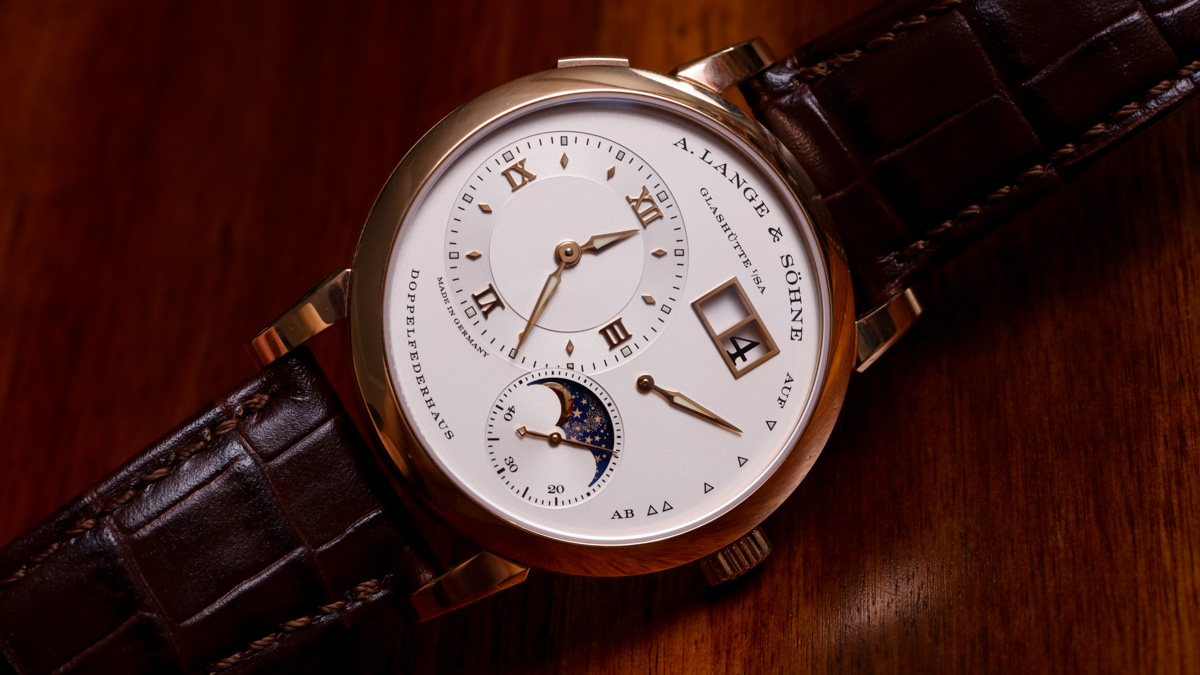 I am compelled to restrain myself each time I embark on reviewing a watch from A. Lange & Sohne. The brand is so deeply appealing almost universally to serious watch enthusiasts that it can become a daunting task to fully capture the entirety of any given model in a watch review. I will do my best to spend most of my time on the watch itself, which in this case is the A. Lange & Sohne Lange 1 Moon Phase that aBlogtoWatch debuted here in late 2016.

I encourage you to reference the article above, as our David Bredan offers a welcome history of the collection and how we got to this place. This started with the original Lange 1 from the mid 1990s. In the early 2000s A. Lange & Sohne release the first version of the Lange 1 Moon Phase, which has now been updated with a new movement and features to further entice those who missed the watch the first time around.

The guys in Glashutte must be a bit too close to the observatory because at A. Lange & Sohne there is a serious fetish for happenings in the sky (especially with the moon). If you want to go all the way to the technical top, then the Richard Lange Perpetual Calendar Terraluna (hands-on here) is going to be the way to go. For those who want to spend the time with their watch whilst it is on their actual wrist (as opposed to in your hands during a session of staring through the back until you start to inadvertently drool), something like the Lange 1 Moon Phase might be right for you.

With that said, it feels like A. Lange & Sohne has so many models with a moonphase that you might want to narrow down your search a bit prior to getting emotionally involved with this model. What first sets this moonphase watch apart is the fact that it has a day/night indicator disc cleverly placed behind the moonphase indicator discs. This adds a day/night (AM/PM) display on the dial without taking up more space. It is both elegant and attractive too. Truth be told I like the larger size of the Grand Lange 1 Moon Phase, but prefer the dial of the Lange 1 Moon Phase. The latter puts the moonphase indicator in a place where it doesn’t interfere with reading the time. You look at the time way more often than you reference the phase of the moon. Thus, leaving this dial clean of obstruction or distraction makes the Lange 1 Moon Phase a very readable watch. Wearing this watch I’ve developed a newfound respect for watches with moon phase indicators. Not because the functionality of knowing the current phase of the moon (assuming I set it properly) has any utility to us in modern times. Rather, I’ve taken the opportunity to wear such an aristocratic watch and imagine a time when having a watch with a moon phase indicator was pretty darn useful. I am guessing this was at least 150-200 years ago – with a watch of A. Lange & Sohne quality. If you were a merchant, you’d know the relative visibility on the road at night and what to predict based on the likely availability of moonlight. As a landowner you’d be able to better gauge what needed taking care of around the farm or property based on a series of lunar cycles. As a fishing boat fleet owner you’d be able to understand the tides and best times to fish. We have machines that calculate much of this for us these days, but I have a feeling that at least some of them still take into account the movement of the moon. The thing is, even though moon phase indicators don’t offer information we need, the movement of the moon still has a very real impact on our lives as human beings on this planet. Thus, the moon remains relevant even if the tool used to track what it appears like in the sky is merely emotional and fun. It also happens to be among the more aesthetically pleasing of the complications out there.

In fact, the day/night indicator behind the moon phase indicator will prove more useful to you – and is satisfying because it changes more quickly (the disc is on a 24 hour cycle, of course). If you’ve never worn a Lange 1, I do recommend it. The pioneering “anti-symmetry” design has proven to be very valuable for A. Lange & Sohne – even if it isn’t to everyone’s liking.