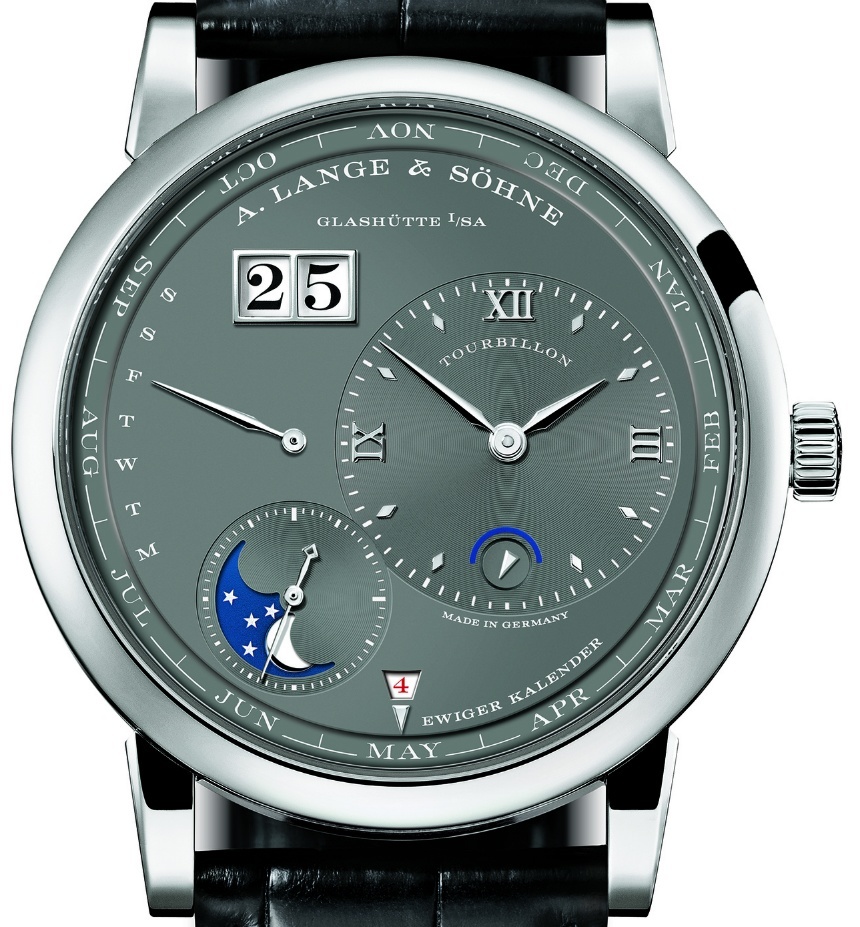 Budget considerations notwithstanding, probably my favorite new-for-SIHH-2016 watch from the talented people in Glashutte, Germany, is the A. Lange & Söhne Lange 1 Tourbillon Perpetual Calendar in 18k white gold. It follows in the footsteps of the original 18k rose gold and limited edition platinum versions of the Lange 1 Tourbillon Perpetual Calendar from 2012 (hands-on here). Another “hidden tourbillon” watch also new for 2016 is A. Lange & Söhne Datograph Perpetual Tourbillon. The concept here is about having a tourbillon-style regulation system, but not one that is exposed on the dial as is typically the case with tourbillon-containing timepieces. Rather, the tourbillon is located in the movement and only viewable through the sapphire crystal caseback on the rear of the watch. In the spirit of “stealth wealth,” A. Lange & Söhne designed this reference 720.038F with just the mere term “tourbillon” on the dial, and in German “Ewiger Kalendar” below. Otherwise, the dial is seemingly simple and straight-forward with many of its complicated aspects almost hidden in plain sight. For me, what is perhaps the most special element of the design is the placement of a “hidden” tourbillon in an automatic movement. Not only are automatic self-winding mechanical watches with tourbillon regulation systems uncommon, but I don’t think that I’ve ever before seen one with the tourbillon only visible on the movement-side of the watch. Over the last few years, many people on the aBlogtoWatch team have sort of “gotten over” the tourbillon as a reason to get excited about a watch. We’ve just seen so many of them that their importance has waned given their relative lack of utility or our observations of any real innovation. With that said, the complication is technically fascinating, and if we had to have one… well, then a tourbillon produced by A. Lange & Söhne would easily be among the few we would eagerly choose. So, in a timepiece such as this, the placement of a tourbillon in a manner that does not require you to view it all the time, but merely at your desire if you want to remove the watch from your wrist is a concept that really appeals to us. I will sum up this stream of thoughts by saying that when the brand originally released the A. Lange & Söhne Lange 1 Tourbillon Perpetual Calendar watch, I was not as excited about it as I am now. No, it isn’t the new 18k white gold case and gray dial that have changed my mind, but more likely my maturing and evolving tastes as a watch enthusiast. So let me start by discussing the movement inside of this new (and non-limited edition) version of the A. Lange & Söhne Lange 1 Tourbillon Perpetual Calendar. Inside the watch is in-house made A. Lange & Söhne calibre L.082.1 automatic produced from 624 parts operating at 3Hz (21,600 bph) with a power reserve of 50 hours. As it is a Lange tourbillon, there is also a diamond endstone on the balance wheel. The visual design of the tourbillon is further a but different than other A. Lange & Söhne tourbillons thanks to the architecture of the automatic movement. There is certainly less of a view of the tourbillon because of the automatic winding system, but for me, the added convenience makes it worth it.

If you recall, the main difference between a manually-wound versus automatic Lange 1 watch is not only the orientation of the complications (simply flipped for the automatic), but also the replacement of the power reserve indicator with a retrograde day-of-the-week indicator. This leads me to the perpetual calendar complication system which uses the big date indicator, day of the week scale, small leap year indicator, and peripheral ring for the month – which is indicated by a small arrow that sits right below the leap year indicator. There is also a moon phase indicator disc window built into the subsidiary seconds dial, and a day/night indicator relatively subtly included in the main dial for the time.

Other important features include no need to adjust the moonphase indicator for 122.6 years (if only I could live that long), as well as a patented stop-seconds mechanism for the tourbillon. I love the style of the richly-engraved 21k gold automatic rotor as well. Simple to understand and use, the information in the Lange 1 Tourbillon Perpetual Calendar watch also makes it easy to love.