Those familiar with the history of A. Lange & Söhne in Saxony in Glashutte being located near Dresden will understand that the basic inspiration behind the digital mechanical watch is a clock at the Dresden Opera house which also had a digital display for the hours and minutes. Few people know that, and for many people, the A. Lange & Söhne Zeitwerk actually represents a wonderful melding of themes. One theme being that of the world of traditional timepieces, and the other theme being that of the digital era and our increasingly “non-analog” way of reading information. Whatever your take on the A. Lange & Söhne Zeitwerk is, or what it represents to you, it is an undeniably and very much deserved success for A. Lange & Söhne. In fact, the brand itself has been changing quite a bit over the last few years. From quiet, humble, hardcore watch makers and engineers up in the mountains, A. Lange & Söhne is increasingly trying to market itself with participation in luxury events and opening brand boutiques in key cities around the world. This is often something that begins with positive intentions and a desire for growth. A. Lange & Söhne, after all, is part of the larger Richemont Group of brands. However, when a company shifts their goals to pure marketability and revenue – especially when that company is in the business of producing expensive items for enthusiasts – the results over time are often those that do not sit well with the brand’s original fans. I am not saying that A. Lange & Söhne is headed in a bad direction from an image perspective. I am, however, saying that if the brand isn’t careful, that could happen. At least for now, the same high level of care and detailing goes into the production of their timepieces that continue, in my opinion, to have some of the best looking – if not the absolute best looking – movements around. I encourage A. Lange & Söhne fans to be honest with the brand during their dealings and purchases and offer feedback on what they feel is and perhaps ins’t working. I am pretty sure that the brand will listen if offered these types of opinions from the right people. A quick interlude, though, for those who don’t understand the difference between a Striking watch and a Minute Repeater. The Zeitwerk Striking was a “quarter striker,” I believe. What that means is that when activated, the striking mechanism would use the gong and hammers to automatically sound out the time each 15 minutes. That means that the striking system was able to chime once for the hours, and then up to three more times for the quarter hour. In contrast to this traditional system, decimal minute repeaters altogether bypass the quarter hours and go from hours to 10-minute segments. This means the minute repeater chimes can take longer, but the result is something that most people consider being easier to read… I mean, listen to. Decimal minute repeaters are rather rare, and the only other one that I can think of is the Seiko Credor Minute Repeater watch from Japan (which is amazing). A. Lange & Söhne claims that the Zeitwerk Minute Repeater is the world’s first watch with a mechanical jumping numerals display and a decimal minute repeater. Who would argue with that? This is very cool, and at least good news for people who simply adore minute repeaters. I love the A. Lange & Söhne Zeitwerk so much for how it blends what is so right with A. Lange & Sohne and pure, unadulterated legibility. The A. Lange & Söhne Zeitwerk Minute Repeater takes the concept into a more “collector” direction with its increased complexity and functionality, but it isn’t something which is at all more useful on a daily basis. With that said, there are some other special features in the minute repeater complication that are worth noting. One of them is a pusher to activate the minute repeater versus a slider. The Seiko Credor Minute Repeater also did this, and it is becoming slightly more popular on other luxury European watches with minute repeaters. The benefit of a pusher versus a slider is that it reduces the potential to damage the movement which can exist if you don’t fully engage the slider. A. Lange & Söhne developed a few other security systems for the A. Lange & Söhne Zeitwerk Minute Repeater such a system that prevents the minute repeater from being activated if there is less than 12 hours of power remaining in the mainspring barrel. A small red dot is placed on the dial-mounted power reserve indicator to mark this “crucial” point. A. Lange & Söhne further claims that the Zeitwerk case has been thoroughly “tuned” in order to maximize the harmonics and reverberations of the chiming mechanism. That should mean louder and clearer sounds from the minute repeater when it is activated. With that said, what is odd is that A. Lange & Söhne decided to put the Zeitwerk Minute Repeater in a platinum case (which is 44.2mm wide). Dense and very heavy, platinum (while very precious) acts to absorb sounds. Unless I am mistaken, my presumption is that platinum might be one of the worst materials to use for a minute repeater – even though it isn’t that uncommon. Inside the A. Lange & Söhne Zeitwerk Minute Repeater watch is the amazingly beautiful in-house made caliber L043.5 manually wound movement. The Zeitwerk’s double jumping digital displays as the constant force mechanism to ensure that the accuracy is relatively consistent draw a lot of power as it is. With the addition of the minute repeater complication, the movement does what it can to keep up. A. Lange & Söhne uses a rather steady frequency of 18,000 bph (2.5Hz) which uses less power than a 3 or 4Hz movement, but given all the power draw, the power reserve maximum is only 36 hours (even less than Zeitwerk Striking). Power has always been the weakness of the Zeitwerk, which must really be wound each day. Good thing it has a handy power reserve indicator on the dial. You can view the L043.5 movement through the rear of the watch, and it is amazing. You can’t help but love all that hand polishing as well as the decorative engravings. This is really one of A. Lange & Söhne’s more innovatively complicated movements and it is a testament to their dedication that the A. Lange & Söhne Zeitwerk Minute Repeater even works. 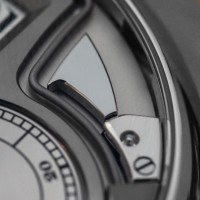 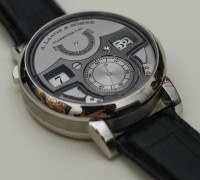 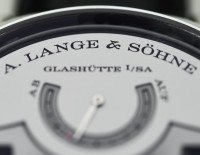 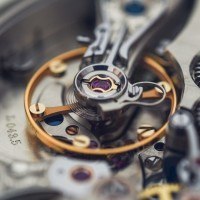