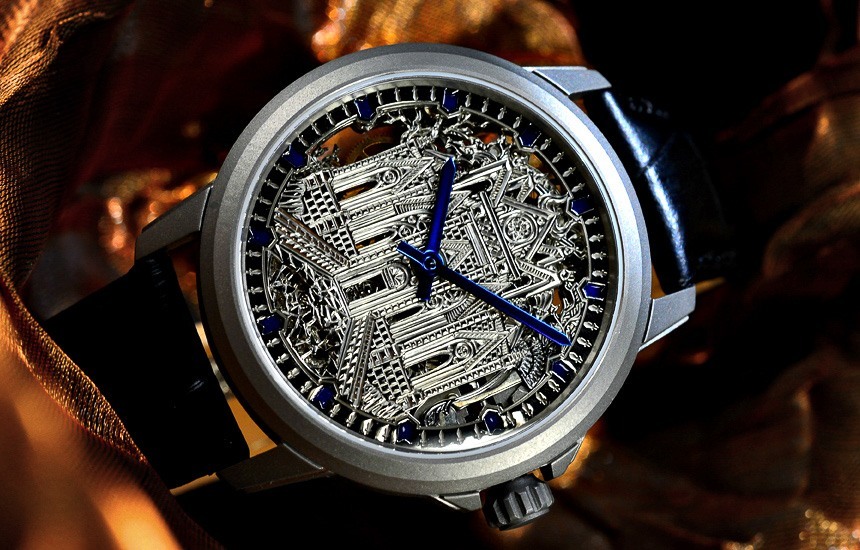 Although smartwatches will inevitably continue to make advances in both technology and functionality, there are some aspects to them which will never be attained through circuit boards and touch screens. Chances are that you will know this already, but allow me to emphasize it nonetheless: the world of watchmaking is much more than simply telling the time; what makes a watch so special to many enthusiasts is the character enveloped behind each timepiece. The art of watchmaking is one of the few crafts still around today which thrives off the fine art of handcrafted goods; and no matter how beautiful and functionally advanced a smartwatch might be, there is something truly exceptional to be said about a piece which has been carefully crafted by a true artisan. Today, we are looking at something that is most fitting of that description, with the affordable hand-engraved watch movements by Artur Akmaev.

Although the supply of master engravers and enamel painters is not as substantial as it once was, there are still young enthusiasts in the field of watchmaking that understand the value and emotions evoked by a well decorated dial and movement. Artur Akmaev, a talented young artist from Russia has taken this passion for art and design and turned it into some beautifully handcrafted time pieces. The art of engraving and enamel work has a rich heritage in the craft of watchmaking. The amalgamation of art and engineering has allowed mechanical watches to withstand the accusations of being obsolete by proving to the world that there is much more to watchmaking than keeping the time. The Quartz Crisis of the ’70s and ’80s led to a lack of demand for refined mechanical timepieces, a direct consequence of which was the forced closure of many of the Swiss watch industry’s engraving and enamel art schools in Geneva. With very few options left, the skill of a master engraver and enamel painter became highly prized amongst many companies. Artur Akmaev began his journey studying the art of jewelry design, taking classes on hand engraving and attaining a degree as a Jeweler. It wasn’t until his continued education at the University of Applied Arts in Moscow that his passion for watches and watchmaking quickly grew. His early work began on a robust Russian movement known as the Poljot 3105, as part of a project that was created for his personal enjoyment – and that fueled what would soon become a long line of beautifully crafted pieces. A typical project of his begins its life as a base ETA 6497 or 6498 movement as they are most comfortable for his type of work. These movements also allow him to create much more complex work with layered images resulting in a beautiful and three-dimensional piece of art. He begins by planning out and sketching everything from the dial and main plate to the crown wheel and drum barrel. The movement is then stripped down to its bare bones where each component is then engraved and skeletonized individually. The components are then hand polished one by one, and plated in either rhodium, nickel, or occasionally, gold. The movement is then meticulously reassembled and tested to ensure everything runs smoothly. A single piece will usually take 2-3 weeks to produce depending on complexity and inspiration for the theme. New techniques are incorporated into every piece to continue improving his craft and learn from master engravers of the past. The main focus of Artur Akmaev’s timepieces are to create art pieces of great detail while uncovering the engineering behind a movement through skeletonization. Thus the cases selected are very simple in design as to not distract the viewer, much like the framing to a painting. Before Artur Akmaev could graduate from the University of Applied Arts he had to create a senior project, and what better way than to create a series of timepieces implementing both enamel work and hand engraving. The theme for these pieces draws its inspiration from the mars rovers Opportunity and Curiosity. The first piece shown below represents the internal workings of these complex machines along with a tire tread strap to match; the second piece is a representation of the view through the eyes of these rovers. A beautiful blend of enamel colors creates an artistic portrayal of the mars surface with a mountain range in the distance. One of his more recent personal projects pays tribute to his childhood hero, Batman. The front the watch implements styling cues from the Dark Knight trilogy. Batman is posed as a watchful protector overlooking the gothic styling of Gotham city with a batarang in hand and the Bat-signal out in the distance. Even components such as the drum were meticulously engraved to display the Wayne Enterprises logo which slowly rotates as the mainspring unwinds. These small details may often go unnoticed, but it is what makes these kinds of pieces so special; the more you look at the watch, the more hidden features you can uncover. On the back of the piece we have a beautiful artistic representation of the Batman cartoon series from the early 90’s. Even the enamel colors used were carefully blended to mimic the color pallet from the cartoon. At first glance, one will notice the Joker, Scarecrow, Bane, and a question mark for the Riddler; however upon further inspection, there are also symbols scattered across the movement to represent other characters of the series. There is the Arkham Asylum, poison ivy, Penguins umbrella, as well as the phrase “liberty 1922,” paying tribute to the coin used by Two-Face. The amount of time and effort spent hand engraving and enameling each of these small little details truly makes it a labor of love. We have reached a point in time where CNC machines and even some 3D printers can surpass the precision of a human hand, and yet, when faced with the choice of a perfectly machined dial and one that is engraved by hand, many enthusiasts will often choose the latter. The CNC machined piece may be engraved to perfection in every single way, but that perfection gives a lack of character in the piece. The imperfections of a hand engraved dial are what give it life, and a connection between the wearer and the engraver. Each imperfection tells a story, and it is up to the engraver to challenge his creativity and make what was once a mistake into a beautiful flow of art. Artur Akmaev’s timepieces will run you around $2500, however, since these are custom, one-of-a-kind pieces, prices will vary depending on complexity and desired amount of detail. This includes a Swiss ETA movement with plating, steel case, sapphire crystal, leather strap, and of course hand engraving work by Artur Akmaev. For those with inquiries or interest in a custom piece of their own, feel free to contact him directly via his email.