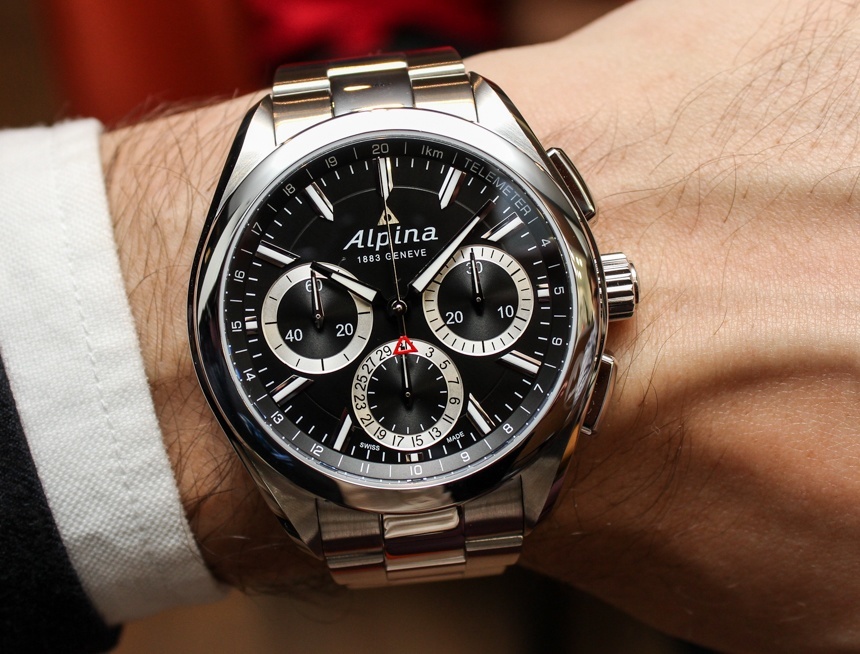 For many brands, establishing an in-house manufacture automatic chronograph calibre is something of a grail, a sign that they’ve arrived. In a world of 7750s, the automatic chronograph is more common than it once was, but in-house development takes years, a considerable investment, and should really only be attempted by a brand that has the market to exploit their in-house prowess against their competition. For Baselworld 2015, Alpina brought a gun to a knife fight with the announcement of an in-house automatic flyback chronograph movement, ready for your wrist in the new Alpina Alpiner 4 Flyback Chronograph. Alpina has had chronographs in their past, but they relied upon 3rd parties to supply the movements. This strategy is quite common and, while more expensive in the long run, doesn’t require the upfront cost of developing a complicated in-house movement. For many small brands, off-the-shelf parts are a no-brainer, but Alpina has seen fit to spend over three years developing an in-house calibre, which debuts in the new flagship model for their mountain-loving Alpiner 4 collection. The movement is called the calibre AL-760 and it is comprised of some 233 components and offers bi-directional winding, a 38-hour power reserve, and a specialized star-shaped column wheel that provides a very smooth experience in starting, stopping, and resetting the chronograph. The AL-760 is a modular chronograph, wherein Alpina has designed a module that is added to one of their existing in-house movements (an AL-710) to form the final calibre. With a maximum measure of 30 minutes and a pointer-date sub dial at six, the AL-760 is an impressive feat of design and manufacturing for a small but fiercely competitive brand like Alpina. You can even notice that the crown and pushers form a vertical line on the case side, a rare feat for a modular chronograph (as the two elements of the movement are stacked, in this case with the chronograph module beneath the dial). On to the watch – last year, Alpina launched the Alpiner 4 GMT, which uses a Sellita SW200 movement with a custom Alpina module to offer proper jumping local hour hand GMT functionality. This year, they’ve continued their growth of the Alpiner 4 line with the Alpina Alpiner 4 Flyback Chronograph. For those of you new to the Alpiner 4 concept, it is a sort of relaunch of a series of priorities first exemplified by Alpina in the late 30’s. The four pillars of the Alpiner 4 models are 1) anti-magnetism, 2) water resistance, 3) shock resistance, and 4) the use of non-rusting steel for the case – all great areas on which to focus when designing a sport watch.

The new Alpina Alpiner 4 Flyback Chronograph is 44mm wide in stainless steel with with a sapphire crystal and a screw down crown. While not a dive watch, water resistance is 100m (330ft) and the case back is solid (presumably to ensure anti-magnetism). Lume is provided by SuperLuminova and legibility is very good. On wrist, especially on the available steel bracelet, the Alpina Alpiner 4 Flyback Chronograph feels big and rather tough, just as you’d expect from a 44mm sports chronograph. The case is quite thick, which is common for modular chronographs (similar to the Tudor Heritage Chronograph). While on the thicker side, the case is very nicely finished with brushed elements along the front face and a polished bezel and edges that reach to the lug ends. Available in a black or a silver dial, the black feels sportier while the silver feels somewhat more classic. If you don’t want the added weight of a steel bracelet, or simply prefer a strap, Alpina is also offering the Alpina Alpiner 4 Flyback Chronograph with a black alligator strap. With pricing starting at $4,895 USD, the Alpina Alpiner 4 Flyback chronograph is priced aggressively and is only a bit more expensive than a base Omega Speedmaster, which is 42mm wide, uses a manually wound (non-flyback) chronograph movement and retails for around $4500. For something closer in size to the Alpina, consider the Speedmaster Co-Axial chronograph at 44.25mm, which has a list price of $8200.

The end result is that if you’re interested in sports chronographs, the Alpina Alpiner 4 Flyback Chronograph is an impressive step for Alpina, both in terms of their capabilities as a manufacture and their place in the market (and maybe on your wrist). alpina-watches.com