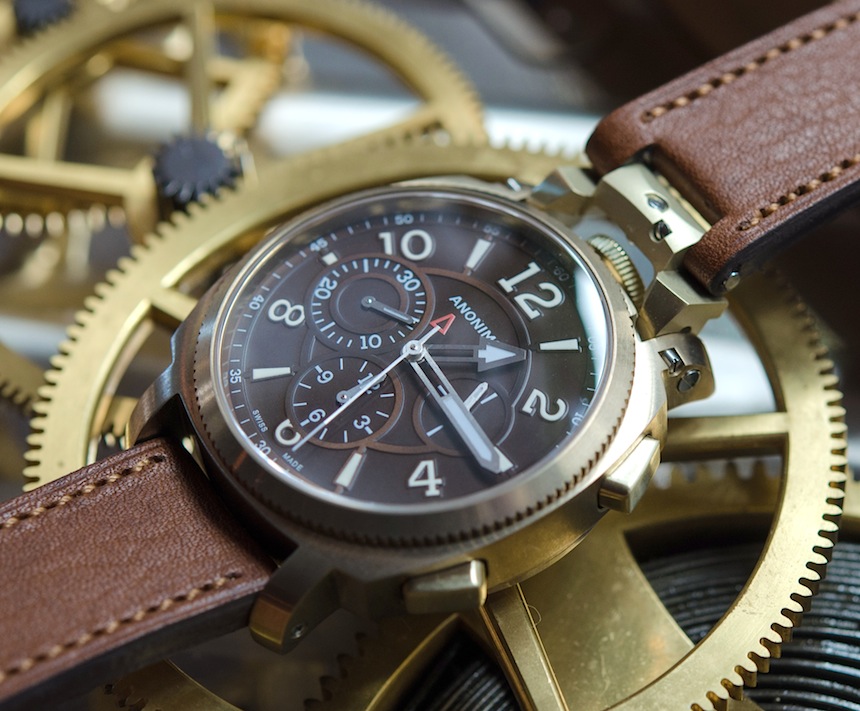 The birth – or occasional rebirth – of a company is always a noteworthy phenomenon in the galaxy of watch making. It is so because it either grants us the chance to follow the formation of a new star that will shine on for decades or even centuries to come or the sight of a falling star, something that only temporarily existed and barely left anything significant behind. What we have now is the rare opportunity to take a closer look at the earliest stages of a watch brand’s revival as I was among those invited by Anonimo to visit them in the beautiful Italian town of Florence. We gathered to discover and to discuss their plans for the future and also to see where and how they will have their trademark brass cases manufactured.

Those familiar with the brand will know that the creation of Anonimo in 1997 already meant a second chance, a new beginning in itself. It happened that year that Officine Panerai (which was also based in Florence at the time) was purchased by the Vendome Group of Richemont SA. It was one important acquisition for this giant luxury group that currently owns A. Lange & Söhne, Jaeger-LeCoultre, IWC, Vacheron Constantin, Cartier, Piaget and several others. The new owners of Panerai relocated its manufacturing and design facilities to Switzerland, leaving several of its engineers, craftsmen and much of its Florentine manufacturing heritage behind. Consequently, Anonimo’s birth meant a new beginning partly because some of those craftsmen who used to work for Panerai (but could not or did not want to follow it to Switzerland) started working there, and partly because with Anonimo there remained a luxury watch brand in Florence. Basically, the goal of Anonimo was to create a brand that would help keep the Florentine watch making traditions alive by pairing Italian designs and cases with Swiss-made mechanical movements. Since Anonimo in one way or another substituted Panerai in Florence, it primarily concentrated on designing divers’ watches. All in all, it was a successful concept as (despite its brief history) the brand quickly gained a cult following; something that still exists, especially when it comes to appreciating some of the earlier models. In September 2011, the founder Federico Massacesi left the company to a new ownership and – truth be told – we have not heard much from Anonimo ever since. Late last year however, I was one of the handful of people who were invited by the brand’s new owners to Florence to visit the workshop where their famous bronze cases will be made, and also to look at some early prototypes.

Anonimo had, without the shadow of a doubt, been a brand that was rather difficult to make sense of. With some iconic patents and designs (and some not so good ones,) the brand turned into one of those small companies with a unique personality, something people could more closely relate to. At the same time, possibly in an effort to try to make everyone happy and also to find its true identity, Anonimo also became infamous for creating countless different collections and model versions. That not only made it difficult to determine actual second-hand values for their watches, but ultimately it also made it more difficult for followers to establish a thorough understanding of the brand’s position. With that said, there is a base of followers who appreciate and collect the brand’s previous watches.

For them, the recent quiet years of Anonimo meant a lack of information regarding the brand’s present or future. That is something I will get out of the way right now, so before looking at the brand’s future offerings, we will discuss its present. Anonimo (actually Anonimo Switzerland SA) is not linked in any way to Anonimo Firenze’s management, meaning that it is a completely new company. While the brand’s bronze cases (as we will see further on in this article) are manufactured in Florence, Italy, the watches are assembled in Switzerland. In short, Anonimo changed owners and it is a new company that carries on some of the key elements of the “old Anonimo”, while totally restructuring its collections, and its networks of suppliers and distributors. Consequently, given that they are starting from scratch, they will not be able to create parts for warranty repairs of discontinued models by Anonimo Firenze, and have an extremely limited stock of only some select parts for the older models. Hopefully that gives the fans of the brand some insight into what is happening now behind the scenes. Anonimo itself is set to debut at this year’s Baselworld. With all that said, let’s begin with discussing the secrets of the “Bronzo” case – something that will likely serve as one of the key elements for the new Anonimo’s collections. The idea of bronze watch cases may be unfamiliar to many, and there’s good reason for that. During the past couple of years cases done in carbon fiber, titanium and other space-age materials have become not only increasingly popular, but more ubiquitous too, as several high-end brands have began to incorporate such advanced materials into their collections. Bronze appears to be a deliberately ignored material that is only available from a very limited number of brands and for an even more limited number of their models, all for reasons we will shortly discuss.

Anonimo has a history with bronze cased watches (just look at the Polluce and the Dino Zei for two famous Anonimo designs also executed in this material). To put it in context, Panerai introduced their first commercially available bronze watch in 2011 (the PAM382) and the PAM507 two years later – both limited to only 1,000 pieces. Beyond them the Ennebi Fondale, the Gérald Genta Safari and only a few indie-brands spring to mind when it comes to bronze cased watches… and that’s about it. So far neither Panerai, nor any other brand has established an easily accessible, non-limited collection that allowed enthusiasts to acquire a new watch cased in this apparently mystical material. So why is that exactly? Interestingly enough, the reason for brands to not want bronze in their permanent collections is the exact same reason why people do want bronze cased watches. Let me explain by giving you the primary reasons why collectors might be so tempted to fit this several millenia old, non-precious material into their collections. For one, bronze looks very cool in person and complements military and-or diving watches perfectly with its uneven finish and rugged, nautical aesthetics. Two, bronze, thanks to its special characteristics, develops a completely unique patina over the years. This aged look is unique to each case as its color and the extent to which it affects different parts of the case will depend on where, under what circumstances and for how long the watch has been worn.

Primarily it is the case’s exposure to humidity, water (or sea water) and different temperatures that will define its patina. It works in a way that once the surface of the bronze parts have developed this layer the process will end and the metal underneath will not suffer from further oxidization. So you don’t have to be afraid of the watch slowly but surely rotting away as time passes. This attribute of bronze offers an awesome, truly unique look to the watch and, truth be told, many collectors love the idea of having a piece in their collection that is able to transform into a one-of-kind piece that absolutely no one else has.