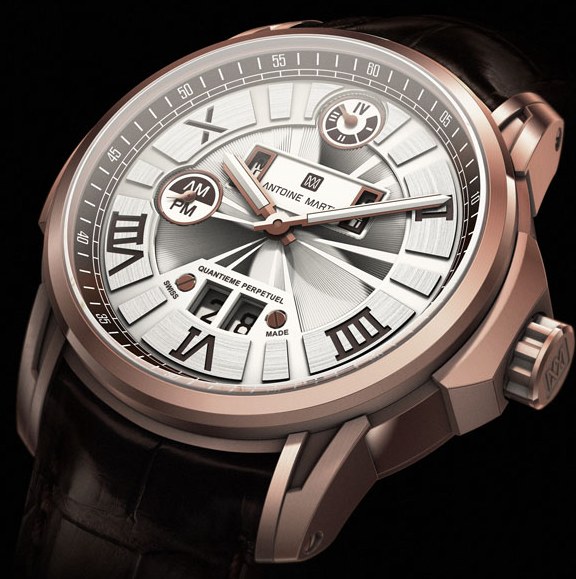 Martin Braun has had a tough last couple of years. The brand with his name “Martin Braun” was owned by the Franck Muller Group before financial hardship forced them to shut it down, and they didn’t have any desire to give the name back to Martin. So he took some time off, probably played some video games, and is now back with a new brand called Antoine Martin. Their first watch called the Perpetual Calendar (really guys, that is the best you could come up with after developing this cool design?) contains a brand new movement that Braun created called the Calibre AM 39.001, and has hands that look like big swords. Hands like swords so big that they remind me of typical blades seen in the modern Final Fantasy games. Even the design of the watch and case fits that art style. So I’d like to dedicate this article to my boyhood love of Final Fantasy and truly gargantuan swords. That isn’t to say the hands look weird. There is a sort of space-age neo-Roman architecture going on in the case and dial design that is cool. It isn’t utterly original, but feels well composed none-the-less.

Antoine Martin isn’t just about Martin Braun, there is Antoine! No, actually I don’t know who Antoine is. The brand’s CEO is Bruno Jufer who is a industry veteran who should be able to sell the brand. Martin is a swell guy, but not the salesy type. I think he is most happy when making nice watches. The Perpetual Calendar case will likely undergo some refinement before being finally released. The case is to be 46mm wide, and offered in 18k rose gold, white gold, or DLC black coated steel (that will look killer). The movement is a work of art in both design and function. This is where Braun really excels. The Calibre AM 39.001 is all in-house made and designed. It has 324 parts and a silicium pallet lever, escapement wheel, and impulse pin. This is for friction reduction and increased movement accuracy – and according to Antoine Martin, the watch is supposed to be very well performing. I love the super large balance wheel that you can see in the back of the watch. It runs at 2.5 Hertz, so it won’t revolve super fast, and it is a massive 17.5mm wide (being mostly titanium). The movement has a long power reserve of 144 hours (six days), and a power reserve indicator that uses a new type of system that the brand calls their Aerodynamic Amplitude Stabilization (ADAS) system. That sounds like a really fancy name that is trying to overcompensate for something, but I like all the effort Martin put into the movement. Functionally the movement has the time (no seconds) and a perpetual calendar with the day, date, month, leap year, and day/night indicator. I love the red discs on the white gold model and the layout over all. However, I feel that the dial would have benefited from being totally symmetrical – with the leap year indicator next to 3 o’clock versus 12 o’clock. I bet you could have put a small subsidiary seconds dial at 12 o’clock – I’ve never seen that done before. This is a pretty good start to Antoine Martin. The design of the Perpetual Calendar watch is cool, and the movement is really impressive – not that Martin Braun is new to this, but it is interesting to see how the look of this watch is so different than the looks of the watches under the Martin Braun brand. Look for Antoine Martin watches to be unveiled soon, at prices that will make your party in Final Fantasy hunting for gold for long, long hours.