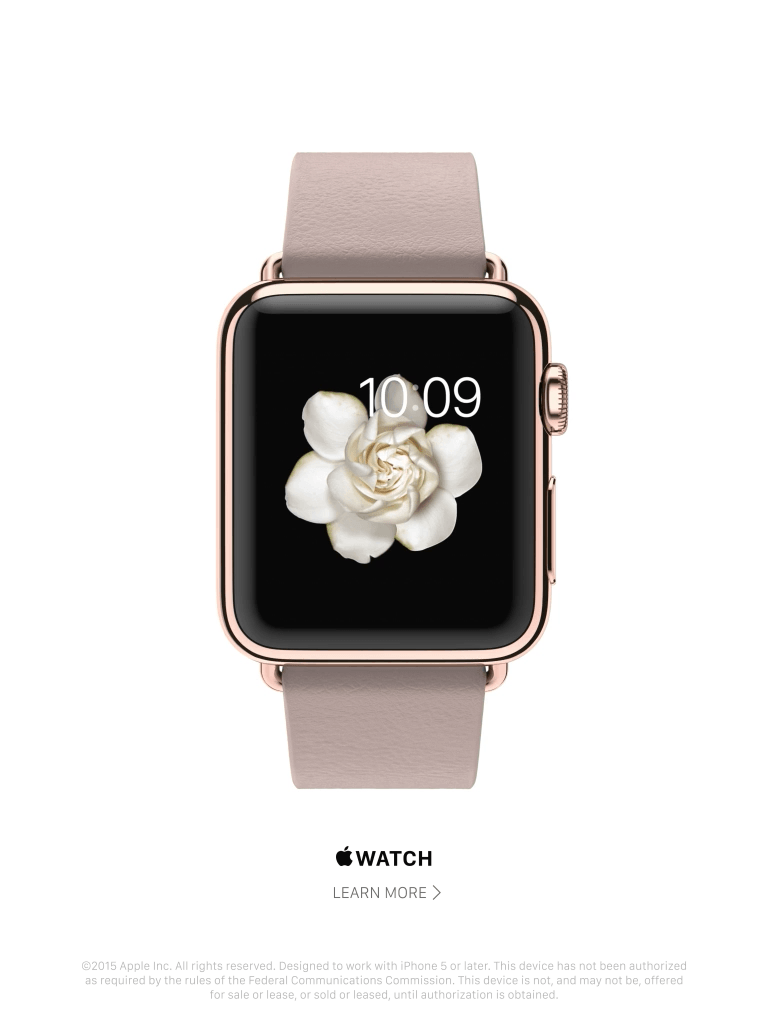 Why The Apple Watch Is Heavily Marketed To Women Smartwatch makers may have a lot more to thank Apple for than they realize. It will be Apple alone whose efforts will make smartwatches a successful consumer product. While the smartwatch market apparently sold 6.8 million units in 2014 (an apparent 82% increase over 2013 according to smartwatchgroup.com), the industry is still just learning to walk and has an extremely limited adoption rate among mainstream consumers. Thanks to a lot of good advice and some great hires, Apple understands that the Apple Watch (hands-on here) is a tech device which mainstream consumers primarily conceive as a fashion item because it is something they wear. Apple also knows that women are going to be an extremely important consumer of the Apple Watch and marketing to them will be a key part of the Apple Watch’s first-year success. Even though the Apple Watch has been covered by mainstream media, its nuts-and-bolts (especially pre-launch) have been mostly covered by the tech industry, who are keenly interested in what it will do and how much it will cost. One area of discussion that they usually miss is how important mainstream consumers will be for the success of the Apple Watch.

A simple analysis of Apple’s marketing efforts shows a clever and very wise multi-front approach to spreading news and desire for the Apple Watch. While the Apple Watch debut in September 2014 (and subsequent announcements) have been designed to get the gadget and tech community speculating about the mid-2015 Apple Watch release, Apple has, at the same time, been focusing considerable elements on the fashion industry. It is also important to note that the luxury watch industry has been focusing on marketing toward the fashion industry for almost a decade now, and for the last two years, that focus has been heavily on women. The luxury watch industry hopes that for 2015 and beyond, women, as well as men, will be major growth areas of luxury watch consumption. It is interesting that both Apple (the luxury smartwatch maker) and the traditional high-end watch industry are focusing on women almost at the same time. The Apple Watch Edition in 18k gold on the wrist of Liu Wen, on the November 2014 issue of Vogue China With the iPhone, Apple learned that mainstream consumers are extremely interested in the design of their tech products, as well as a reliable user experience. The sheer volume of functionality as well as the competitive advantage of one product over another is slightly less important. Apple has already done an excellent job of creating desire for the brand overall, so its goal with the Apple Watch is to gently instill the notion that wearing an Apple Watch is fashionably sound.

To do this, Apple has been engaging with what it feels are the world’s top fashion resources. Last November (2014), the Apple Watch Edition in 18k gold appeared on the wrist of Liu Wen on the Chinese version of Vogue Magazine. The Apple Watch Sport is seen on the wrist of Candice Swanepoel on the March cover of Self magazine. The latest news in this regard, as macrumors.com has reported it here, is that the Apple Watch is also appearing in the March 2015 issue of Vogue magazine as a more traditional advertisement. Now, Apple is taking the expected move of engaging in a more traditional marketing campaign to push the idea of the Apple Watch to the mainstream female consumer – a demographic who is known to seek “social and fashion acceptance” from fashion authorities such as Vogue. The placement of the advertisement in the March 2015 US version of Vogue should also be a clear sign that the Apple Watch will be available for sale soon. Several sources believe that the Apple Watch will begin to ship and be available for purchase in April 2015.

Female consumer acceptance of the Apple Watch is extremely important for the smartwatch industry who, until now, has mostly male buyers. Smartwatch companies have, for the most part, failed to convince women that smartwatches are useful, sexy, trendy, and aspirational. If anyone can remove the “geek element” from a connected wearable communications device, it is Apple, and they know it needs to be done right off-the-bat if the Apple Watch is going to be perceived as an object of desire for women. The March 2015 Vogue advertisement for the Apple Watch covers 12 pages in the print version as well as an Apple Watch animation in the digital version. Apple includes images of each version of the Apple Watch (aluminum, steel, and gold) in the Vogue ad, showing that they feel each model is a suitable match for today’s fashionable woman. Images of the Apple Watch are smaller on the page, which helps consumers looking at the ads visually understand what the watch will look like on their wrists. The ad also makes it clear that the Apple Watch will have different types of straps and styles. This is because it is safe to assume a large percentage of the demographic seeing the ads in Vogue may be familiar with the Apple Watch but not aware of all the different Apple Watch versions.

Apple is wasting no time before the launch of the Apple Watch ensuring that mainstream consumers are fully prepared and excited for the Apple Watch. What is amazing is that Apple doesn’t even need to tell everyone what the Apple Watch does. In many ways, the Apple Watch launch is similar to that of the iPad; Apple released a product without an established market yet. Apple never told people what they needed an iPad for, but merely demonstrated what it looked like and what using it might be like (and look like). People had complained at the time that the world didn’t need a “really big iPhone.” The Apple Watch made its U.S. magazine cover debut earlier this month in the March issue of Self

Likewise, today, many tech pundits are complaining that smartwatches are an answer to a question no one was asking. I disagree. I feel that consumers have been wanting to wear technology and make technology a more personal part of their daily routines. Mobile phones have become indispensable for most people, but they still act like extra appendages that people don’t know what to do with. Simply observe a crowd of people, and notice how many are awkwardly walking around with their phones in their hands versus in a pocket or bag. Communication technology is meant to be accessible all the time and reserved for occasional use. As we use connected devices for more and more purposes, the notion that they are supposed to sit waiting hidden away from view will becoming increasingly archaic. It’s only logical that devices become something you wear – even if we need to take baby steps to get there.

Apple isn’t going to win the smartwatch fight because the Apple Watch is capable of doing things its competitors can’t do – even when it is clear that the Apple Watch does something unique or better than the rest. Apple is going to win the smartwatch fight by producing a product that busy, image-conscious, and of-average-technical-education consumers are going to want and feel is approachable. A close look at Apple’s larger marketing efforts surrounding the Apple Watch reveals a rather brilliant plan when the various arms of its approach are put together. Apple has connected the Apple Watch with the traditional world of horology to garner acceptance among watch lovers. Apple has obviously secured favor with the tech and electronics industry by mere virtue of being a new Apple product, and Apple has focused directly on the world of fashion to help people realize it is a product that does not clash with (but rather is meant to enhance) a modern lifestyle.

It doesn’t matter whether you are totally stoked about the Apple Watch or don’t want one at all, you have to admit Apple has done a clever job with a product segment (smartwatches) which has a lot of potential, but not a lot of current pizzazz. Apple knows that male consumers are waiting for answers to the question “Will the Apple Watch work well, and what does it do for me?” With the impending Apple Watch launch, that will all be answered in due course, but the more interesting questions they are attempting to answer are for female consumers, who should ideally represent 50% of Apple Watch buyers. The luxury and fashion watch industry has for a long time known that the majority of female consumers are primarily interested in what something looks like on them, what wearing a brand says about them, and how a brand or product fits into their current or idealized lifestyle. Apple is the only smartwatch maker that I am aware of who is seriously approaching the needs of female consumers. This represents a unique cultural shift in-house at Apple, who is still at its core a technology company – and best at producing functional products. The effort required to create fashion advertising for a technology company should not be downplayed. We will see how well Apple Watch competitors also approach this market.

What we will determine next is how Apple optimizes its Apple Watch retail experience both at Apple Stores and at third-party retailers so that both male and female consumers of various types find the Apple Watch purchasing experience both simple and enjoyable. The next few months will very important to Apple, who is fighting battles to make the smartwatch something everybody wants. Their victories will no doubt have a serious impact for the smartwatch industry as a whole.