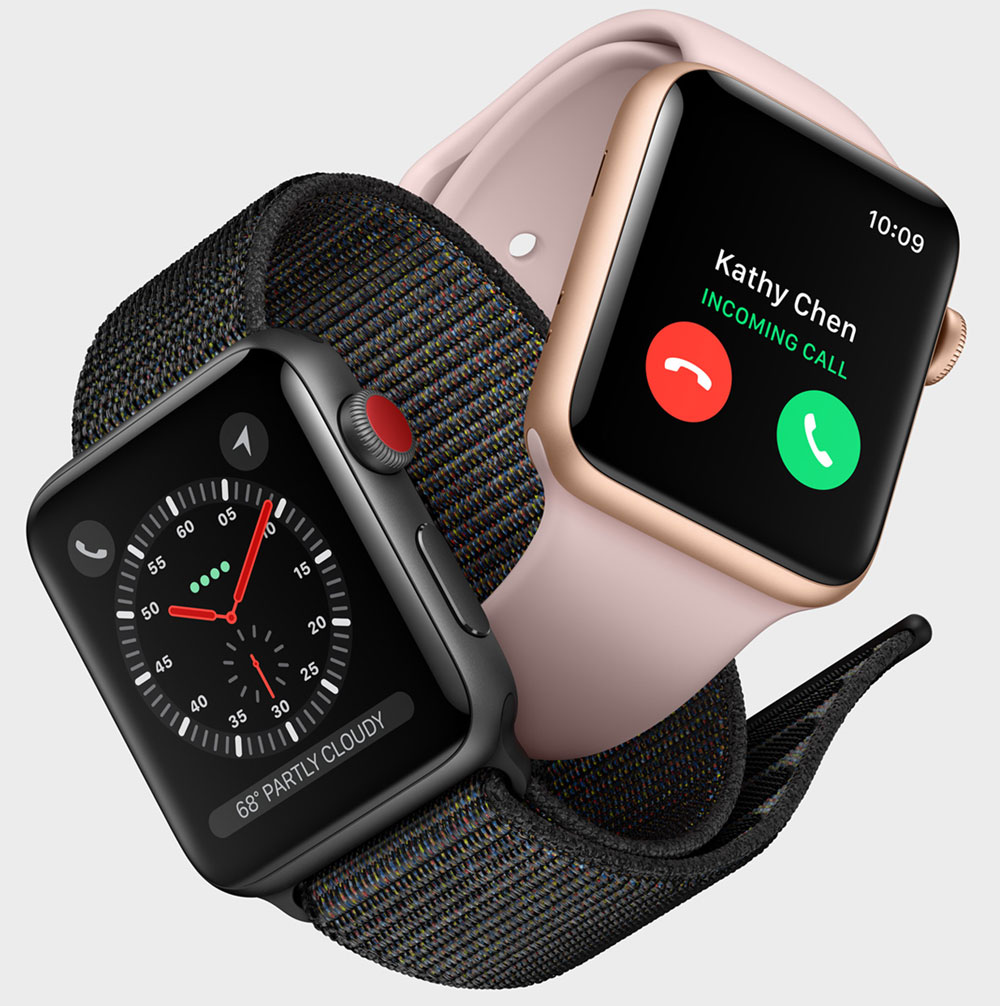 It is that time of the year again, the time to gather around and learn what technological nirvana Apple will bestow upon us. The annual Apple keynote event is where the major new Apple products and updates of the year are unveiled, and this year’s big announcement related to the Apple Watch is that it will feature cellular data connectivity. The 2017 keynote event marks the 10th anniversary of the iPhone’s launch, and the new iPhones have much of the general tech consumers’ attention. We are here as watch enthusiasts, however, to talk about the new Apple Watch Series 3 with cellular and what it means for Apple, smartwatches, and you. As noted, cellular connectivity is the major news for the Apple Watch. It is a big deal because it means one can use cellular data including internet and phone calls on the watch without it being paired to a phone. People can no longer call it just an accessory for the iPhone, as it is now capable of acting as a standalone device. The look of the Apple Watch is largely unchanged, but a red dot on the “Digital Crown” will be polarizing – though the Apple Watch was arguably in need of a little edginess. Last year, Apple CEO Tim Cook told us that Apple was the number-two watch brand in the world, and it has apparently overtaken Rolex to become the number-one selling watch in the world – we would like to see the exact figures they are referring to for ourselves. The ostensible convenience of merely not having to reach for the smartphone in one’s pocket or purse that smartwatches have been said to offer has understandably not convinced everyone. With cellular data available directly on the Apple Watch itself, one could theoretically not carry a phone at all and yet remain as connected as ever. While not the first smartwatch to offer mobile connectivity, it represents a big step forward for the Apple Watch in terms of how it will be used and viewed. Ever since the launch of the first Apple Watch in 2014, we have noted that it has been held back by its reliance on a phone and that being freed from this restriction was the only way toward realizing its full potential. The Apple Watch previously relied on a connection to an iPhone for a number of applications. Apple has added features such as WiFi, Bluetooth, and GPS to allow some iPhone-free activities using the Apple Watch – and the new Series 3 will, of course, also have those and other tech previously available – but there was never a point at which it seemed capable of true independence. There have been talk and rumors for some time (as well as a leak ahead of Apple’s announcement) about the Apple Watch’s eventual cellular connectivity, but Apple has moved pretty quickly in bringing the Apple Watch to this level. That said, even with mobile connectivity the Apple Watch will, of course, not be able to replicate every feature of an iPhone – yet. You’ll still need a phone for a range of things we are accustomed to having at our fingertips, such as the ability to take video and photographs on the fly. Apple promises 40 million songs on your wrist with Apple Music and AirPods. It’s not as if people will be ditching their phones, but the ability to use the Apple watch independently increases its value. With a 70% faster dual-core processor, the Apple Watch will be equipped with a W2 chip that we are told will offer “85% faster WiFi” and be “50% more power-efficient.” You will be able to connect to a cellular network just like with mobile phones and it should be pretty smooth and fast (depending on your signal strength). Also, the watch switches seamlessly to cellular when it is away from an iPhone. Different plans will, of course, vary according to region and carrier and probably add a bit to your bill. Apple says they have deals set up with a number of carriers around the world. Does all this mean phone calls from your wrist like a secret agent? Well, yes, as the Apple Watch Series 3 is equipped with speakers and a microphone. You could also use something like Apple’s wireless earphones (with microphone) called AirPods to make calls via the Apple Watch – hands-free, phone-free, and a bit more discreetly. I must say that the idea of a future where my pockets are liberated of a wallet (e.g., ApplePay), phone, and keys is enticing. The basic look of the Apple Watch is largely unchanged. It is still available in 38mm and 42mm sizes – remember that these are vertical lengths, which give a much better idea of how it will fit one’s wrist than the width measurements traditional watches tend to use. With antennas, radios, power amplifiers, and an eSIM that is over one-hundredth the size of a traditional SIM card, it is remarkable that Apple has been able keep the thickness of the Apple Watch Series 3 essentially unchanged from past versions and battery life at “all day” (I believe 18 hours) – with the all-important caveat that “battery life varies by use and configuration.” Also noteworthy is the fact that Apple managed to integrate an antenna design capable of serving as both a transmitting and receiving element for LTE and UMTS right into the display itself – a considerable achievement that also keeps thickness to a minimum. Apple has partnered with the likes of Nike, Nintendo, Disney, Hermes (hands-on with the Hermes editions here), and others over the years to offer exclusive versions, features, or special editions. For the Apple Watch Series 3, there is a new Sport Loop, new colors for the Nike+ edition, and Hermes leather bands and watch faces. Nothing groundbreaking, but the Apple Watch needs as much customizability and personalization as possible. Between the different materials, colors, and strap options, Apple has done their best to give people the ability to express their personal style – of course, it will always look like an Apple Watch. The “bands,” as Apple calls them, from previous generation Apple Watches will fit the Apple Watch Series 3, it seems, and there will be new styles for a range of different uses and scenarios. The easy strap changing system means one can change the look and feel of the Apple Watch for different occasions – we reviewed and compared Apple Watch bands and bracelets here. The Apple Watch Series 3 will come with WatchOS 4 announced at the WWDC 2017 in June, which brought Siri, new watch faces, and other features.

As for an always-on state setting in order for the Apple Watch not to look like a lifeless black slab on the wrist, it seems that battery life remains the priority. Similarly, although Apple offers its own watch faces, allowing third-party watch faces – like the 30,000+ available from the Facer platform for Android and Tizen – is also not in the cards for this release. An always-on watch face state and more watch face options are both features we have felt are lacking from the Apple Watch since its debut and that we still hope to see. Fitness applications have become central to convincing consumers of what smartwatches can do for them. In addition to the features introduced in WatchOS 4 such as GymKit, Apple is making greater use of its heart-rate sensor, which it says is the most used heart rate monitor in the world. New displays for heart rate on the main watch faces will be added along with greater ability to track things like resting heart rate and recovery heart rate. Medical uses such as detecting abnormal heart rate or rhythm are other interesting features being added along with something they are calling Apple Heart Study.