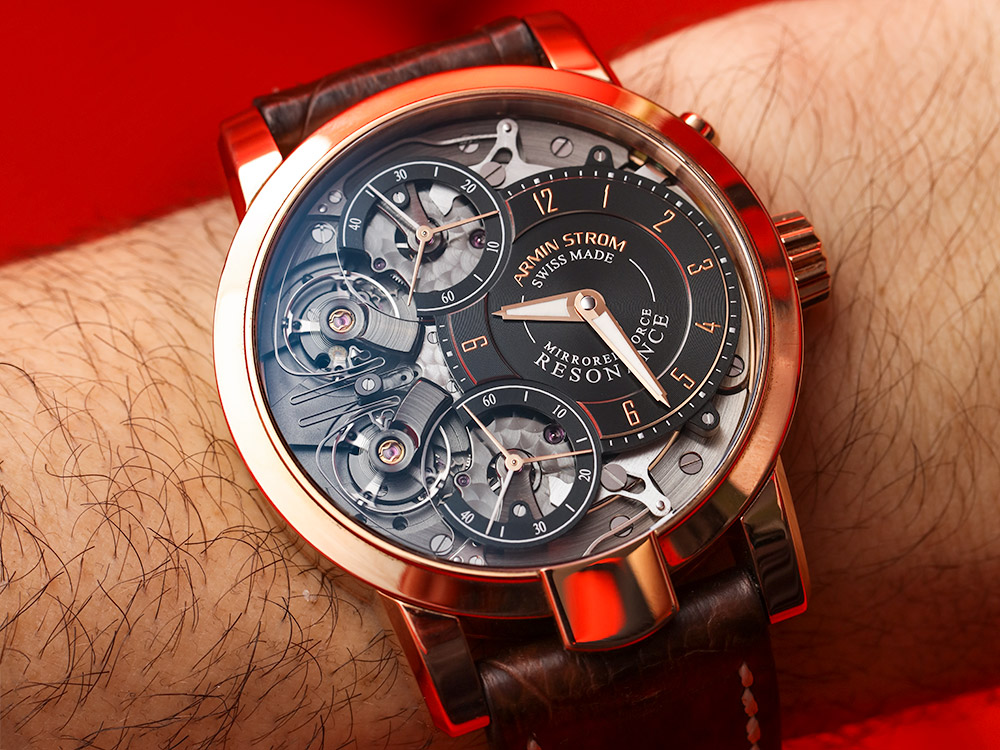 I was really surprised last year when Armin Strom announced their Mirrored Force Resonance watch. I always regarded them as a brand that makes some interesting watches, but they never really made a strong impression on me until this watch came along, which also happens to be the most complicated model that Armin Strom now makes. Join us as we get up close with this wonderfully impressive piece and let me tell you why this watch is so special. The Mirrored Force Resonance watch is so special because it joins a small and elite group of watches that rely on the principles of resonance to improve timekeeping. For readers who are not familiar with resonance, it refers to the phenomenon in which a vibration or external force drives another system to oscillate with greater amplitude. In watchmaking, it typically refers to the use of two oscillators beating in close proximity to strengthen their beat rate. The idea is that if resonance takes place, the two oscillators will begin to beat in sync with each other and with greater stability. This, in turn, translates to higher precision and better chronometric performance. This idea was first thrown around by highly renowned French watchmaker Antide Janvier and Breguet over two centuries ago, and Breguet even made some watches based on this principle. The idea may sound simple, but in practice, such watches are incredibly difficult to manufacture and regulate, which explains why very few modern manufacturers and watchmakers even make them. Apart from the Mirrored Force Resonance watch from Armin Strom, only two other resonance watches come to mind; F.P. Journe’s Chronomètre à Résonance watch and Beat Haldimann’s H2 Flying Resonance. The Armin Strom Mirrored Force Resonance watch, therefore, joins a very exclusive club of watches. The crown is rather thick and muscular, which makes winding a breeze and above the crown is a pusher at 2 o’clock. This pusher is one of the neatest and coolest things about the watch because it lets the user instantaneously reset the two seconds hands. So the idea here is to wind the watch and let it run for a bit and then reset the two seconds hands and let them run and achieve resonance. Overall, the case is neatly finished and a small detail that some readers might not notice is that there’s a small lip on the bezel at 6 o’clock. This is a design trait of early Armin Strom watches where owners can choose to engrave their initials or whatnot on the watch. Owners of the Mirrored Force Resonance watch can choose to do the same if they wish or leave it as it is. The dial is the best aspect of this watch because unlike F.P. Journe’s Chronomètre à Résonance, whose movement can only be admired through a sapphire display case back, the two resonating balance wheels of the Mirrored Force Resonance watch are visible from the dial side. A quick glance of the watch is all you need to remind yourself that you are wearing something that is very special on the wrist.