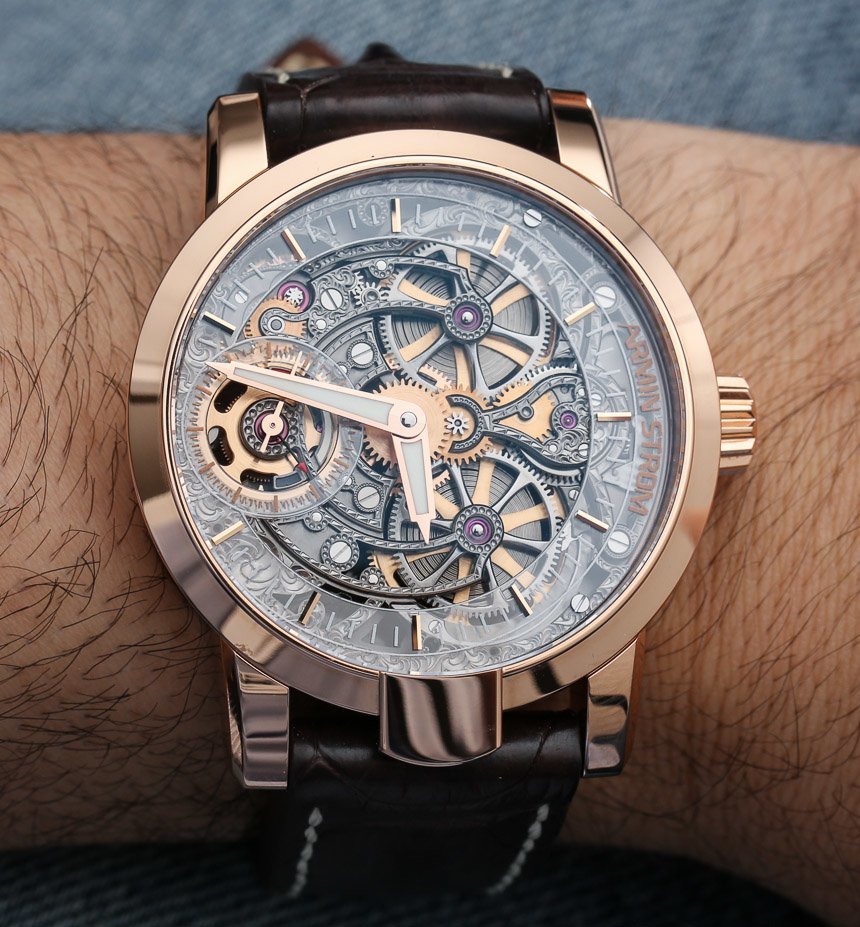 I admit to not having the most healthy relationship with the Armin Strom One Week Skeleton watch. Typically, I am really respectful around pretty watches, but I may have some apologizing to do. Don’t get me wrong, I am just as much a man as the next guy, but I certainly don’t want to make a really good looking watch feel uncomfortable by ogling in public. Pretty watches tend to know it and probably prefer that people think of them as ordinary timekeepers rather than something to really admire and stare at. Usually I do the polite thing.

We all have our weaknesses though. When I first heard that Armin Strom had created a limited edition timepiece that combined their ability to make in-house movements with their talents for decorating and engraving, I didn’t pay it much attention. I tend to be really busy and I see stuff like that all the time– well at least I thought so. Imagine my surprise when after seeing many thousands of nice watches and being able to keep my cool, I discovered a new piece that, without trying to be anything special, really captured my attention. I walked away from it easily enough, and then found myself starting to think of the One Week Skeleton lying naked on my bed while I daydreamed. What was happening to me? It took a while before I realized that I was getting obsessed. I started by trying to understand my attraction to this watch. Why this particular watch? On paper, the One Week Skeleton isn’t even my type. It starts with Armin Strom’s in-house made ARM09 manually wound movement. I don’t even normally like manually wound’s, and tend to prefer automatics, but this one was an exception. The ARM09 is manually wound but it also has a power reserve of one week. On top of that, Armin Strom designed a power reserve indicator in the subsidiary seconds dial located at 9 o’clock so you know when to wind it–a feature that really makes it OK in my book to wear something manually wound.

For the One Week Skeleton, Armin Strom fully engraved and decorated the ARM09 turning it into the ARM09-S. That process took about 10 days, and they have to do it for each movement individually, as the process of engraving is done by hand. There will only be 50 of them, meaning that the One Week Skeleton isn’t just the product of a lot of work, but also a rare one at that. What I later learned is that it even has a fair price. Learning all this was just too much to not consider the One Week Skeleton watch the right watch for me. So I started following it home and stalking it online. Turns out that all my secret attention just made things worse. I was hoping that after looking at the One Week Skeleton in private for long enough I would just get over it and consider it just another temporary watch infatuation. This time however I think the horological lust goes too deep. Set in a 43.40mm wide case produced from polished and brushed 18k rose gold, Armin Strom includes their customary “case tab” for the purpose of a signature. That’s right, they will put your initials right on the case to notate your ownership of their watch. How I want an “AA” on the One Week Skeleton so badly!

It fits nicely on the wrist without being too large or too small. Armin Strom completes the package with their typical use of a thick alligator hornback strap, here in brown to match the gold of the case. The tough demeanor of the case means that it wears larger than it is, but in good way given that this is a watch for your private and the public’s viewing pleasure.

The decorated dial is not without its animations. One of the most impressive is seen when winding the watch. The two skeletonized mainspring barrels turn when winding the crown, and the propeller-like designs have sections that cross over each other for each barrel that significantly adds to the animation. It may be true that the running seconds hand and power reserve indicator aren’t the most conspicuous things on the beautiful dial, but it matters little because the hour and minute hands couldn’t be more simple to see–they have applied lume as well.