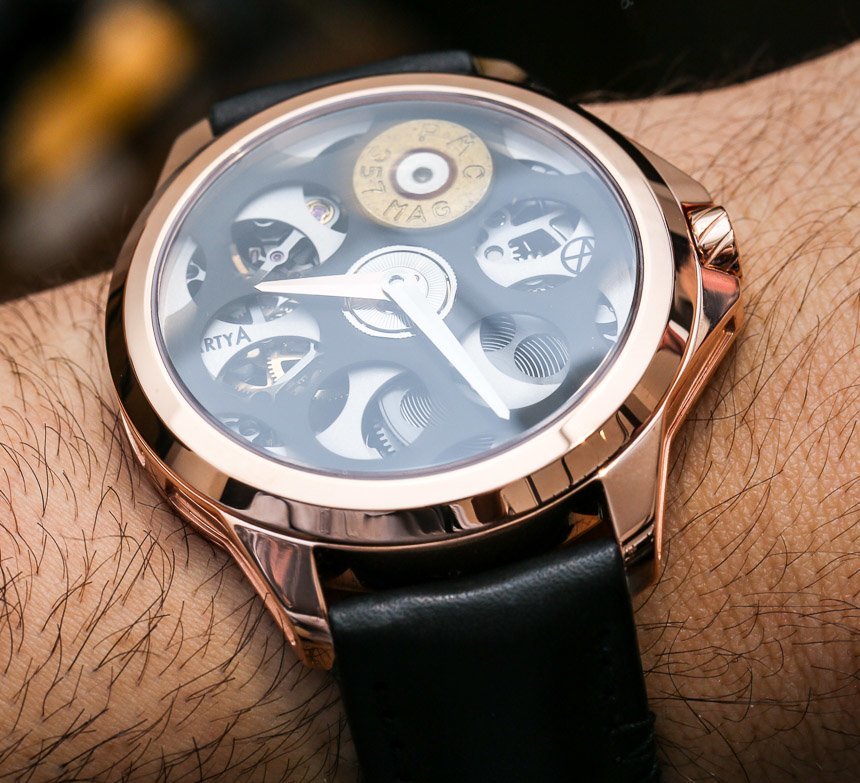 For 2014, the newest ArtyA Son of a Gun collection is the Son of a Gun Russian Roulette. In a sense, this a more visually entertaining, yet classically designed, version of the famed “bullet watch” family of timepieces ArtyA’s Yvan Arpa originally dreamed up in 2014. So let’s take a hands-on look at the watch with a dressy demeanor and the thrill of deadly games.

This is perhaps the only manually wound watch I’ve worn that nevertheless has an automatic rotor. Designed to look like a revolver cylinder with six bullet chambers, the dial-mounted rotor spins with the motion of one’s wrist and contains a single 357 Magnum round end which is hand-applied to the decorative face. The “six round” motif is placed on the watch in a few places. Behind the spinning dial rotor there is another plate with six holes in it, while the mainspring barrel in the movement is also cut with six holes. In many ways, the Russian Roulette looks very little like some of the other Son of a Gun collection watches. The biggest reason is the case. Here you can see a new, much more elegantly designed 44mm wide case that is very different from the larger and more industrial looking case many people think of when considering ArtyA. You can compare the Russian Roulette to these other Song of a Gun watches we looked at hands-on in 2012.

The new case is actually pretty nice. Even though it is a bit dressy being all polished, it still has sporty elements. Those include the integrated crown guards as well as the inset sections on the sides of the case. ArtyA had and will continue to have a lot of success with their larger 47mm wide case, but for those who simply couldn’t pull it off or wanted something a bit more mainstream, this new 44mm wide case will certainly please. The visual effect of the decorative bullet cylinder dial is interesting, and because Russian Roulette involves spinning a cylinder with one round in a chamber, it makes sense for there to be one bullet included. Of course, the actual game of Russian Roulette is morbid and rather scary, ArtyA likes to play with the concepts of life and death a lot in a lighthearted way. The brand’s founder Yvan Arpa himself has an interesting relationship with death and violence on a personal level. While he is himself a skilled martial artist and likes to wear skulls and other “heavy metal” style attire, he is in fact a deeply emotional and peaceful person who is much more the pacifist than an instigator.

The sides of the new case have lateral inserts in a new gold alloy called “ArtyOr.” The alloy is a mixture of gold, zinc, and also copper used from real bullet cartridges. So basically it looks a lot like rose gold, but with some “bullet time” in it. There also appears to be some case side inserts which are black, but the ones I saw all had the gold. These gold inserts come on both the steel case as well as the solid 18k gold versions of the Russian Roulette watches. One of the biggest characteristics of the ArtyA brand is the production of piece unique watches. That means that no two watches are like. An exception is being made for the Son of a Gun Russian Roulette watches in steel. These will be part of a limited edition of 99 pieces, and there will be a few dial versions. As you can see in the included images, one model in steel has a black spinning outer dial against steel, and another has the same dial against a gold middle plate.

The spinning “cylinder” is applied to the dial exactly as one would set an automatic rotor–on a ring of ball bearings, while the applied bullet-end creates the off-weight to make it spin. In the middle of the ball bearing assembly is where the hour and minute hands are set–which again use something new. Here you have brand new and rather classic hands, which is also something I would not have expected to see from ArtyA. I suppose Arpa is getting more traditional as he matures… A cool detail that takes the entire design back to its roll’n’roll spirit is the style of the strap buckle, as well as the criss-cross stitching on the strap. Inside the watch is a movement based on the Swiss ETA Unitas, but is a fancy version that is skeletonized and uses a lot of custom components. It is actually pretty great looking and the richness of the colors is both impressive and fun to look at. It can be rather fun to watch the movement operate even through the dial of the watch as the bullet swings around with the spinning rotor. It may not be the most intellectual timepiece in the world, but there is a masculine charm to it in the same way people like cowboy boots, big hats, large guns, and tall pickup trucks. I am starting to think Yvan Arpa needs to move his operation to Texas.

Did you enjoy the “motion blur” images of the Russian Roulette watch I attempted to take? Let’s just say the process of capturing motion blur and taking pictures of watches don’t go together all that well. In any event, I was glad to get some hands-on time with this new member of the Son of a Gun collection. In their own odd way, the collection is being refined and I think ArtyA is still having a lot of fun with these designs. If the idea of a watch with a bullet theme appeals to you, then this is perhaps your newest and best option yet. Price for the Son of a Gun Russian Roulette watch is 7,900 Swiss Francs in steel with the ArtyOr inserts (limited to 99 pieces) and 29,800 Swiss Francs for the solid gold versions that are each piece unique models.