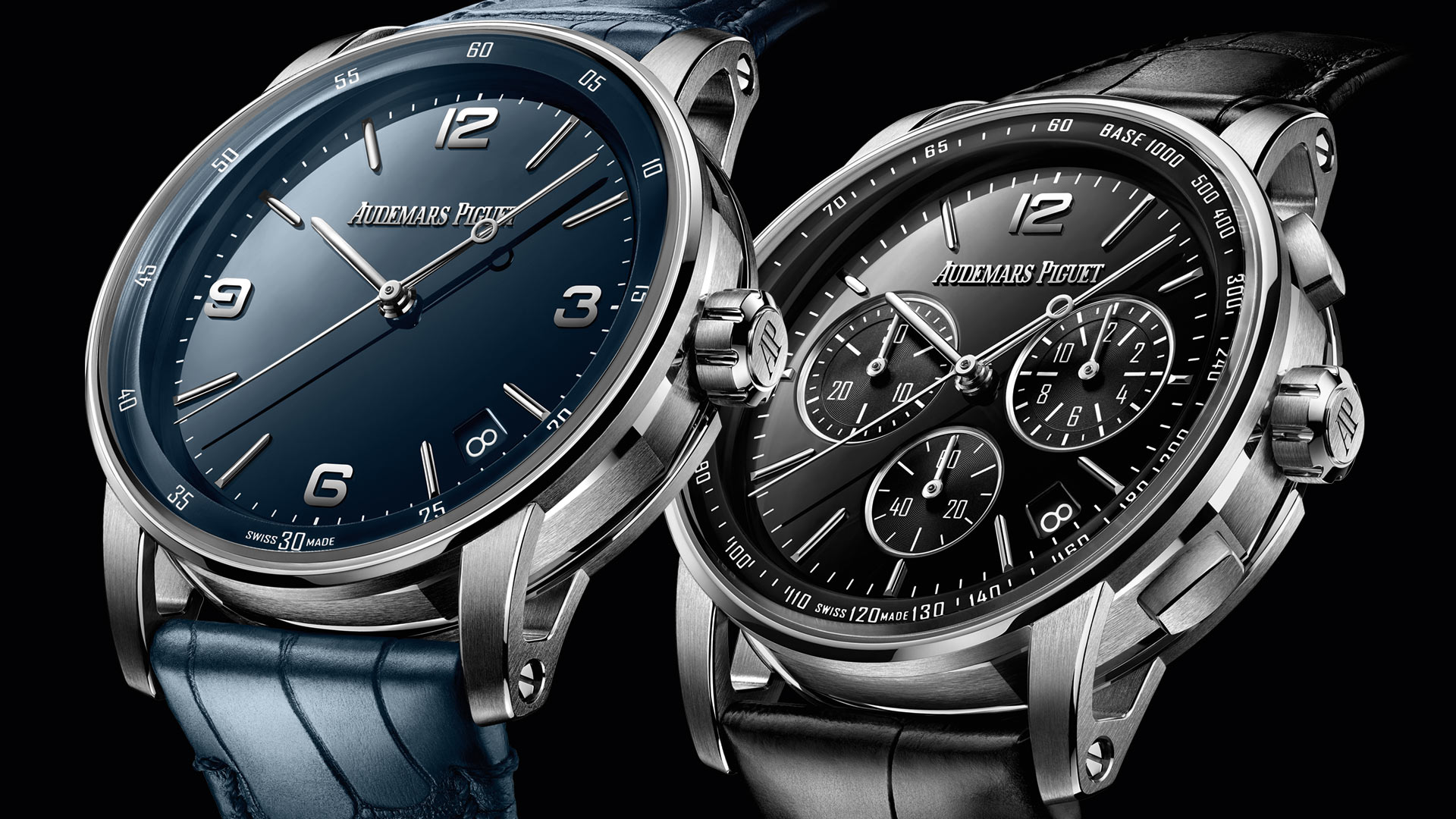 It’s hard to make something new. It’s especially hard to make something new when you’re breaking away from nearly forty years of reliance on one of the most iconic designs in the history of watchmaking. Such is the weight on the shoulders of Audemars Piguet, who just unveiled a massive new modern collection called Code 11.59 designed to do just that. With six original new models split into 13 references, including three new movements, Code is, in a word, ambitious. But is it the watch that everyone’s been waiting for, and is it enough to create a future where AP is known for more than just Genta’s stainless steel masterpiece? We’ve already talked about each of the new models: the Minute Repeater here, the skeletonized Tourbillon here, the Perpetual Calendar here, and the Self-Winding Flying Tourbillon model here. But the stakes are arguably higher for the standard three-hand and chronograph variants (which are also both 41mm watches, just like the aforementioned models), which will likely be the cornerstones of the collection. With these two watches, It’s hard to decide which is a bigger deal here: the entirely new case and on-trend dial aesthetic, or the the newly developed calibres – one of which happens to be the new in-house integrated chronograph movement that AP fans have long been begging for. These days, it’s pretty rare when a new collection comes along that doesn’t reference either the competition, or a brand’s historical models. But the Audemars Piguet Code 11.59 watches aren’t really either – for better and for worse. At best, the dial on the new three-hander is sleek and modern, with smooth lacquer punctuated by gold baton indices, applied 12-3-6-9 Arabic numerals – which look vaguely like those used on last year’s JLC Polaris we saw hands-on here – and a date aperture at 4:30. The chronograph is understandably busier, but feels as though it’s the most faithful to Audemars Piguet DNA, with modern numerals throughout, gold surrounds for the registers, and a sporty tachometer in lieu of the 60-minute chapter ring on the three-hand variant. At worst, neither dial design really challenges the viewer – they feel safe and trendy, and not the type of disruptive stuff that solidified AP in the pantheon of modern luxury watchmaking. As mentioned, both watches are fitted with brand new movements: Calibre 4302 is deployed in the three-hand variant, which is a 4Hz movement with 70 hours of power reserve. That movement is actually in the same family as the real star of the show here: the new automatic Calibre 4401, which is the fully integrated, in-house manufactured chronograph that AP fans have long wished to be brought to the Royal Oak family. This column wheel-actuated flyback chronograph movement bears the same chronometric numbers as the 3-hand version (4Hz, 70 hours of reserve, instant date jump), but also has a skeletonized gold rotor granting the viewer a more expansive look at the movement. Movement and dials aside, it seems like the CODE really needs to be seen from the side or at an angle to fully appreciate the dramatic architecture of the openworked lugs and the octagonal middle case body. Each of those brushed lugs flow neatly into the beveled & polished lines of the bezel (they are actually welded to the bezel, after all), forming a dynamic, multi-faceted surface area that’s simultaneously strong and elegant – both hallmarks of AP’s most iconic historic designs. It’s here in these shapes where the new Audemars Piguet Code 11.59 collection feels as though it’s able to really carve out its own identity – one that we’re eager to put on the wrist for some proper firsthand impressions. We weren’t alone in shying from the opinion that AP’s showings at SIHH for the last several years haven’t exactly been wildly original. Even Audemars Piguet themselves haven’t been afraid to admit that the brand must be recognized for more than just the Royal Oak. But what we didn’t know, was that Le Brassus has long been hard at work on a collection designed to prove to its fans and customers that it was more than a one-hit wonder. But what Genta proved multiple times was that one doesn’t so easily create an icon on demand. Both the Royal Oak and the Nautilus fought for footing before gaining widespread acclaim. And if you could build an icon on-demand, every brand would do it, but it’s just never been that simple. The last five years have seen plenty of SIHH brands introduce entirely new collections – Vacheron’s FiftySix, the Piaget Polo, and JLC’s Polaris collection all come immediately to mind, but all three of them were slightly modernized re-adoptions of historical references. As an entirely new creation, CODE breaks that mold, but does it stray too far from what fans have come to expect to be commercially successful? It’s probably best that we withhold full opinion until we have a chance to go hands-on with all the new models in a few days here in Geneva. But for now, the only real opinion I have to offer is around the name of the collection itself: “CODE 11:59,” which is an acronym that stands for “Challenge, Own, Dare, Evolve,” and the timestamp representing the final moment before a brand new day (or one minute before you can break for lunch – just depends who you ask, and how you like to read the time) – presumably the milestone that AP believes it has just laid down. The whole forced meaning comes off a bit hollow, echoing the same hubris and designed-by-committee vibe that seems to be driving a lot of the early community feedback on the collection. For now, though, join the conversation below and let us know what you think about AP’s most ambitious new release since well, a lot longer than a good many of us have been following the watch industry. audemarspiguet.com