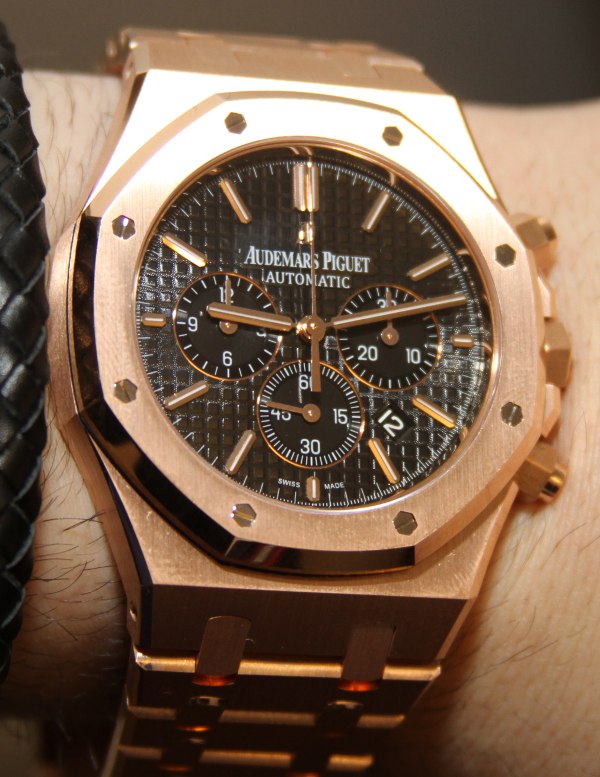 I have discussed how 2012 is the 40th anniversary of the Audemars Piguet Royal Oak watch. It was easy to anticipate that the brand from Le Brassus would focus on the Royal Oak and release a bevy of pieces both looking forward and to the collection’s past. They certainly did. There is nothing extremely novel, and I believe that for as long as we can imagine, Audemars Piguet will honor the core look of the Gerald Genta designed classic.

One of the most important pieces for the 40th anniversary celebration is the Royal Oak in a newer, larger 41mm wide case. The previous “Jumbo” model was 39mm wide. Even though there is actually a new Jumbo for 2012 – which is a redo of the original Jumbo – this 41mm wide Royal Oak set is the real jumbo for the year. It further will come in both three-hand and chronograph versions for 2012. With all the new Royal Oak watches Audemars Piguet did get a little confusing with the naming. I have to admit that they could have focused better on that element of the watches. It doesn’t matter though as people like me are just going to call this watch the “New Jumbo.” The official name for the three-hand model is the Audemars Piguet Royal Oak Selfwinding 41mm, and the chronograph is just called the Royal Oak Chronograph. Both come in 41mm wide cases that are water resistant to 50 meters.

Detailing on the cases and bracelets has never been better. As a “refreshed” Royal Oak, you’ll see a few changes other than just 2 extra millimeters added on to the case size. Let’s start with the Selfwinding 41mm. Inside the watch is the Audemars Piguet caliber 3120 automatic movement with a nice new 18k gold rotor. The rotor is engraved with a new design and looks very nice through the sapphire caseback window. The beautiful caliber also features a 60 hour power reserve. It does only run at 3 hertz, and moving forward I would like to see AP put a new movement in their Royal Oak that is a bit more modern and that operates at 4 hertz (or more!). That would give the seconds hand a smoother motion and arguably more accuracy. You can’t complain about the movement looks however. According to Audemars Piguet all Royal Oak watch dials are now made in-house. The mega tapisserie dial style has been replaced! The new one is called “grande tapisserie.” In addition to the raised blocks on the dial, there is small concentric circles over the entire dial for what is essentially texture on top of texture. The result is subtle but very attractive.

Unlike the Jumbo the AP logo is placed under 12 o’clock as opposed to over 6 o’clock. For the hands and hour markers there are small but important changes. First, they are no longer really rounded. Audemars Piguet went with inspiration from the newer Royal Oak Offshore actually in making the hands and longer baton hour markers. Ironic how the classic piece took inspiration from the new piece. You’ll notice how on them both the edges are more beveled than they are rounded. The new look is more modern and helps update the look of the dial. It sort of all reminds me of Rolex, and I playfully consider this to be AP’s “Maxi Dial” version of the Royal Oak (a few years ago Rolex updated the Submariner with a new dial with larger indicators that they called the Maxi Dial). The new dials are overall really impressive and I think even purists who are skeptics will like the new ones. Also new is an improved bracelet deployment clasp. This is something people have argued the Royal Oak needed for a while. The upgrade is really nice. It is simple, but the detailing is quite lovely. Functionally the Royal Oak now comes with a locking push-button deployment clasp and it looks really nice when closed.

In addition to the Selfwinding 41mm is a new Royal Oak Chronograph model. Inside that watch is an Audemars Piguet caliber 2385 automatic chronograph movement that looks lovely in the larger case size. Unlike the Selfwinding, the Chronograph does not have an exhibition caseback. Both models come in 18k pink gold and steel for 2012. There are a lot of dial color options as well. Available for both ranges are silvery white dials, black dials, and dark blue dial options. The blue actually looks quite nice with steel. So the question for most people is how does the 41mm size look? Big? Too big? Not big enough? I would say just right. The 39mm wide version was always a watch that wore large. The same goes for the 41mm wide version. It look like a 42-43mm wide watch and is also nice because it has a relatively thin profile. For me the new larger size is more ideal for my tastes. It will also help win over a lot of guys who up until now have only been wearing Royal Oak Offshore watches.

People have a lot of size options these days when it comes to the Royal Oak Offshore. For 2012 alone Audemars Piguet is releasing versions of the Royal Oak in 37mm 39mm and 41mm wide versions. Lots of fans will go for the limited models and the redo of the classic Jumbo (also 39mm wide). For me this 41mm wide version is a winner. The Chronograph is a cherry model and the three-hander is an ideal formal or daily wear watch. Comfortable, classy, and very masculine. Pricing and availability are going to be the biggest issues for most people. Audemars Piguet already has a reputation for taking a long time to finally make the watches they announce and pricing is really expensive – especially for steel watches. Hey, I mean we are talking about the brand that charged gold watch prices for a steel watch with the original Royal Oak. Don’t expect going into an AP dealer and walking out with a budget watch. Though the brand cache and residual value aren’t half bad. Despite the cost I can at least say that watches like this are among those I eagerly await being able to own someday. Look for the 41mm wide Audemars Piguet Royal Oak watches to be in stores later this year. Easily one of the most desirable pieces of SIHH 2012. Prices for the Royal Oak Selfwinding are $16,900 in steel, $33,800 in 18k rose gold on a strap, and $64,800 in rose gold on a bracelet. The Chronograph is $23,900 in steel, $45,500 in 18l rose gold on a strap, and $70,800 in rose gold on a bracelet.