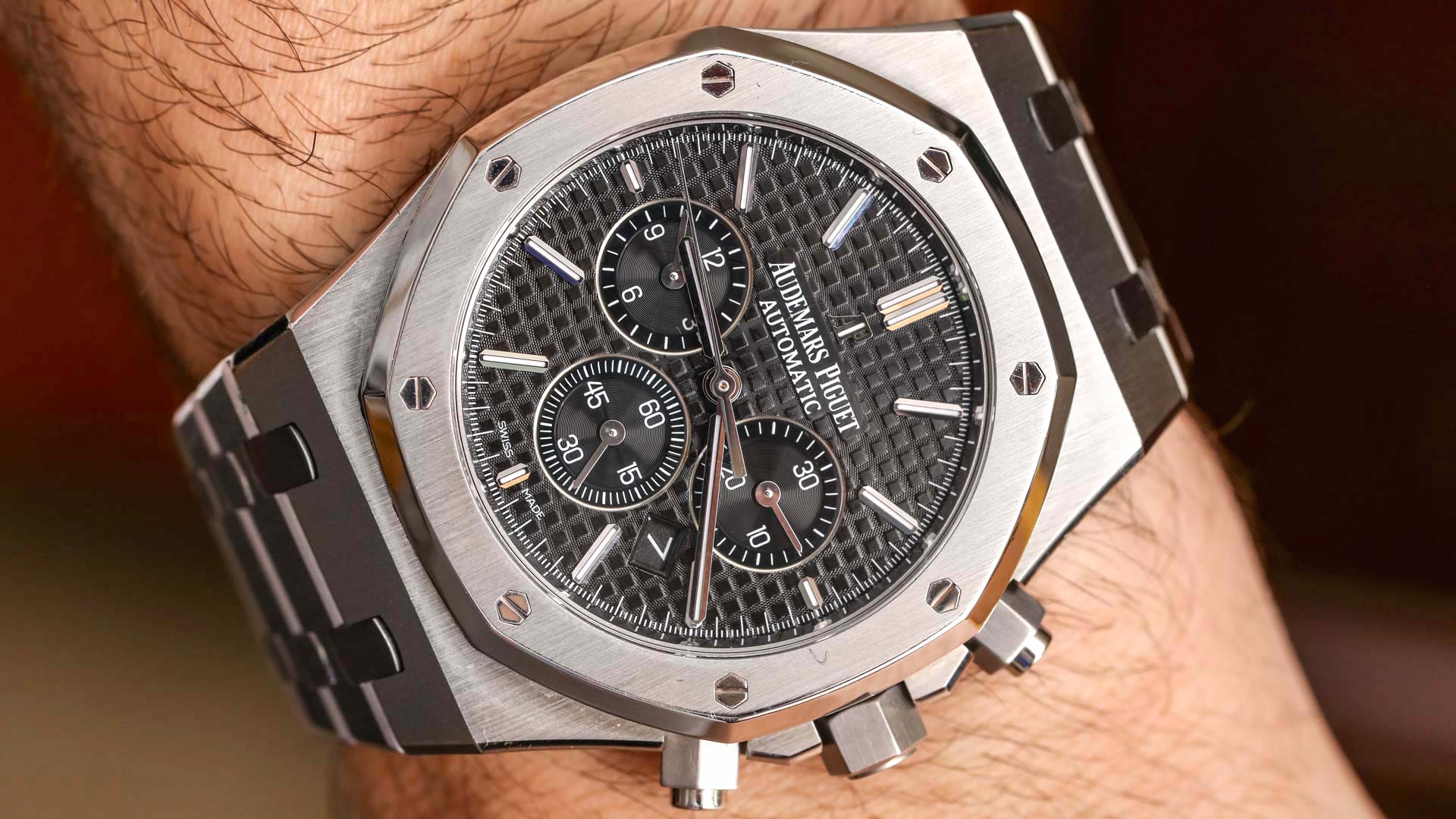 The Audemars Piguet Royal Oak is one of the most recognizable luxury watches on the planet – and it also happens to be quite good looking. These two things taken together have helped this more than 45 year old design turn into both an icon and one of the most in-demand pieces of men’s jewelry you can find; and as such we included it among our “top 10 living legend watches to own” article. And “men’s jewelry” is a term that I feel adequately describes the appeal of this timepiece. For this review I take a look at the 41mm wide version of the Audemars Piguet Royal Oak Chronograph. Other sizes and styles certainly exist, but this is the most modern (and largest) iteration of the famed Audemars Piguet Royal Oak Chronograph ever.

You can’t be a watch expert (let alone watch lover) without studying the work of the late watch designer Gerald Genta. He is most well-known for a series of luxury sport watches he designed for brands such as Audemars Piguet, Patek Philippe, IWC, and Bulgari. While Genta’s relationship with the Audemars Piguet Royal Oak design ended decades ago, you can’t really understand the watch’s concept without knowing what he was intending to do with it. Audemars Piguet has been a loyal and impressive caretaker of the design, which represents the vast majority of sales at the brand.

When the Royal Oak was first introduced, Audemars Piguet boldly and proudly announced in its own marketing materials that the Royal Oak was a steel sports watch priced just like a gold one. Was that just rich-boy puffery designed to further alienate the masses who could not afford such items? Not exactly. Most Audemars Piguet Royal Oak watches out in the market aren’t sold as a function of their movement or complexity. Yes, there are some exotic models with a perpetual calendar complication or a minute repeater – but this isn’t what the Royal Oak is all about. In fact, I have a very strong feeling Gerald Genta himself never even intended for there to be anything but a three-hand version of the Royal Oak, which means that something like a Royal Oak Chronograph is more a modification of his original design intent as opposed to building on it. Gerald Genta famously quipped that he himself was not a watch lover. In my opinion this statement has been taken out of context and really means that Genta was more focused on the exterior wearable part of the watch as opposed to the horological elements on the inside. At the time when Genta was in the heyday of his design career he can clearly be seen rejecting the traditional “generic” exterior look of most watches (especially luxury ones) but introducing a series of novel ways to imagine a watch case and bracelet. It is in those latter areas where he excelled the most and his prescience on this subject was not only ahead of his time but clearly captures the emotions many luxury watch wearers have today. Both Gerald Genta and Audemars Piguet likely agree that your wristwatch being both distinctive in appearance and recognizable to others are necessary components of a wristwatch becoming more than just a nice product, but a genuine personality unto itself. A discussion of Gerald Genta’s later design work and the contents of his eponymous brand are a subject for an entirely different discussion. With that said, it is important to understand the body of his work as well as the themes he was interested in to understand where the Audemars Piguet Royal Oak came from. Genta was a fan of the sea and all things nautical. He was also a fan of simple dials which were legible and told the time easily. If you take a look at the three-hand versions of both the Royal Oak and Nautilus, you will agree that the watch dials focus on being simple, legible, and just a little bit decorative.

Genta was never all that interested in revolutionizing watch dials through most of his career. Rather, he seemed to mostly care about the watch case and bracelet, and how they might integrate together. The Audemars Piguet Royal Oak was one of the first watches I can think of where the bracelet and case are not only truly integrated, but designed to go with one another. In fact, I like to see his watch designs more like bracelet designs. High-end, nice looking, masculine, and showy bracelets which also just happen to tell the time. The introduction of additional complications to the Royal Oak is a more modern evolution of the product collection intended to ensure that the Audemars Piguet Royal Oak fits into as many product categories as possible for as many potential customers as possible. The Audemars Piguet Royal Oak Chronograph takes the most popular complication (in addition to the time) and marries it to one of the most successful watch designs of the 20th century. What it lacks in “purity” it makes up for in emotional appeal for consumers who both like the look of a chronograph with its extra sub-dials on the face and the look of extra pushers on the case. Audemars Piguet itself seems to implicitly understand this given that the movement inside the watch is nice, but hardly revolutionary. Decorated with love and an excellent attention to detail, the Audemars Piguet caliber 2385 automatic chronograph is at the same time rather “old-school” in its performance. It operates at 3Hz (21,600 bph) with a power reserve of 40 hours. The chronograph is a module on top of an older movement design, but still manages to achieve a decent level of thinness. While the three-hand version of the Audemars Piguet Royal Oak is the clear winner when it comes to case thinness, the Royal Oak Chronograph 41mm is still comparatively slim to many other chronograph watches out there being just 11mm thick (the three-hand Royal is about 8mm thick).

Audemars Piguet further doesn’t show off the movement in most Royal Oak model watches, which means you can’t admire the solid gold engraved automatic rotor or the attractive level of finishing on the movement through the solid steel caseback. At 41mm wide the Audemars Piguet Royal Oak Chronograph is a hefty timepiece made from a lot of high-quality stainless steel. Recall that the “Jumbo” version (as it is often called) of the Royal Oak is just 39mm wide. The case has a relatively long 53mm lug-to-lug distance and the wearing size is visually increased due to the widely spaced lug structure. Water resistance is just 50m, which is more than enough for daily wear but I think 100m is a more competitive number if Audemars Piguet wants to push the “sporty” side of the Royal Oak more. Comparisons to the Patek Philippe Nautilus and the Audemars Piguet Royal Oak are extremely common and logical. Currently Patek Philippe charges a lot more money for the three-hand Nautilus than Audemars Piguet does for a similar model. In fact the Royal Oak Chronograph 41mm is currently less expensive (by close to $5,000) than the retail price of the three-hand Patek Philippe Nautilus. I wouldn’t look to this price difference as a real indicator about value differences and in my opinion, this price difference is more about marketing and brand positioning.

This is also a good instance to say that if you are trying to decide between the two, the Audemars Piguet represents the superior value (which is a rare thing to say about the typically high-end pricing strategy of Audemars Piguet). I personally prefer the sharper angles of the Audemars Piguet Royal Oak’s case and bracelet to that of the Patek Philippe Nautilus 5711 watch that I reviewed on aBlogtoWatch here. This is a matter of personal taste, and it is because I feel that the Royal Oak is a bit more edgy, masculine, and bold compared to the softer and more genteel lines of the Nautilus. Both watches are clear cousins and are each inspired by the world of boats. Audemars Piguet envisioned the Royal Oak to be the perfect sport watch to wear while on your sailing boat or yacht. Genta himself designed the iconic eight-sided bezel of the Audemars Piguet Royal Oak after the design of some ship hull windows. From his home in Monte Carlo, it is not difficult to imagine Mr. Genta spending an awful lot of time gazing at some of the world’s most expensive and interesting ships to draw design inspiration from.