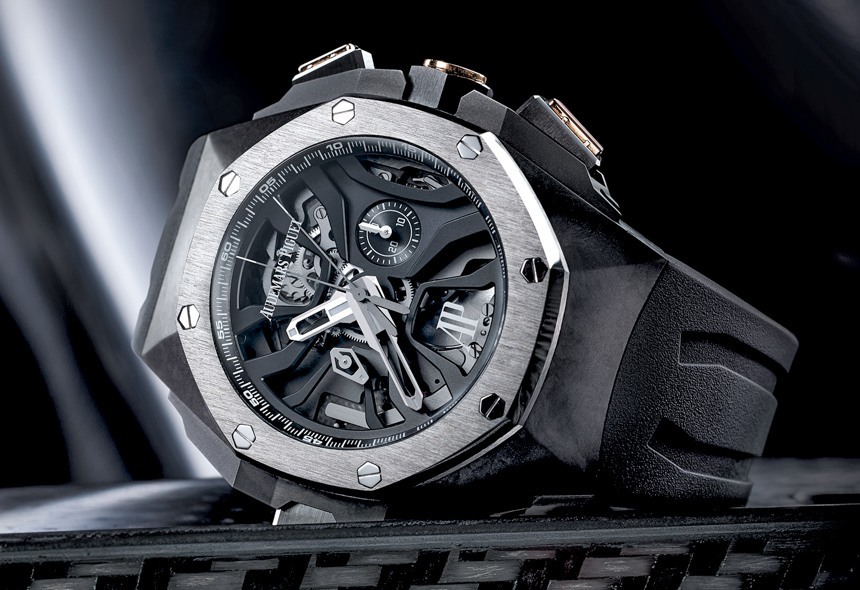 This is the Audemars Piguet Royal Oak Concept Laptimer, a brand new “RO Concept” that I feel may very well be the most striking Royal Oak iteration since the Offshore Survivor. As its name suggests, this brand new, highly complicated movement was created to be able to measure and record a series of consecutive lap times. Such a watch was commissioned back in 2010 by Audemars Piguet ambassador and 7-time Formula 1 world champion Michael Schumacher, and it took the manufacture almost five years to come up with a solution – and fit it into what else but the Concept case, dressed in forged carbon and titanium. In discussions with master watchmakers over the last few years, I have often taken the opportunity to ask, when creating a new movement from scratch, what complication is the most challenging to conceive and produce. I would venture saying that the single-axis tourbillon, no matter how tirelessly fascinating and beautiful, was not once mentioned: it was more of a dead heat between chiming mechanisms (grand sonnerie and minute repeater) and simple column-wheel chronographs. Split seconds chronographs are so rare, they were scarcely mentioned, but the fact of the matter is that it is one of the absolute most challenging functions to have ever been crammed into a wristwatch movement, and they are of course much more difficult to produce than their normal counterparts. To understand how the Audemars Piguet Royal Oak Concept Laptimer is new, we must first see how your bog standard split seconds chronograph works. Also known as a rattrapante chronograph, what it usually does is allow one to measure intermediate times. This is made possible by the chronograph’s not one, but two central seconds hands: when the chronograph is started, the two, overlapping hands start moving together. By the press of a secondary button, one of the hands stops, marking an intermediate time, while the other keeps on running. With another press of this secondary button, the hands are reunited. Technically complicated and very difficult to manufacture, but not entirely useful when measuring several consecutive lap times. As the story goes, in 2010, the year he became AP’s brand ambassador, Michael Schumacher commissioned the brand to create a mechanical chronograph that would allow him to not only measure, but record several consecutive lap times. Schumacher has been much more than a hugely successful racing driver: until his horrific skiing accident, news of which shocked the world in late 2013, he has been actively training the next generation of racing drivers. Sitting on the pit walls next to the race track, racing team managers and drivers are to this day often seen using stopwatches to measure lap times, stepping away for a moment from the armada of high-tech gadgetry that they rely on otherwise. The Audemars Piguet Royal Oak Concept Laptimer is different to other split seconds chronographs in that it blends a rattrapante with a flyback chronograph in a very interesting way, that allows one to measure, record and display a record time with one seconds hand, while the other can be stopped, reset and restarted independently from the recorded time – and all this happens with the press of just one button, the one located at the 9 o’clock position and that is bearing the MS logo. In practice, when a car starts lapping a track, the chronograph is started. As the car does its first time (which will of course be the first reference time in the session), the button at 9 is pressed, stopping one of the hands to display the recorded time, while the other gets restarted at the exact same time to start measuring the second lap. My understanding is that the record time can be left intact until it is beaten. That means, using the reset button at 4, the other seconds hand can be restarted with the flyback function as many times as necessary to time consecutive laps until the record has been beaten. For all these functions to work flawlessly, a massive and highly complicated movement had to be created. As you see in the image above, the skunkworks of Audemars Piguet Renaud & Papi (whom we visited last year) installed a metropolis of gears, wheels, cams, and springs onto the back of the movement. The component count of the 34.60 millimeter wide movement totals at 413 – that is a lot for a watch that has “just” one added function, and shows just how complicated that one complication is. Unlike normal chronograph calibers, the hand-wound 2923 caliber comprises not one, but two column wheels. Judging from the guaranteed 80 hours of power reserve, we can tell that there will be sufficient power and torque coming from the mainspring to ensure accurate timekeeping. At 44mm wide and 12.70mm thick, the Audemars Piguet Royal Oak Concept Laptimer is relatively sensibly sized, especially when taking all the tech inside into consideration. The large, protruding pushers and case extensions surely add to that 44mm size, but the Concept case with its angled lug structure and the relatively slim shape should handle that well. The Audemars Piguet Royal Oak Concept has seen many iterations over the years, but this one with a forged carbon base, titanium bezel, and crown protectors, set alight with pushers in pink gold and black ceramic, could just be the strongest member of this slowly but surely expanding family of highly complicated Royal Oaks.

The dial has large openings to show off some of the movement parts, including a column wheel at 12 o’clock, and, while skeletonized hands don’t often work well on open-worked dials, these white gold hands with luminescent coating are so wide and long that they not only look terrific, but are highly legible. With everything being so over the top here, I wish the small minute counter sub-dial was a bit bolder in its design, matching the bespoke look of any and all other components of the dial. The Audemars Piguet Royal Oak Concept Laptimer (reference 26221FT.OO.D002CA.01) will be available in a limited edition of 221, the number of Formula 1 Grand Prix races in which Michael Schumacher competed. Price is $229,500 for one of the 221 numbered pieces. audemarspiguet.com