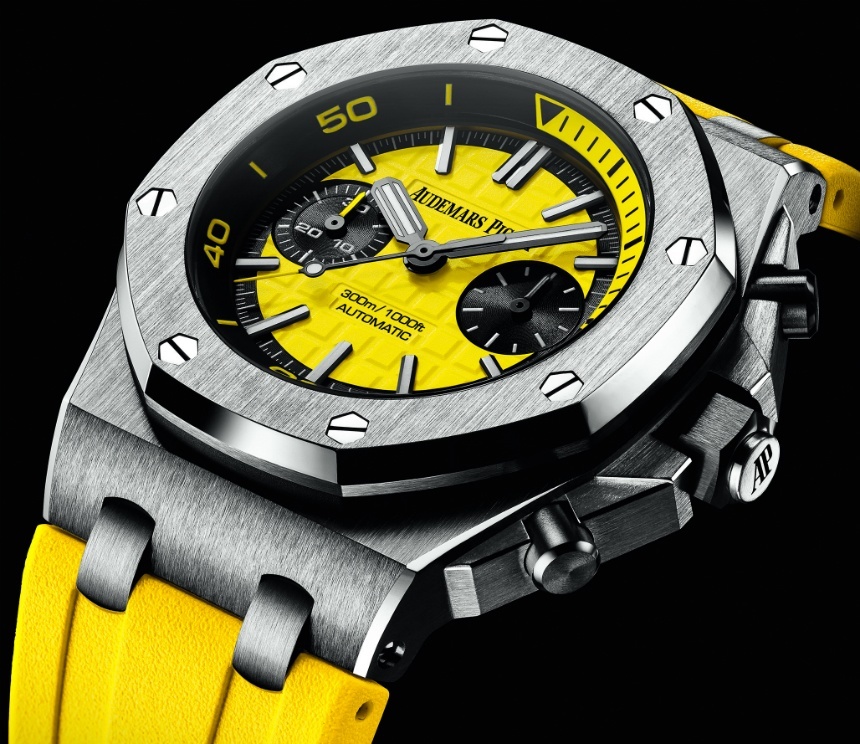 The calibre 3124/3841 is made up of 364 parts and operates at 3Hz (21,600 bph). Once again, I am going to chime in requesting that Audemars Piguet develop a 4Hz chronograph movement for their sport watches. Power reserve is 50 hours, and the movement uses a lovely gold automatic rotor – which, in this instance, you unfortunately cannot see, as there is a solid caseback.

The Audemars Piguet Royal Oak Offshore Diver was not only intended to be the brand’s first serious diving watch, but was also meant to offer a cleaner time-only dial. Here, we get what is arguably among the more simple chronograph dials across the entire Royal Oak Offshore collection. At 42mm wide in steel, the Audemars Piguet Royal Oak Offshore Diver Chronograph watches are water resistant to 300 meters and have an inner rotating bezel that is operated via the black ceramic crown positioned at 10 o’clock. Additional black ceramic pushers are used for the chronograph, and the main crown is also in black ceramic (with a metal interior segment). In terms of availability, Audemars Piguet continues with the increasing trend of making a lot of appealing watch models available exclusively in Audemars Piguet brand boutiques stores. While this might seem like an arbitrary way to get customers in to brand boutiques, it is part of an important and larger overall strategy in the watch industry to focus on more vertical integration as brands both produce timepieces and sell them directly to customers. In the long run, this will lead to benefits for consumers, as it is the only viable option to allow for price stability and gradual elimination of the gray market (which actually causes retail prices to go up).

Again, as the debut collection, these four colorful models of the Audemars Piguet Royal Oak Offshore Diver Chronograph are meant to make a bold statement and are probably some of the “funnest-looking” yet serious luxury sport watches I’ve seen in a while. I am pretty sure that future models will nevertheless offer more “conservative” tones for those people who don’t think they can pull off lime green on a daily basis – no matter if it is on an Audemars Piguet or not. Price for the Audemars Piguet Royal Oak Offshore Diver Chronograph is $27,900. audemarspiguet.com