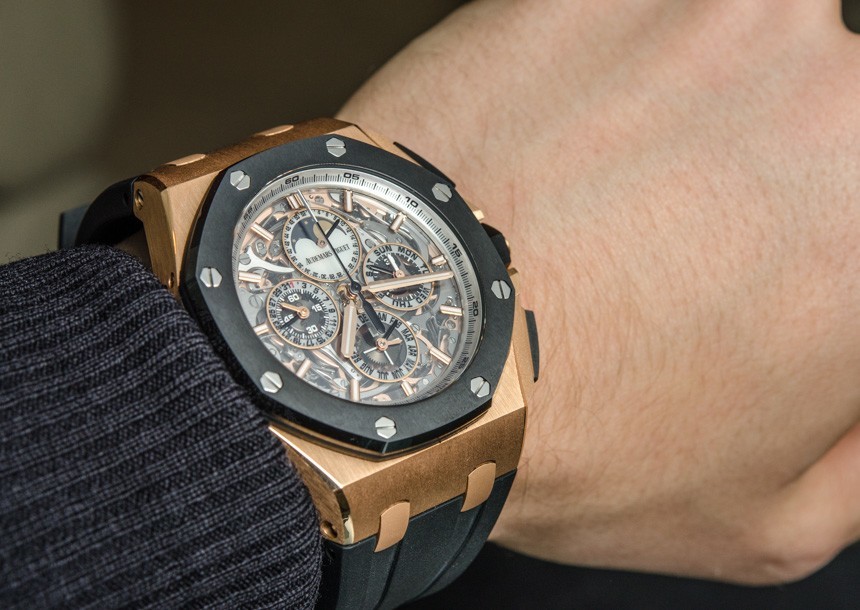 “Welcome back to an original aBlogtoWatch feature, My First Grail Watch.” Well, no, that’s not entirely right. This is not another chapter in our Grail Watch series of articles, but then again, it could be. Late last year, upon visiting the highly exclusive London watch retailer Marcus in a quest to interview them for our Where To Buy Watches series, I had the extremely rare opportunity to encounter a highly elusive piece that has for long been reigning at the top of my “watch bucket list”: the Audemars Piguet Royal Oak Offshore Grande Complication. Grand and Complicated it is, in every sense of these words. The massive movement (Caliber 2885) is 31.60 millimeter wide and 8.55 millimeter thick, and it needs all that space to comprise a total of 648 parts. As any grand complication, beyond indications for the hours, minutes, and seconds, it offers a chiming mechanism (a minute repeater with two gongs, in this instance), an astronomical mechanism (here, a perpetual calendar with the date, day, month, phase of the moon, and leap year indications), as well as a stopwatch function (which, in this case, is a 30-minute chronograph with split-seconds or “rattrapante” complication). Complexity on its own, while certainly mind-boggling, is not what makes most grand complication watches special. Instead, it is the combination of complexity with excessive attention to detail and level of refinement – and, as we will see, when it comes to this AP, there’s another element. That other element is interesting because the grand complication, as previously described, is traditionally accepted to be the most complicated movement design – with ultra-modern complications and new ways for displaying the time notwithstanding. As such, we have seen numerous – easily a dozen or more – major manufactures try themselves to creat a watch with the exact same list of complications that we mentioned above.

Where the Audemars Piguet Royal Oak Offshore Grande Complication stands out the most is that it offers a blend of this extremely high level of complexity and refinement with a sporty looking case – replacing the round and more conservatively styled cases of most of its alternatives with the bold (and perhaps a bit “loud”) case of the Royal Oak Offshore. And while we should not let the rugged looks fool us – a watch with such delicate a movement is not to be used for swimming or climbing a mountain – it nevertheless makes for an interesting and more unique aesthetic. The 18-carat pink gold case is 44 millimeters wide and 15.70 thick – it is big, but nothing outrageous when compared to the average size of other Royal Oak Offshore models. Where there is a more noticeable difference, however, is water resistance: a mere 20 meters is noted. Now, while we have said that the movement is extremely delicate and how that prevents the watch to be used in any rocky situation, a rating of 2 bars really is, nevertheless, low – but there’s good reason for that. While there presently are numerous ways of waterproofing a crown and the two chronograph pushers, sealing the minute repeater’s slider on the left side of the case as well as the push-piece in the center of the crown is considerably more difficult. Anyhow, the moment one gets up close to the Royal Oak Offshore’s most complicated iteration, the faintest idea of bringing it anywhere near a drop of water disappears. Virtually every mechanical movement that is more complicated than the average time-only caliber will have multiple layers: automatic winding and chronograph mechanisms are almost always located at the bottom (i.e. case-back side) of the movement, with the time-keeping mechanism with the mainspring barrel, going train and escapement being in the center, while the minute repeater and perpetual date segments are predominantly found on the dial side. In the image above, you see the dial side of the movement, with wheels of different ratios, cams, levers, and pinions being crammed extremely closely to each other – with much of the seemingly excess space being there simply to give room for the sliding and rotating actions of these components to happen. Thanks to the “smoked sapphire dial,” a number of components located here are visible through the dial, providing an arguably more beautiful backdrop than just about any solid dial one can think of.

Some of the minute repeater’s parts can be seen below the sapphire dial as well, while its two gongs are seen on the case back side. The gongs have been placed on the same horizontal plane, as opposed to the more usual vertical alignment – this might be important as far as vertical space requirements are concerned, although the volume and audibility of the chiming action is still not excessively loud (given the size of the gongs and tiny hammers, there are some simple physical restrictions which limit the strength of the sound they create).

As far as more ordinary functions go, this beast of a movement runs at 2.75 Hertz or 19,800 beats per hour, matched by 45 hours of power reserve. While traditionally not “required” for a grand complication, the 2885 caliber features automatic winding – yet another space-consuming feature that somehow found its way into the movement. Although I am not generally for or against automatic winding, in this particular instance, I genuinely feel it should have been omitted – perhaps the only legitimate criticism I can think of when it comes to this wonderful caliber. The large, satin finished rotor looks like it has more in common with top-of-the-line architecture than watchmaking – the strong, angular design with the well-balanced curves here and there remind me of a bridge or a fancy new theater, for whatever reason – but should it not meet the buyer’s expectations, Audemars Piguet offers a customization service where the rotor can be uniquely decorated upon the customer’s request. Impressive design aside, I would still prefer a clear and undisturbed view of the chronograph mechanism exposed on the case back. The number of parts, all finished to extremely high standards, speak for themselves – although we have seen some super-low-production independents try and strive for bevelled and polished edges even on the inner edges and spokes of some of the wheels, that is not present here. Nevertheless, the Audemars Piguet Royal Oak Offshore Grande Complication offers what appears to the eye as an endless sea of beautifully finished components: every cam, bridge, slot and other part that one can think of features hand bevelled and polished sides, leaving no rough edges anywhere to be seen – in line with what one would expect from a watch that takes six months to manufacture and costs more than most all run-of-the-mill Ferraris you can buy. On a personal note, the original 1972 Royal Oak 5402 “Jumbo” is my favorite Royal Oak designs, and as far as I am concerned, in many ways, the Offshore – and many of its different versions – have made for a completely new model, a new watch. The Audemars Piguet Royal Oak Offshore Grande Complication, while for obvious reasons incomparable to the sleek and understated looks of the original 5402, reminds me of what I felt looking at the 5402 and, more importantly, it brings the Royal Oak into the 21st century – while remaining completely mechanical, in fact, while offering the pinnacle of what can be achieved with a set of brass wheels and gears. I love the Audemars Piguet Royal Oak Offshore Grande Complication for the simple fact that it meshes rugged, modern aesthetics with not just a selfishly complicated, but beautifully executed movement – even if behind its deceivingly balanced, steroid-infused appearance there lies a delicate machine that will barely stand a splash from the tap. Seeing this watch in the metal and having it on the wrist for a fraction of the time I wish I had it, was a rare and much appreciated opportunity – thanks again to Alex at Marcus for his kind help with making this happen. The price of the Audemars Piguet Royal Oak Offshore Grande Complication is around $740,000. audemarspiguet.com