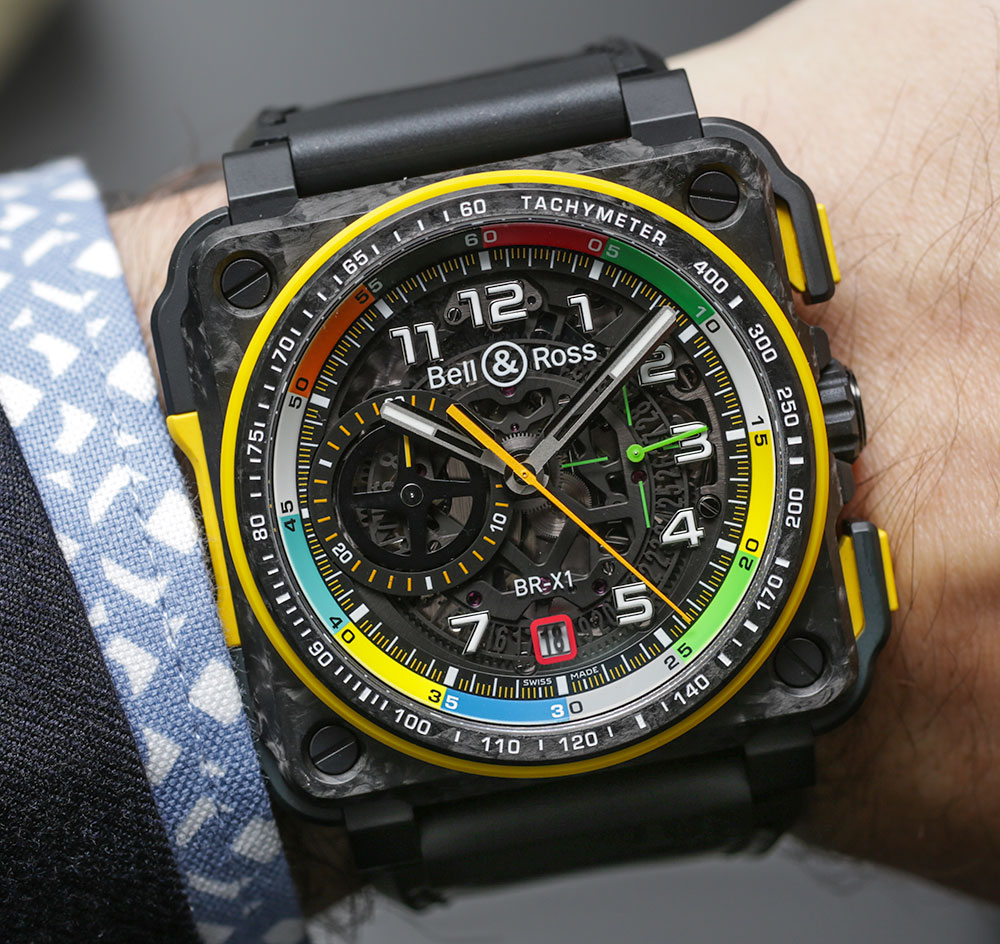 Last month at an event in London, Renault announced the R.S. 17, a beast of a Formula 1 machine set to make its debut at the 2017 Australian Grand Prix later this month. Bell & Ross shortly after announced the new Bell & Ross BR RS17 watches, incorporating several design and material elements found in the recently announced Renault Formula 1 racer. It would be easy for a lot of brands to try and take an aviation watch and totally screw everything up by deciding they want an F1 racing-inspired line (of an iconic design, nonetheless). However, Bell & Ross decided to basically go all out with the design and material choices, and the result actually works and won me over. At 42mm wide, the Bell & Ross BR 03-94 RS17 is done in a ceramic case that appears stealthy and should prove to be quite wearable for most in comparison to some of the larger BR 01 models. Like the Renault R.S. 17 with its molded carbon fiber honeycomb composite chassis, it features a dial made entirely out of carbon fiber – a material choice Bell & Ross claims was also inspired by the racer’s steering wheel. The chronograph layout is colorful but standard and highly legible with a small seconds sub-dial placed at 3 o’clock and a 30-minute counter 9 o’clock. Both sub-dials, along with the date window highlight subtle touches of color against the carbon fiber dial that also carry into the central chronograph seconds hand. The hour and minute hands are faceted and are filled with Super-LumiNova, as are the large Arabic numerals on the dial. The movement in the Bell & Ross BR 03-94 RS17 is the calibre BR-CAL.301. It’s a reliable, ETA-based automatic chronograph movement that Bell & Ross has utilized in previous releases like the BR-03 Desert Type chronograph announced last year. Like the dial, the pushers for the chronograph operation and the crown have also been finished in a similar color scheme that references more of the visual elements you’d find on the F1 racer. There’s no exhibition caseback, but the ceramic gives it a sleek look. You’ll see a photo of the rubber strap above but this watch is also going to come with a black synthetic fabric strap. This Bell & Ross BR 03-94 RS17 watch is pretty demure compared to the larger and even more colorful BR-X1. Bell & Ross decided to throw subtlety to the wind – because if you’re buying an F1-inspired 45mm Bell & Ross watch, then you’re probably not trying to have your wrist candy blend into the crowd… The Bell & Ross BR-X1 RS17 is bigger, at 45mm wide, and is done in the Carbon Forgé case based off the BR-X1 that was introduced in 2015. One piece of carbon fiber, the irregular pattern on the case of forged carbon watches lends a rugged aesthetic to the dynamic and loud colors on the dials of these watches. Again, it’s a pretty… intense-looking watch in that the build and structure of the imposing BR-X1 combined with the vivid colors will make sure that the person wearing it gets a lot of attention. The protruding corners of the Bell & Ross BR-X1 RS17 are done in ceramic and give the watch even more wrist presence as a result of the design architecture here. The skeletonized dial looks as cool as it did when the Bell & Ross BR-X1 was released but it’s really hard to actually focus your eyes on the background when you’ve got a ring of colors diverting your attention. The Bell & Ross BR-X1 is done by installing a Dubois Depraz chronograph/date module onto an ETA base which is referred to here as the BR-CAL.313 movement. The module brings the X-shaped skeletonized bridges, gears, date disc, and screws which are all designed to be shown off through the skeletonized dial. Just as interesting here is the strap which is paired with carbon fiber to round out the cohesive aesthetics. Even though car and racing-inspired watches have been done to death, these watches are loud, bold, and attention-grabbing while still looking as sleek, stealthy, and masculine as the iconic Bell & Ross BR watches – the kind of watch that just might pull me into the sport a little more. The Bell & Ross BR 03-94 RS17 will be limited to 500 pieces and is priced at $6,200 while the BR-X1 RS17 will be limited to 250 pieces and be priced at $24,200. bellross.com