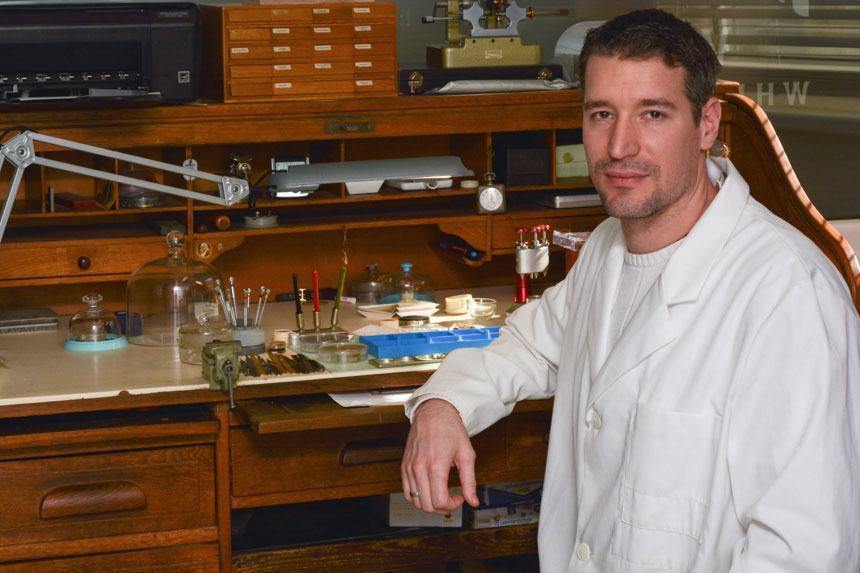 Bexei Watches: Some Of The Finest In The World & Made In Hungary Aaron Becsei of Bexei watches is a fellow Hungarian and the only watchmaker in this tiny Central-European country who builds watches from scratch to finish. That already puts him in a rather unique position, but what makes him and his work really interesting from our point of view is that he actually makes some of the finest high-end watches, crafted to a level of quality that is on par with any large manufacture or famed independent. And if you think my patriotism is taking over my ability to judge in a non-partial way, then I urge you to read on, as we find out how one man can make some of the finest watches all by himself, one at a time, at a pace of less than half a dozen a year.

During the last 12 months, I have paid three visits to Aaron Becsei, and we both put the months that passed between my visits to good use. For one, all this time allowed him to craft a handful of pieces that make up his yearly production and are delivered to some discerning (and very private) collectors. Secondly, I have been trying for a long time to figure out the best possible way to present to you this young man and all that he does. For an article to take one year to write is as absurd as it is for an incredibly gifted craftsman like Aaron to produce less than 10 pieces a year and call it a step up in output… and yet, that is the truth in both cases. What makes his story special is that it tells how one man can dream, draw, engineer, manufacture, assemble, decorate and finish a haute horlogerie timepiece all by himself, a watch that will match any other out there when it comes to quality of execution. I went on to discover how such a seemingly impossible achievement is actually practiced day-after-day in a tiny, yet modern workshop, by a watchmaker who is so much more than what could merely be described as “passionate.” Bear with me and I will tell you all about it. Photography and the quality of the images enjoy an unusually important role in this article as the finer details that separate a high-end watch and what we are looking at today can only be inspected once we take a closer look… But first, to be able to understand and appreciate what we will be shortly discussing, we should first take a few steps back and briefly summarize how watches are produced today.

For one, there are the so called major manufactures (for the sake of comprehensibility we will now exclude the brands using supplied movements). These large companies have a great number of different departments, all dedicated to a very limited number of tasks. These include research and development, manufacturing of components (which has many different branches all to itself, depending on the piece in question), assembly and decoration of the movement parts and testing and finalization of the product. All of these fields have their own dedicated experts, those who are the masters of the field they are working in.

Second, there are the smaller independent manufactures, those which, in general, have a much more limited number of separate departments, as generally a lot more steps in the making of the watch are performed by the same people. This makes sense, as their production is considerably smaller than that of larger companies. Last, but not least, there are a handful of craftsman who are working alone with very limited-to-no-additional-assistance, using a varying number of supplied parts to produce some extremely limited amount of watches each year. It was George Daniels who told in detail how one man could virtually craft a mechanical watch from concept to completion in his fantastic book titled Watchmaking (reviewed here). Its 400 some pages beautifully illustrate how incredibly demanding of a task it is for one man to not only learn, but master, the dozens of different crafts required to make a watch all by himself. The Bexei Tourbillon No.2 clock with tourbillon and perpetual calendar, fully designed and crafted by Aaron Becsei.

With that in mind, what can we expect from a craftsman with no apprentices, save for his lovely wife who helps him with the running of their firm, Bexei watches? Aaron is the youngest in a three-generation watchmaker family and so he had been exposed to finer mechanical clocks and watches at an early age, while he was helping out his father and grandfather, who both were restorers. Sadly, there is virtually no watchmaking practiced in Hungary as, in the literal sense of the word, no related manufacturing has been performed here for the better part of a century now.

This had not discouraged Aaron. He remained motivated to not only repair, but manufacture timepieces. In order to add to the experience that he gained working with his father, he decided to learn CAD/CAM design, graduating with honors from the Chamber of Engineering in Budapest. Now, with the experience he gained through restoring fine watches and clocks, and the knowledge allowing him to craft components of his own designs using some more modern methods, he set out to realize his plans. The Miniature Zappler clock, the smallest of its kind, being just about the size of a coin.

Needless to say, when you establish a brand and strive to be able to sell (at a meager sum) what you are making, there is no room for fiddling around. In 2003, he made his first clock, followed shortly thereafter by the smallest pendulum clock in the world. The Miniature double-pendule zappler (as seen above), is a piece fully of his own design and execution, and is a clock the size of a coin. As he says, after finishing this truly microscopic piece “he found his courage” and was ready to try himself at even more challenging tasks.

Nearly two years later, he finished the Tourbillon No.1 table clock with a calendar, moon phase, wind up indicator, thermometer and world time indications paired with a duplex tourbillon escapement. It was then succeeded by another tourbillon clock, albeit now with a full perpetual calendar, again, developed and crafted by him. The most interesting part from our perspective though, are not clocks but watches.While his clocks certainly proved his engineering abilities, from now on we will dedicate our attention solely to his wristwatches and how they are made. On the way to our first meeting, I had a number of questions that I recall I was eager to find out the answers to. One of the more intriguing ones concerned his yearly production, something I really could not make an educated guess on–I just had no idea, other than assuming that it was very limited. I could invite you to make your guesses but I will just come out with it as it is: in an average year, Aaron makes 5 watches. Not fifty, or five hundred or a thousand, but five.

Along with his triple-axis tourbillon called Primus (which we will be looking at more closely in a dedicated article later, and a piece which takes a year to produce), he makes two considerably more “simple” watches called Dignitas Pure and Dignitas Power Reserve. Both are three-hand watches with the difference being the power reserve indication that is present on the latter. All watches in all instances are made to order and are modified to suit the requirements of the customer. These watches take between 3-4 months to finish (beyond the waiting list, that is), with minimal overlapping in the production of each piece.