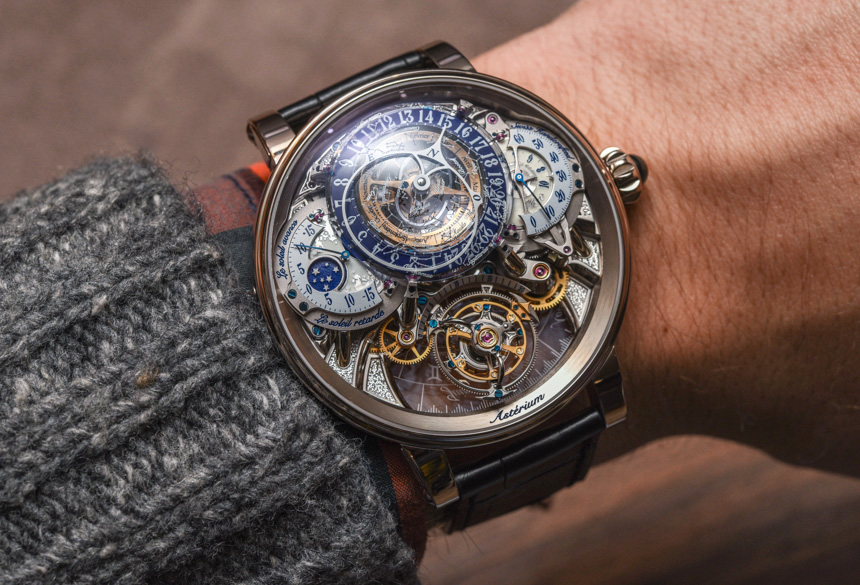 Bovet is a brand that I feel has been overlooked by many and does not receive the recognition that it deserves. Admittedly, their designs can be divisive, but it is hard to deny the technical prowess behind them. At SIHH 2017 earlier this year, Bovet released yet another super-complicated piece called the Bovet Récital 20 Astérium. Though the watch might look complex, its complexity actually hides very practical complications. The Bovet Récital 20 Astérium is available in red gold, white gold, and platinum. The case is large, measuring 46mm across and 18.3mm in height. It is a big watch and one that has lots of wrist presence, but what’s really interesting about the case is that it is wedge-shaped. It is thicker at 12 o’clock and tapers off at 6 o’clock. The reason for this is to accommodate the movement, which has a terraced architecture, a trait that you seldom see in watches. The expansive sapphire crystal is also heavily domed to provide room for the unique movement architecture. During first impressions, the Récital 20 Astérium looks imposing and complicated. The dial is busy and there are layers upon layers of details, indicators, and displays. But it is actually quite easy to read and sensibly laid out once you know what is what. On the dial side at 12 o’clock, you have a large domed piece of transparent quartz that displays the constellations. The watch can be customized to show constellations in the northern or southern hemisphere, and the constellations are laser engraved and then filled with Super-LumiNova to aid legibility at night. Underneath, there is a disk on which the hours are printed. Finally, you have a large hour hand in white that is specially shaped to perform three functions: indicate the time, point north, and display the visible portion of the night sky. Peer closer still and you will find a month disc that moves the constellation display as the year passes, showing how the position of the constellation is affected by the months in a year. Flanking the hours and constellation display are more indicators. To the right, you have a retrograde minutes display and a very discreet power reserve indicator. To the left, you have the equation of time indicator and the moon phase display. At 6 o’clock, there is Bovet’s signature double face tourbillon, which uses an elaborate construction consisting of two levels of bridges and pillars to create the illusion of the tourbillon floating in mid-air. The end result is quite stunning. The tourbillon makes a revolution every minute and there is a marker right above the tourbillon cage that allows owners to read the seconds at 20-second intervals. If you thought the Bovet Récital 20 Astérium was impressive on the dial side, wait till you see the back of it. The back of the watch features what Bovet calls an annual calendar but it actually follows the sidereal year. What it really does is track the length of time it takes for the Earth to complete a single revolution when measured against fixed stars. Therefore, the single central hand takes 365.25 days to complete a revolution on the back of the watch. And, as it travels, it points to the season, solstice, equinox, zodiac, and month indications that are marked on the expansive sapphire crystal. Look closer through the sapphire crystal and you can see the highly decorated Caliber 17DM02-SKY. It features a single mainspring but because the movement is so efficient and also because the balance beats at a leisurely 2.5Hz, the Bovet Récital 20 Astérium has a long power reserve of 10 days or 720 hours. It goes without saying that the Caliber 17DM02-SKY is meticulously finished. A unique type of finishing that they use is a form of engraving called bris de verre, which loosely translates to “broken glass.” This gives surfaces a textured shimmering look that closely resembles the tremblage engraving found on A. Lange & Söhne’s ‘Handwerkskunst’ pieces. Elsewhere, we have the usual assortment of haute horology finishing including hand-beveled bridges and plates, polished screw heads, polished jewel countersinks, black polish, mirror polish, and satin finishes. Coupled with the unique terraced architecture of the movement, the Caliber 17DM02-SKY is one of the most visually captivating movements I have ever seen.