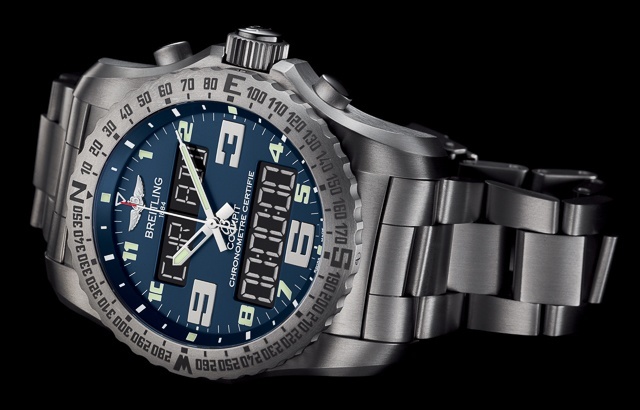 In-house quartz watch movements at Breitling? Pretty much, “yes,” with the new Breitling Cockpit B50 timepiece in their Professional collection of watches. OK, so let’s start by talking about the whole “in-house quartz” part of the conversation, as it is perhaps the most interesting, outside of the design of the watch. For years, Breitling has been sourcing high-end thermocompensated quartz movements from Swiss ETA. These come in a few varieties, but are contained in all the quartz movement-based Breitling watches, from their totally analog dials (three-handers and chronographs) to their various ana-digi (analog-digital) watches that have both traditional hands as well as two LCD screens. Breitling now pushes forward to create their own evolved movements based on the foundation that ETA laid.

None of this means that Breilting is going to stop using ETA thermocompensated quartz movements in some of their watches (such as the famed Aerospace), but rather that they are adding a new flavor for those seeing something a bit more… ultimate. As I have said and will keep saying, I see more and more room for high-end quartz to be something collectors are interested in as well as mechanical watches. I promise you that the movement inside Breitling Cockpit B50 costs more than most basic mechanical movements Breitling uses in their standard collection of watches. In addition to having both in-house made and sourced mechanical movements, now Breitling will have similar options with their quartz movement based watches. Breitling refers to the movement in the Breitling Cockpit B50 as “in-house made.” More correctly there are some parts produced in-house, and some that are sourced from specialized suppliers. Breitling is correct to say that the movements are “exclusive” to them, given that they don’t make everything. Oh, and in addition to the watch being called the Breitling Cockpit B50, the movement is the caliber B50. Breitling appends its “SuperQuartz” term to the movement, which means that it is thermocompensated. What is that? In addition to being eligible for the stringent COSC Chronometer certification for quartz watches, it uses a system that is able to adjust for how temperature can effect the accuracy of the quartz regulator, giving overall accuracy to the movement of just a few seconds per year. Having said that, Breitling has not given us how long the battery life is. I would expect to get at least a year on normal usage, but it is nice that you can “top off the power” when you need. One of the reasons this might be necessary is that the B50 movement likely uses a lot more power than ETA movements. I believe this to be the case because it has a very strong backlight. Not only that, but the B50 movement is designed to be able and activate the backlight when you turn your watch toward your face as a 45 degree angle. Yes, many better Casio watches have been offering this for a long time, but at least you can now have this feature in a very high-end timepiece. Just one more thing Breitling can say it has in common with the Apple Watch.

In addition to the crown that acts as pusher, the B50 movement has two other pushers that act as chronograph pushers and perhaps do other things as well. Breitling seems to have added a few new features to the watch that did not exist in SuperQuartz movements designed by ETA. Standard features include the time, perpetual calendar, 1/100 of a second chronograph, alarms, battery charge indicator, countdown timer, electronic tachometer, and a second timezone. New features that I believe do not exist in some of their other similar watches that are now available in the B50 movement are a special countdown or count-up mission elapsed time (MET) indicator, and a flight time chronograph. While this dial design is legible and has a lot going for it, I am not the biggest fan of the hands and the 12, 3, 6, and 9 o’clock numerals are a bit glossy for my taste. For a “Professional” watch, Breitling seems to be trying to add a bit too much bling. At the least, I prefer the solid, longer, more matte-finished hands seen on some of the older models.