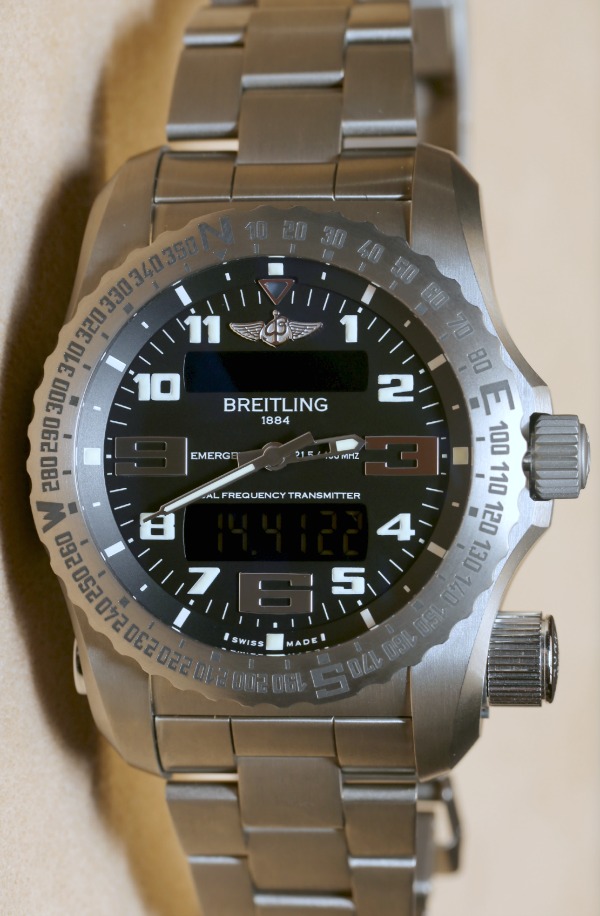 In addition to being a luxury Swiss watch maker, Breitling retains its role as a supplier of professional-use timepieces to military personnel and demanding active people all over the world. For 2013, Breitling has released an updated and improved version of their famous Emergency watch designed to be used in situations where you might need to be rescued. The Emergency II represents a unique evolution in miniaturizing emergency beacon frequency technology in what is otherwise a stately-sized timepiece. The original Breitling Emergency watch is a distinctive-looking piece and was released in the mid- to late- 1990s. It contained a capsule filled with a wiry antenna that when deployed automatically transmitted a signal on the 121.5 MHz emergency frequency channel. It had a range of about 100 miles, and was to be used exclusively in legitimate emergency rescue situations as the 121.5 frequency is actively monitored by search and rescue authorities.

In about 2009, I understand that most marine and air services stopped using the 121.5 MHz frequency in favor of the 406.040 MHz frequency channel for emergency beacon signals. The reason is obvious, given that the 121.5 MHz frequency’s range is limited. The 406.040 MHz signal is also monitored by low orbit satellites that are part of the Cospas-Sarsat system. This effectively gives the Emergency II watch a much more impressive range than the original Emergency given that the wearer is no longer limited to transmitting a signal with a 100 mile range. On land, the 121.5 MHz frequency is still monitored because there are very few places that are 100 miles out of range of an emergency beacon monitoring station. In air or at sea, that is a different story. Therefore, the Emergency II watch automatically transmits both signals when the beacon system is activated. The Emergency II is the very first watch where dual frequency emergency beacon technology has been implemented into a timepiece. How it works is rather simple. The Emergency II watch is basically part timepiece, and part radio transmitter. The transmitter has a pair of antennae that sit in a pair of capsules which are accessible on the sides of the watch. Unscrewing the caps and extending the wire-style antenna automatically activates the beacon system, which alternates between sending out signals to the 121.5 MHz and 406.040 MHz bands periodically for about 24 hours. The system uses a rechargeable battery, which should be charged every two months. I am glad that Breitling was able to manage all this in the space of a wristwatch, as the 406.040 MHz signal requires much more power than the 121.5 MHz frequency to transmit.

Breitling supplies a smart charging base with each Emergency II watch. The charging base not only charges the beacon battery, but also does a systems check to ensure that the system is in proper working order. The watch movement itself operates on a separate battery. This new system is significantly more robust than the one in the older Emergency watch. In addition to the dual frequency capabilities, the Breitling Emergency II watch is finally an emergency beacon system that allows for search and rescue anywhere in the world. The new technology of the Emergency II watch is rather fantastic, and I am pleased to hear that Breitling was able to offer the same, no-brainer operation as the original. As a watch, the Emergency II looks like the big brother of the original Emergency, quite literally. The Emergency II is a rather large timepiece, even by large watch standards. It is wearable, but at 51mm wide, it is probably going to be the largest (and quite thick) watch in your collection. Produced entirely in titanium, the Emergency II isn’t that heavy though – so at least weight is not an issue.

From the markings on the case back to the overall personality of the watch, the Emergency II doesn’t feel like a gimmicky high-end sport watch but rather a serious tool for active professionals who find themselves in high-risk situations. The entire point of a product like the Emergency II is to be reliable, and Breitling has done everything in their power to ensure that the Emergency II watch is just that. Inside the watch is a Swiss Breitling Caliber 76 SuperQuartz COSC Chronometer certified multifunction quartz movement. These fantastic thermocompensated quartz movements offer a rich variety of functions such as a 1/100th of a second chronograph, countdown timer, world time function, alarm, and full calendar. This is done via the analog hands for the time and the two negative display LCD screens. All of the functions are operated via the crown. Thermocompensated quartz movements such as the SuperQuartz are accurate to about plus or minus 10 seconds a year (which is very good).

Water resistant to 50 meters, the Emergency II watch isn’t meant for any serious time underwater. The dial comes in three colors, being black, yellow, and orange. Over the dial is a sapphire crystal and attached to the case is either a titanium Professional bracelet or a Breitling Diver Pro III rubber strap.

While wearability is an issue given the large 51mm case size, that likely won’t deter professionals who have been relying on Breitling Emergency watches in the event they are caught in emergency situations and they need a beacon in order to be recused. I am not sure if the Emergency II will totally replace the original Emergency, but I suspect that it might. As the technology in the Emergency II timepiece is still new, the price is quite high at launch, being around $15,000. breitling.com