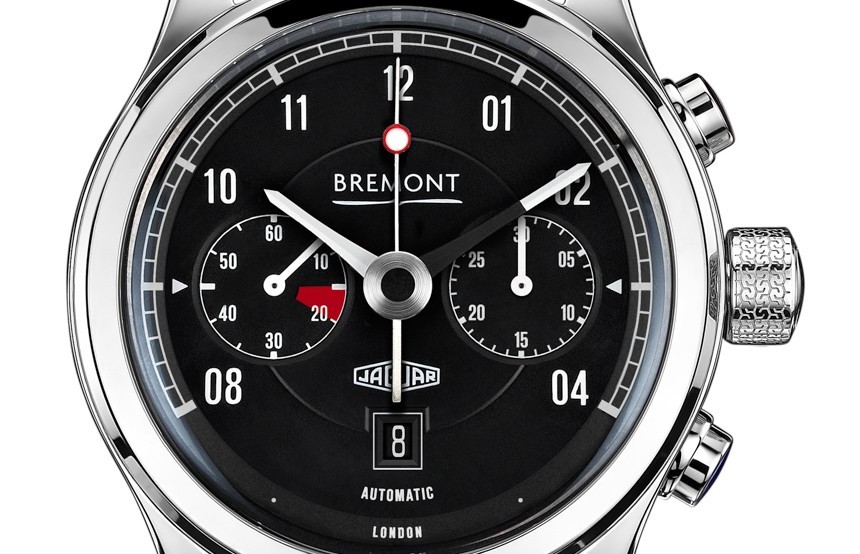 What happened half-a-year ago was that Bremont announced a limited edition of six time-only watches, inspired by the famous Jaguar E-Type race car – so much so that, in fact, the watch was designed to be sold to the future owners of the six $1.6 million re-production E-Types that Jaguar created last year. The dial design was largely inspired by the tachometer (or rev-counter) of the E-Type, as the watch featured similar fonts and red-zone between 3 and 4 o’clock. The reason I’m telling you all this is that, while those six pieces in white gold were expected to be priced somewhere around $40,000 each, with the Bremont Jaguar MKI and Bremont Jaguar MKII in steel, we are looking at watches that look extremely similar and yet are priced at a fraction (a sixth or fourth of that price, depending on the model) of the limited edition. Let’s now see what we have here, exactly. The Bremont Jaguar MKI watch is the three-hand version, driven by the same partially in-house made BWC/01 automatic caliber that runs on a La Joux-Perret base and that we saw in the Wright Flyer watch and in the E-Type limited edition. What is new is that the Bremont Jaguar MKI, beyond central hours and minutes and the seconds-subdial at 9, actually offers the added functionality of the date at 6. Despite that small change, the movement looks exactly the same as it did in the limited edition, which is good news, as the large sapphire opening does provide a nice view of the movement and its cool, vintage steering wheel-inspired winding rotor. The three-hand movement runs at 4 Hertz and has “50+ hours” of power reserve. The Bremont Jaguar MKII sports a chronograph, courtesy of the BE-50AE movement, which is based on the ETA 7750. Unlike the three-hand version, the chronograph is COSC certified. Displaying the running seconds at 9, the 30-minute counter for the chronograph at 3, and the date at 6, the Bremont Jaguar MKII offers a very clean, legible and, dare I say, handsome dial. The dial has good contrast between the properly sized hands and the Jag-dashboard-inspired numerals printed between 8 and 4. What, from the images, appears to be a large cap securing the three central hands is an interesting design element and one that I look forward to seeing “in the metal.”

A small but intelligent design choice is that, while the minute track is indeed missing between 4 and 8, two subtle but visible white dots have been added to the spot where the two missing indices should be, giving useful points of reference when trying to read the time in the lower half of the dial. One small gripe that I do have with the chronograph does not concern the front but the back, as although the fancy perforated rotor remains, the decorated cap from its center is missing – which is a bit of a shame, as it did complete the case-back view. The case for both versions is 43 millimeter wide and 16 mm thick, in polished steel, with a DLC-treated “case barrel” that we are used to seeing on the sides of Bremont cases. Beyond all the Jaguar-inspired design elements – and the vintage Jaguar logo on the dial – another subtle detail that takes the automotive theme a step further is the tyre-tread pattern etched into the substantially sized crown. We have said this before, and it is properly demonstrated here again: such minor, bespoke components can add a lot to a thematic design and are in fact something that one rightfully expects – but scarcely experiences – at this price point.