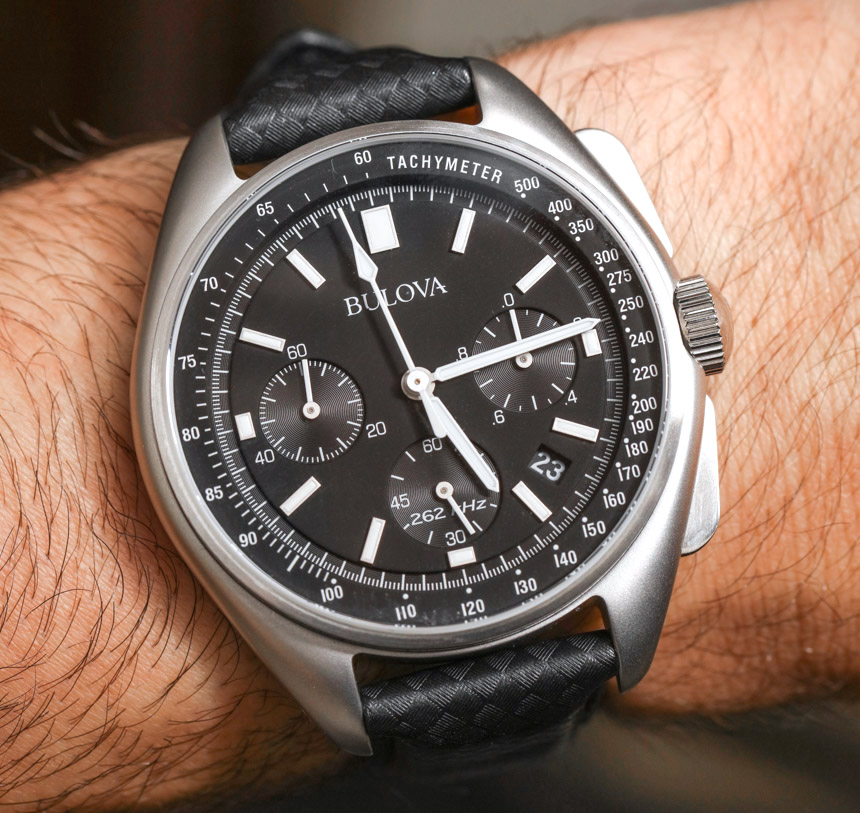 In 2015, Bulova made headlines when an obscure watch they produced for the NASA Apollo missions, and which was worn by astronaut Dave Scott on the moon, sold at auction for over $1.6 million. During the Apollo missions, Bulova was the American competitor vying with Swiss Omega to have their timepieces be the official ones used during the moon missions. Omega ultimately won, and the story of Bulova’s moon watches for the most part has been obscured in horological history.

In late 2015, for a 2016 release, Bulova announced that they would be releasing a “Special Edition” Bulova Moon Watch that aBlogtoWatch went hands-on with here. I’d like to now follow that up with a full review of the Bulova Moon Watch, which currently has the official name of “Bulova Special Edition Moon Chronograph Watch,” due to what I believe are some legal intellectual property issues with Omega given their use of “Moonwatch” for their classic Speedmaster Professional model.

The Bulova Moon Watch and the Omega Speedmaster Moon Watch aren’t exactly competitors give their vastly different prices, but thematically and visually they are in the same ballpark. My simple summation of this timepiece is that the Bulova Special Edition Moon Chronograph watch is an excellent budget alternative to the Omega Speedmaster, and should be a product that anyone looking for a good, classic-looking circa $600 tool watch should put on their shortlist of choices – which includes the Bulova Special Edition Moon Chronograph reference 96B251 on a strap and the 96B258 on a steel bracelet. Bulova is owned by Japan’s Citizen Group, and while their movements aren’t shared in Citizen watches, you get the assurance that the “high-performance” quartz movement inside of the Bulova Special Edition Moon Chronograph watch is of a high quality. Look on the dial of the watch and you’ll see a “262 kHz” designation label in the subsidiary seconds dial. This should be the first hint to those unfamiliar with this line of Bulova timepieces that there is something special inside of the watch. Bulova has over the last few years changed how it refers to their interesting quartz movements, whose performance is better than standard quartz movements out there. This began with the “Precisionist” name, later evolved into “UHF” (“ultra high frequency”), and which is now just “High Performance Quartz.” The Moon Chronograph watch uses the “UHF” designation, with the label “Ultra High Frequency” on the rear of the watch next to a small image of a three-pronged quartz resonator – in case you were wondering what that was. The 262kHz (262,144Hz) of Bulova’s UHF movements is thus much more than circa 33kHz of standard quartz movements. That means several times the accuracy. The result is a movement which for the most part is accurate to within several seconds per year, as opposed to several seconds per month for standard quartz, and several seconds per day for mechanical watches. Bulova doesn’t produce the only quartz movements with this type of accuracy, but these are among the most affordable. I like this feature in the watch because it goes along the theme of a reliable tool watch meant for precision activity (like being an astronaut), and this type of accuracy makes the product all that much more desirable. The High Performance Quartz movement inside of the Bulova Moon Chronograph watch features the time, 12-hour chronograph, and the date. The chronograph is accurate to 1/10th of a second. The dial design is no-nonsense but elegant, with a high contrast between the matte black dial and the white lume-coated hands and hour markers. Over the dial is a flat AR-coated sapphire crystal, which is a nice feature in a watch at this price. In vintage style, the crystal is raised up a bit and not flush with the bezel. Around the dial is a raised rehaut ring with a tachymeter scale used to measure speed when distance reference points are viewable. You will more than likely never use the tachymeter scale, and they continue to exist as a neat-looking vestige of the past. The raised tachymeter scale ring, as well as the applied hour markers and the recessed seconds scale on the dial create a very welcome sense of depth. Flat watch dials look cheap, and here in the Bulova Special Edition Moon Chronograph watch that thankfully isn’t a problem. In addition to a welcome three-dimensional view of the face, the hands and hour markers are sized properly and very proportionate. This gives the overall dial design both a functional and beautiful look, in my opinion. Note that Bulova correctly used a black date disc, so that the date indicator window is not white, and thus doesn’t create a harsh contrast that watch lovers tend to criticize. As I said a few times, the attention to detail in the watch is impressive, and it easily stands out from many other watches on the market at this price point. At 45mm wide and 13.5mm thick (water resistant to 50 meters), the Bulova Moon Chronograph watch is on the larger side, and that is likely to be people’s main point of concern in getting one. The size doesn’t bother me as the lugs are stubby and the watch wears very comfortably. However, if you are concerned about the size you should try one on first. The steel case is very nicely rendered, in my opinion, especially because it isn’t boring-looking.