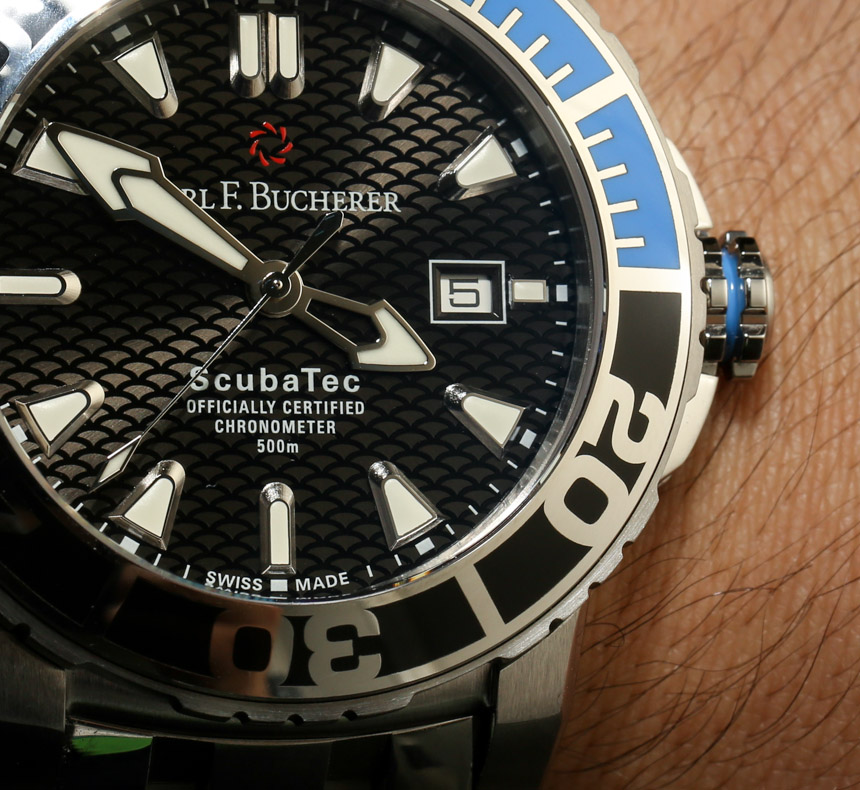 High-end watch brand Carl F. Bucherer is of course part of the larger Bucherer family that includes the major Swiss watch retailer. Like many modern brands trying to appeal to a diverse set of potential customers, they might come out with a new classic tourbillon and diver in the same year. In fact that is exactly what they have done. We recently reported on Carl F. Bucherer’s first tourbillon with a hands-on look at the new Manero Tourbillon here. Now for a diver with the Patravi ScubaTec.

The details of the Patravi ScubaTec will show you that it isn’t trying to be the next best thing in dive watch technology nor an attempt to include some new complication in a dive watch that no one has needed until now, and still won’t need tomorrow. The way we see the Patravi ScubaTec is a sort of high-end interpretation of the highly popular “indy diver” watch. That means Carl F. Bucherer seems to be taking a lot of what people like and are adding their own spin on it in creating a beefy, modern looking sport watch that has legit diving potential and is something you can easily beat up a bit. At 44.6mm wide with strong lugs, this is a large watch, though at just 13.45mm thick it isn’t terribly tall for a diver. The steel case is classic in its composure but designed with a lot of straight lines and angles that point to a more contemporary creation. This is not just another retro diver. That is getting to be a crowded market. It is really about having luxury detailing on what is essentially a fun sport watch. I do feel as though the debut version is a bit limited style-wise as they could have come out with more color options, but if you love blue and black you’ll love the ScubaTec.

Speaking of the name, “ScubaTec” is clearly an extension of “TravelTec,” which is another (more complicated) piece in the Patravi collection. The ScubaTec is more simple of course, but that is sort of the point. In fact, the entire idea of a dive watch is to be durable, easy to read, and dependable. The Patravi ScubaTec is all of this, but so are a lot of other watches that are a lot less expensive. Aside from some of the complex design elements such as the case and parts of the dial, pretty much all the functional elements of a watch like this are available on a $1,000 watch. So while this is a handsome diver, it sort of feels as though Carl F. Bucherer should have upped the ante a bit. That perhaps could have been in the form of a unique feature such as including their in-house A1000 automatic movement.