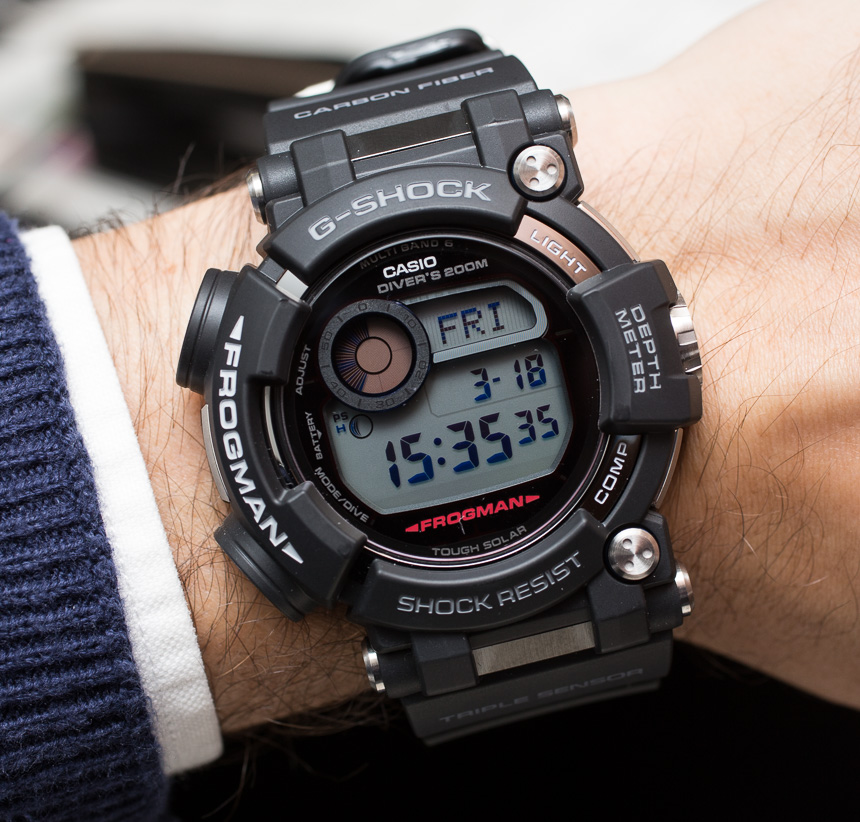 For Baselworld 2016, Casio has introduced one of the most impressively cool G-Shock watches in a while with the brand new model GWF-D1000 Frogman diver. Casio’s premier serious diving G-Shock watch has retained everything we love about a Casio G-Shock and has grown into the more serious diving computer we believe Casio has produced. Casio has finally developed a neat-looking tool that modern divers can use for more than basic timing information, as well as a timepiece that you can theoretically wear on a daily basis. It isn’t cheap, but this is one of the best G-Shock watches around that isn’t a novelty watch and is the exact kind of device that helped make G-Shock watches as popular as they are today. According to Casio, the original G-Shock Frogman was introduced in 1993 and like many of their core collections has evolved over time as the company added more and more features to its G-Shock rescue diver. Many of those advancements were about making the Casio G-Shock Frogman a better watch such as making it more durable or solar-powered. For 2016, The Casio G-Shock Frogman GWF-D1000 family (which includes the reference GWF-D1000-1 and GWF-D1000B-1 (blue color accents) has been upgraded to incorporate the features of a relatively robust dive computer – while still retaining all the same features and conveniences of a Casio G-Shock.

These convenience features include Casio’s full swathe of functions such as the “Tough Solar” light-powered movement, atomic clock radio signal accuracy control system, and intense case durability. Most of the inner case is actually DLC-coated steel and the Frogman is further water resistant to 200 meters. Casio also added three sensors which measure the temperature (in 0.1 centigrade increments), depth gauge, and compass. Casio really improved on the compass system and optimized it for diving use. The compass now comes with an automatic horizontal compensation system which allows the compass to be useful with a tilt of up to 80 degrees. This is very useful while swimming and needing to follow a particular directional bearing and not having to always adjust your arm to get a proper compass reading. This is really one of the major new innovations, and it is one that in various forms has and will make its way to other 2016 and future Casio compass watches. As a dive computer, the Casio G-Shock Frogman GWF-D1000 logs your dive time, tracking your depth, recording the water temperature, and logging the data for up to 20 dives. That means the Casio G-Shock Frogman GWF-D1000 acts as a more or less complete dive computer. What isn’t clear is whether or not the system suggests ascent times with decompression stops. However, the system does have an alarm if it thinks you are ascending too quickly. Yes, there are other dedicated dive computers with more functions to help professional and recreational divers with how long to stay down and when to come up, as well as help track remaining oxygen, but Casio designed the Casio G-Shock Frogman GWF-D1000 for serious use that is much closer to profession dive computers than ever before. I’d consider it to be a pro-level back-up diving computer for seasoned divers who know what they are doing, as well as a reliable backup diving computer for recreational divers. With that said there are a number of features that dedicated diving computers have which the Frogman doesn’t – so all divers should be aware of and understand their equipment before using them in a diving scenario. Casio also includes a range of time and calendar-related information such as moon phase indicator on the dial as well as a tide chart. You also get all the standard Casio G-Shock functions such as the stopwatch, countdown timer, alarms, etc… It really feels like the best of G-Shock suddenly became an even more serious tool watch for pros and nerds alike – though it would be hard to justify getting a Casio G-Shock Frogman GWF-D1000 if you never intended on taking it into the water.

On paper, this all sounds great but what does the 2016 Casio G-Shock Frogman GWF-D1000 feel like on the wrist? The first thing you notice when you hold the watch is how much more sturdy and solid it feels as compared to most less-expensive or less-engineered Casio G-Shock timepieces. The entire inner part of the case is black DLC-coated steel, which has the resin “armor” of all G-Shock timepieces. The screen is totally new as well, offering a better resolution and more crisp display. This isn’t the G-Shock watch you grew up with. Over the dial of the 53.3mm-wide (and 18mm-thick) Frogman case is a sapphire crystal. This isn’t the first time Casio has used a sapphire crystal on a G-Shock case, but you can imagine that such components are rare in the G-Shock collection. Style-wise, the Casio G-Shock Frogman GWF-D1000 isn’t trying to win any beauty contests, but succeeds in being a distinctly modern and very “G-Shock” tool watch that inspires the same amount of “nerd want” as any other high-performance tool watch. Enthusiasts will appreciate some of the more minor updates to the design of this newest generation Frogman, as well as the updated Frogman logo. The swimming frog character now wears a helmet and carries a flashlight. The implication is that the Frogman is is more durable and functional then ever. Nothing about the Casio G-Shock Frogman GWF-D1000 feels cheap, and the overall fit and finish are quite different than the G-Shock family’s more entry-level models.