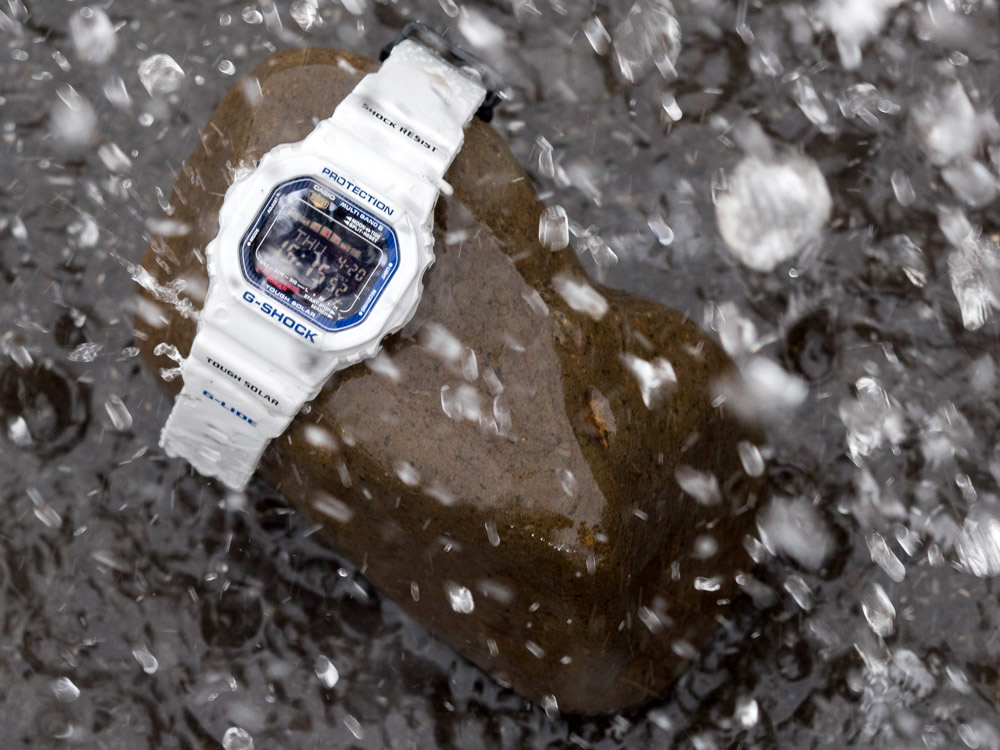 When I call this the “Kikuo Ibe” watch, I don’t mean to imply that this is a special limited edition or any of that nonsense. This Casio G-Shock GWX5600C-7 is your bog-standard, non-limited G-Shock that is very close to what happens to be daily worn by Kikuo Ibe, the creator of this rugged, go-anywhere-survive-anything watch. The importance of the fact that it’s also owned by yours truly pales in comparison; but it provides us with the opportunity of a full review… so here goes! First, a disclaimer: I am hardly ever at all concerned by “who wears what watch” and ridiculous “style alerts,” but when the actual creator, designer, lead engineer of an important brand or product (in any industry) picks one specific model pretty much exclusively, now that I find noteworthy. Mr. Ibe wears an older G-5600A-7 which is not an exact match to the one reviewed here, but the two are of the same basic design that also dates back to that of the original. I feel safe in saying that even if you have never owned one, you still have a pretty accurate idea on what the G-Shock is. For the longest time, Casio’s shock-resistant G-Shock watches have been synonymous with tough, dependable, affordable and, yes, sometimes a bit over-the-top-looking watches. A bit later, I’ll talk about how such a watch can nevertheless make an extremely versatile everyday wear, but now a bit of history: G-Shock was born from the developer Mr. Ibe’s dream of “creating a watch that never breaks.” The story goes that he was wearing a regular, but personally highly valued watch when he accidentally banged that watch into a passerby’s watch as they walked past each other on the street. Long story short, Ibe’s watch fell to the ground and broke, and from that moment he began his pursuit to create a wristwatch that could survive knocks and bumps… and a whole lot more. G-Shock inventor Kikuo Ibe wearing his white 5600-series – one of only two G-Shocks he said he owns.

Over the course of two years, Ibe and his team of eight produced 200 handmade samples that were created and tested to destruction until finally, in 1983, the first and now iconic G-Shock hit the streets of Japan and began to establish itself as “the toughest watch of all time.” Each G-Shock today encompasses 7 principles: electric shock resistance, “gravity resistance,” low-temperature resistance, vibration resistance, water resistance, shock resistance, and toughness. G-Shock durability development in the Casio manufacture involves catapulting watches into a block of concrete.

If you want to see how G-Shock’s are made and tested today as you have never seen before, check out Ariel’s quite incredible G-Shock manufacture visit article here. For more from Kikuo Ibe himself, check out this short video interview here, and for some more excellent G-Shock reading, (if you haven’t already) check out Ariel’s recent report from the afternoon he spent in Tokyo with G-Shock designer Mr. Ryusuke Moriai. About This G-Shock: Functions

This $150 G-Shock GWX5600C-7 is actually one of the latest, newest additions to the G-LIDE tide graph series, you know, the one packing some 100 pre-set tide sites and user-site setting capability… However, I am no diver or surfer or boat captain, so other than enjoying this function as a visual element, I am yet to figure out how it can enhance my everyday life. Speaking of less obscure and more practical functions of the GWX5600C, we’ll have to mention the Tough Solar rechargeable battery that runs for about 10 months on full charge without further exposure to light – in the unlikely event that you put it in a drawer and don’t wear it often. This recharging capability saves you the trouble of having the battery replaced every two or so years and keeps your mind at ease when using some of the more power-thirsty functions.

Even at $150, your money gets you Casio G-Shock’s 3222 Module (technically the 3222 “movement”) which packs Multi-Band Atomic Timekeeping, an awesome functionality that allows the watch to quickly, in the matter of a few seconds, receive time calibration radio signals in the US, UK, Germany (and in most other European countries I suspect), Japan, and China where these radio signals are transmitted. The module automatically “asks” for these signals up to 6 times per day (up to 5 times per day in China) and there is also a manual receive function. The module without radio syncing offers +/- 15 seconds per month accuracy. The G-Shock GWX5600C-7 is packed with Casio innovations and technologies to prevent it from suffering direct shock; this includes internal components protected with urethane and suspended timekeeping modules inside the watch structure. Phew, that was but a mouthful. In everyday use, all this functionality comes at a price though: a clunky and difficult user interface, and here are the main culprits. The functions you can operate and browse through using three of the four pushers – two on the left and the lower one on the right. While the pushers look nice and small, almost flush with the case, they are rather difficult to use. Although they are easy to find both visually (their black coating makes them stand out against the white case) and by touch, the pushers for some reason travel too long, meaning that you always have to push them deeper than the cutouts would allow you to. The end result is that you have to use your nails to press on the slippery and small pushers, which is annoying. It also makes them difficult to operate when the watch is on your wrist and you’re on the move and just need to look something up quickly, start or stop a chronograph, or what have you. All the more annoying is the fact that this is a simple design mistake that would not be an expensive fix to get right from the get-go.