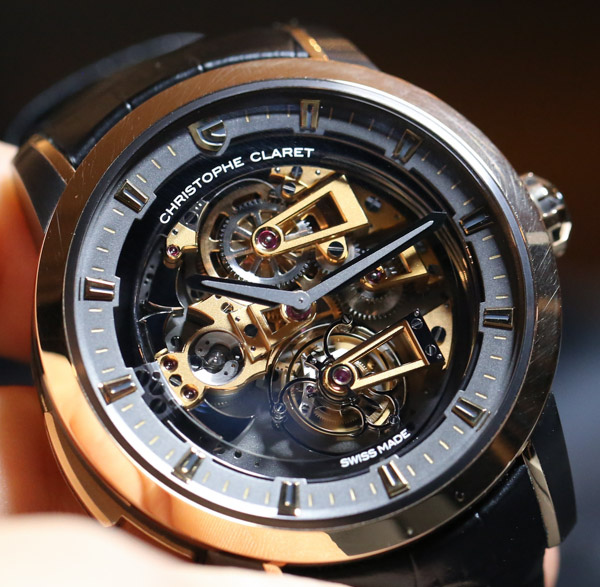 For my money, Christophe Claret is the guy I would hire to run a movement design department of a watch company. In fact, for much of his career in watches, that was what he was doing. What I like about Christophe, and even more so respect, is that he “gets” what mechanical watchmaking really is in today’s world. Some watchmakers present themselves as religious zealots – keeping the faith alive by preserving the honor and tradition of traditional watchmaking. Claret has advanced beyond that. Like a kid, he knows that mechanical watches are toys for the rich – of all ages. And there are different types of mechanical watches for different levels of “rich.”

So what Claret does is take traditional concepts, complications, and principles, and arranges them in contemporary ways. He is really at the forefront of interpreting traditional watchmaking and making it interesting for today’s tastes and expectations. Like a modern day Breguet, his talent is in impressing some of the world’s most elite collectors by producing cool, limited production, high visibility tech toys powered by springs. The Soprano collection of minute repeater tourbillon watches is one of his latest feats. Let’s check it out… Part of me wants to put jam on this watch and eat it. The movement looks that good. Those tall bridges hovering over a deep mass of hand-decorated parts produced with high-tech machines in Claret’s secret lair. About 450 parts in a movement impossible for my non AutoCAD-operated brain to comprehend. The sword-like hands on the dial are edged in synthetic ruby, or onyx, or blue crystal. Its dial (or lack thereof) was designed to play with the light, as inside of it are several layers of sapphire crystal discs. If there was ever a minute repeater suitable for wearing while driving a sleek Ferrari or muscular Lamborghini, this is it.

The Soprano is named as such because it sings. Christophe likes to outdo others, and with his minute repeaters, he frequently does. Minute repeaters after-all, are his specialty. The one in here plays the full Westminster Quarters notes. That is four notes as opposed to the typical two notes of many other minute repeaters. To do this, the watch employs four circular gongs hit by four hammers that are visible on the dial. The tone of the minute repeater in operation is loud and clear – especially on the all-titanium models. Also, Claret developed a silent inertia governor for the minute repeater. Translation: no humming noise while the repeater is in action. You can hear the minute repeater in action in the video above. Titanium is the obvious choice for the 45mm wide (15.32mm thick) case as it is strong and light, but not so dense as to terribly retard the sound of the chimes. Platinum apparently is a terrible choice for minute repeaters. The case is modern looking yet simple. It serves merely as a frame for the movement. Little touches inside of the movement are what matter. On the dial you’ll see a trio of distinctive looking bridges on the calibre TRD98 manually wound movement. Claret calls these “Charles X bridges” as they were inspired by pocket watches from Charles X. On the dial you also have a tourbillon, and above it, a skeletonized view of the mainspring barrel. Skeletonizing mainspring barrels allows you to see the spring inside it and know if the watch needs to be wound (judged by how tight the spring is). The movement has a power reserve of about 72 hours.

Claret developed a technology that helps him produce the right sound from minute repeater watches. When it comes down to it, the shape, material, and method of constructing these little machines is today dictated by computers. Claret has some incredibly sophisticated machinery to build his watches, and is very proud of the modern techniques he uses to build these traditional little items. To be honest, between a watchmaker using historic tools with trial and error, and Claret’s infomatic approach to building proper mechanical watches – I’ll choose the latter. Perhaps there is something about Claret’s distinct love of the “new” that appeals to me as a tech generation type. Slow and steady is certainly not my pace, nor do I fawn over traditional design as though it was the only “true” mantra. Instead, I applaud the construction of quality machines. I love precision, and obsession, and fascination with perfection. Everything Claret does is about mental mastication of how to improve upon and further enhance the work of the dead watchmaking masters. He’s like a spiritual guide of this art form – helping to keep it alive in an era all but ready to forget it.

If my French was better I’d ask Christophe what he would do with his life if he’d never discovered watches. What would he make? Where would he apply his talents? Would he still be someone who creates and builds? Would he be a numbers man or a hands-on man? The funny thing is that when I meet watchmakers of his caliber, I have no answers to these questions. These (mostly men) people are so razor honed to being watchmakers I could not guess where alternative lives would have taken them. Christophe likes to share the story of how his brand was born. When I first met Christophe Claret, he was the guy that made cool complicated watch movements for other brands. Among the last really neat movements he made for third-party clients were things like the Jean Dunand Palace or Tourbillon Orbital. When the financial crisis hit, his list of clients stopped selling watches, which in turn stopped them from paying Claret, and of course put a big damper on future orders. As a necessity to survive, Claret decided to just leap into the brand business and put his name not just on the movements but on the dials.

His original business model was actually quite traditional. The early watch industry was a pairing of one company making movements, and another company making the cases and selling the watches. Only later did you have the same brand produce both the movement and the case – though that is commonplace today. According to Claret, the gamble to start his own eponymous brand paid off. His creations are unique, polarizing, and really what the high-end watch industry should be about. Shock and awe collectors with wild creations to tantalize – resulting in either extreme love or extreme hate. Those are the emotions that move people to spend $300,000 and up on a watch. Christophe Claret will produce very view Soprano watches. There are three versions and each will be limited to just eight pieces. Each of the cases is heavily made from titanium, but is also accented with parts made from either 18k white gold or red gold. The case-fitted straps are hand-stitched alligator with contrast stitching (go for the red if you can pull it off). While not everyone loves Claret’s watches, perhaps preferring something more “designer” or traditional, I have a big soft spot for what he does. People with an appreciation of mechanics and Claret’s own subtle sense of humor will no doubt find stuff like this irresistible. Items like this motivate me as much as status and power to go out and make a fortune (only to blow it on a timepiece). Price is between 468,000 – 476,000 Swiss Francs. christopheclaret.com