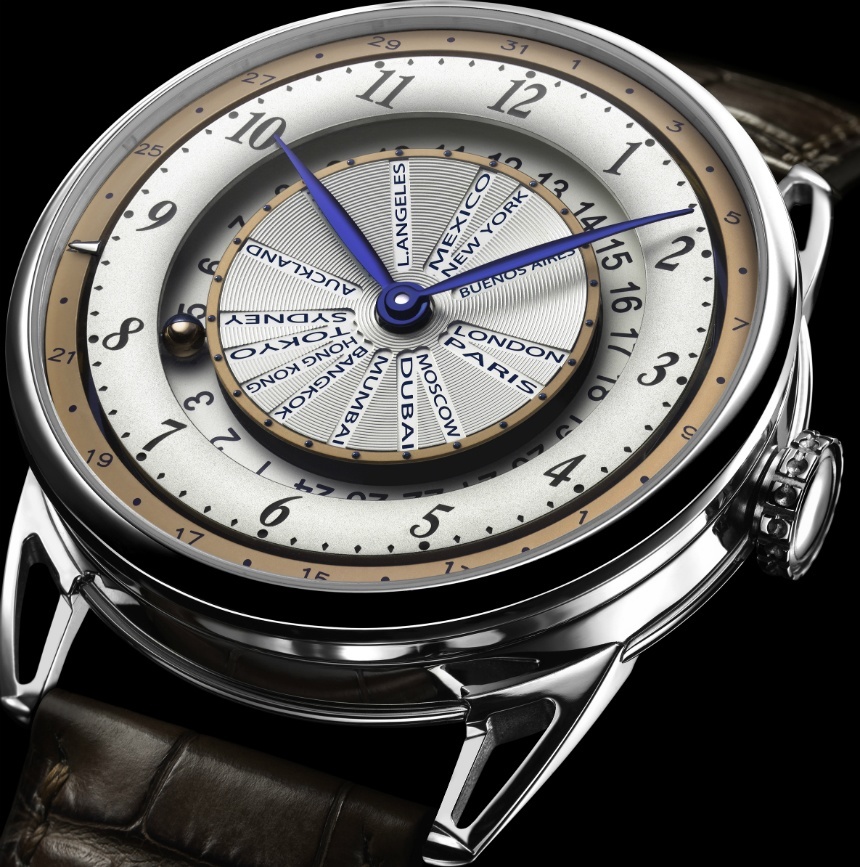 Perhaps the most interesting new movement feature is the all-blued titanium balance wheel bridge and shock-absorption system. Not only is the polished and blue titanium bridge neat-looking, but there is a unique system which allows for a degree of “play” if the timepiece is exposed to shock. You also have a new style of blued titanium balance wheel with 18k white gold weights. According to De Bethune, their in-house balance wheel system has been redesigned for better aerodynamics and performance overall. Of course, silicon is still a major element in keeping the movement performance high, as it is used for the escapement. No one uses silicon and titanium in watches quite like De Bethune, and I thoroughly appreciate how well they continue to improve upon traditional horological principles and techniques using contemporary technology as well as design aesthetics.

The new movement in the De Bethune DB25 World Traveller is known as the De Bethune caliber DB2547. Given its features, it is notably “over-engineered” being made up of 430 parts. Typically, only complex calendar or minute repeater watches have this many parts. For collectors, this is probably a good thing, even though traditional wisdom for all machines is: “the fewer parts the better.” I am simply going to compare De Bethune movements to some German cars that enjoy relishing in enormous amounts of what some people might consider “over-design.” Operating at a modern 4Hz (28,800bph), the DB2547 movement has a long power reserve of 5 days. Unfortunately, there isn’t a power reserve indicator, which is a feature I really think is important on manually wound movements. The power reserve is spread between two mainspring barrels which have a “self-adjusting” system which, as I understands it, ensures that the flow of power from the barrels to the movement remains relatively consistent as the springs wind down.

In terms of functionality, the DB2547 movement is all about indicating two time zones and having a discreet peripheral date indicator (no seconds indicator, though!). There is the main time on the main dial, as well as a 24-hour (GMT) world-time indicator. Here is where De Bethune gets their brand DNA involved. Rather than a traditional hand to indicate the GMT time, there is a small moving orb. De Bethune, quite humorously, refers to this small ball as a “microsphere.” If you find that odd, then welcome to the Swiss watch industry where slightly vague poetic descriptions always keep us on our toes when trying to determine what the hell people are talking about. The ball is blued on one side and 18k pink gold on the other. It turns at 6am or 6pm to change from indicating AM to PM times – a clever use of the sphere concept so that you know if it is day or night where the local time is. At first, I thought the “microsphere” (it makes me laugh a bit each time I say that) was free-floating and connected via magnetism like the Christophe Claret X-Treme 1. Rather, it is traditionally mounted via some type of arm hidden by the channel it is in. The ball moves along a 24-hour track which is how you indicate the time in the second zone. Next to it is the world-time disc which shows reference times. De Bethune made an interesting design choice here because they spread the zones out asymmetrically. It actually helps the viewer understand the relative differences between the times in the cities, and not all of them are even standard time zones, such as Mumbai which is GMT + 5.5. While I am a fan of symmetry, I also appreciate the utility offered in this unique and clever GMT-plus-world-time indication system.

De Bethune also seems to suggest that, unlike most world-time watches, you can independently set the local and reference time zones. This is either a plus or minus depending on how you use a world-traveler watch, but given our day and age when you don’t need to worry about messing up the time thanks to electronic time keeping everywhere, it is probably more convenient for today’s mechanical watch wearers to set the local and reference time independently. On the wrist, the De Bethune DB25 World Traveller watch is 45mm wide and 13.7mm thick in 18k white gold. The dial is a mixture of lovely textures and both silver and champagne tones. The discreet peripheral date indicator scale and small hand are wonderfully elegant and designed to not require an obtrusive date indicator hand that cuts through the entire dial. Roger Smith has a very similar system on his upcoming Series 4 watch (hands-on here).