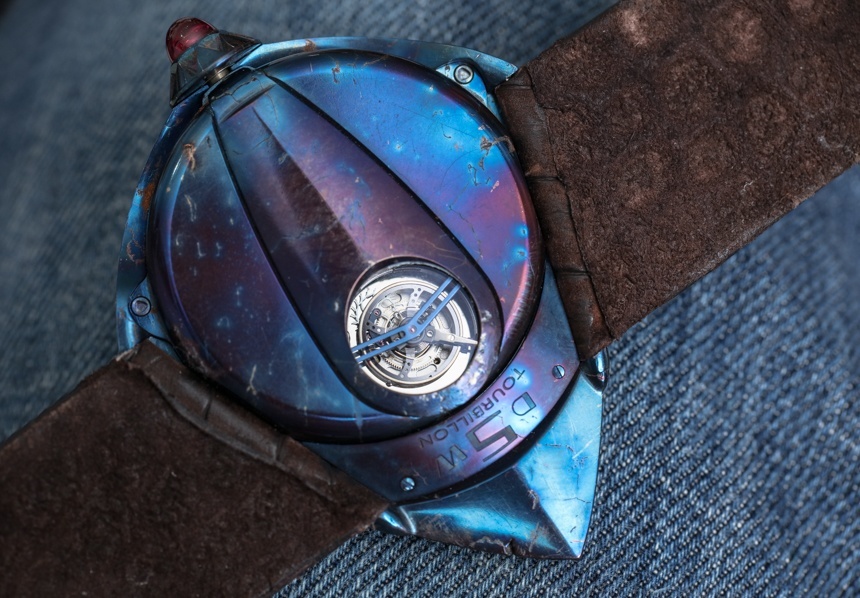 It was almost three years ago that I first put on this piece unique version of the De Bethune Dream Watch 5 (DW5) with an all-meteorite case. De Bethune’s David Zanetta said he “made the watch for fun,” which pretty much sums up the reason he creates most of what he does. In 2014, our James Stacey went hands-on with the more “standard” version of the Dream Watch 5 in titanium (here). There, you can read more about the watch’s concept, and very convincing aesthetic connection to the 1984 Disney movie Flight of the Navigator. As a space-themed timepiece, or at least a fantasy spaceship-themed timepiece, the De Bethune Dream Watch 5 design might be unique but its concept is hardly unusual for the Swiss brand that merges traditional horology with modern materials and creative designs. It is one thing to have a titanium spaceship on the wrist, and it is another thing to have a rather wild-looking cut meteorite spaceship on the wrist. Moreover, unlike the standard DW5 watch, the De Bethune Dream Watch 5 Meteorite adds a tourbillon complication and may actually be just this one-off model. To be honest, I don’t know why De Bethune wanted to wait so long to allow anyone to write about the De Bethune Dream Watch 5 Meteorite. The difficulty in producing the case and the awfully limited market for such a watch might be part of the reason. With that said, the smooth, science-fiction styling of this “real-life concept watch” in the beautiful case material makes it difficult for me to resist its rare appeal. It feels like something from a different world with an indescribable emotional allure to it. Actually, it basically is something from another world with a difficult-to-describe emotional horological appeal to it. The De Bethune Dream Watch 5 isn’t actually all that big, being 49mm wide and 39mm tall. It isn’t very thick, either, and wears surprisingly well on the wrist despite its highly unorthodox proportions. The stone material of the meteorite is specially blued, which results in a series of blues and purples that would go excellently next to any piece of pretty blued-titanium that the brand is famous for. The ruby-capped crown actually has a diamond inside of it and looks like the “engine” (or eye) of the structure. Time is indicated on two discs with one for the hours and another for the minutes. For the De Bethune Dream Watch 5 Meteorite the discs are in a silver tone and adjacent to a blued-titanium segment that includes space for the brand’s signature style “orb” moon phase indicator that slowly makes a complete revolution about once each 29.5 days to show the changing phases of the moon. The movement is manually wound, and the case back is a bit thicker and given a slightly different design than the original titanium version of the De Bethune Dream Watch 5. I don’t have too much more information about the movement, but it has an exposed tourbillon through a small window on the back-side of the case. Here, you can see the spinning tourbillon-style De Bethune escapement system complete with silicon balance wheel (with 18k white gold exterior) and silicon escapement. Power reserve should be at least 4-6 days. There is a lot I don’t know about this mysterious watch such as how the case was produced or if De Bethune will produce any more. I believe they have the skill and some materials to produce a few more of the De Bethune Dream Watch 5 Meteorite, but we will see how this very interesting, and very original watch does before looking to the future. Personally, I am very happy to be shown this extremely interesting and rare style of high-luxury watch that feels like found treasure (from outer space). Price for the De Bethune Dream Watch 5 Meteorite is 450,000 Swiss francs. debethune.ch