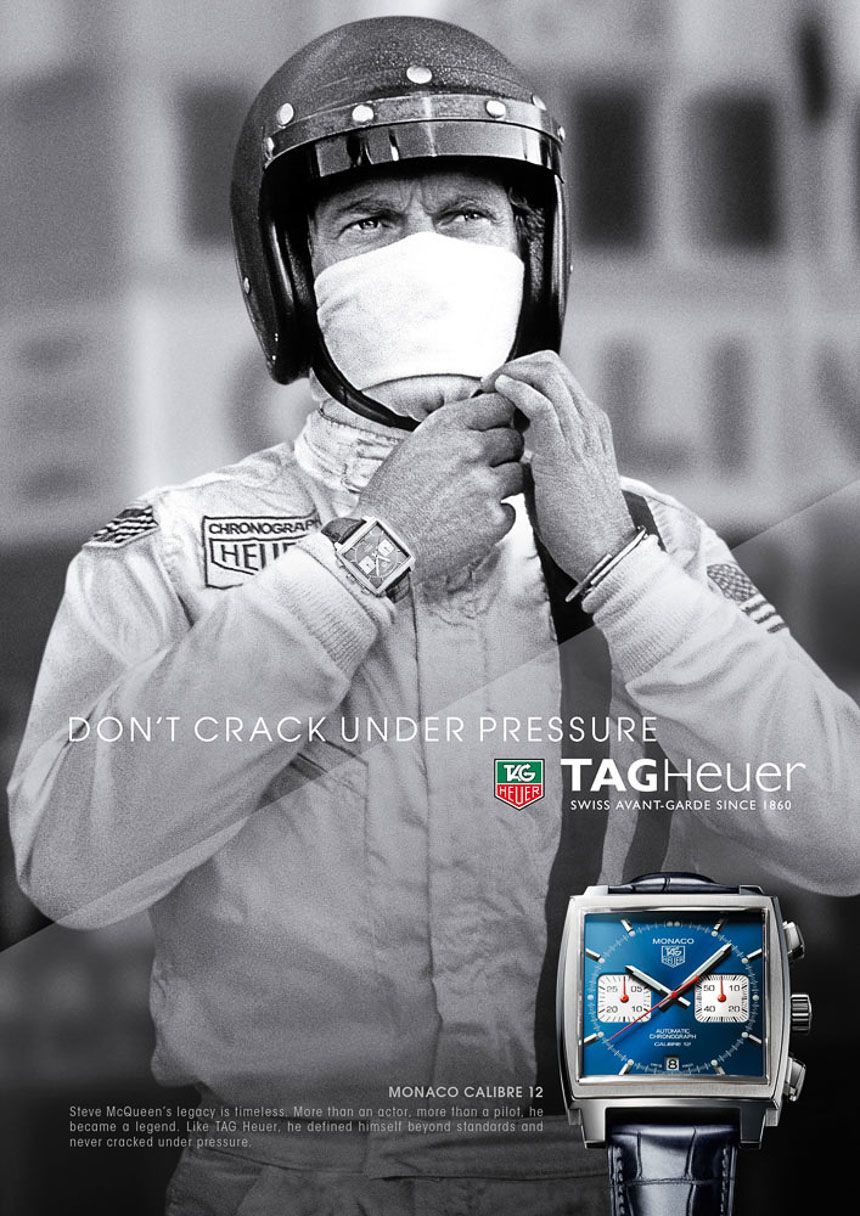 TAG Heuer has evolved and developed a lot over the last few years, but for 2014 their new “Don’t Crack Under Pressure” slogan is more than a new marketing message, but an indicator of a new direction for the Swiss watch maker overall. TAG Heuer, like many other watch brands, has experienced a lot of change over the last decade not only because of shifting economies, but also because of how the major players in the watch industry receive and/or produce mechanical watch movements.

“Don’t Crack Under Pressure” is intended to focus on a more youthful demographic, and sources indicate that TAG Heuer will return a bit more to “affordable” watches in some of the price ranges it was more known for in the 1990s. Over the last several years, TAG Heuer has attempted to climb not only into the $3,000 – $5,000 price segment, but also the $5,000 – $8,000 price segment. TAG Heuer brand fans of course also know about TAG Heuer’s very high-end watches in the $50,000 and $100,000 plus segments. With their new direction, we believe that TAG Heuer will focus a lot more on the $1,000 – $3,000 watch price segment moving forward. As part of the LVMH group, another good reason for TAG Heuer to return to a more accessible price point is simply a matter of filling holes in the industry. LVMH brands include TAG Heuer, Bulgari, Zenith, and Hublot, and they are all at high-end price points, with little on the entry-level side. Jean-Claude Biver (former CEO of Hublot), who now oversees the watch making division of LVMH, more than likely saw a gap in their line-ups, which did not offer a lot for buyers looking to purchase something very compelling in the $1,000 or so price segment. TAG Heuer focusing more on entry-level luxury price points makes a lot of sense for the group overall in being able to capture a wider spectrum of dollars spent. If our hypothesis is right, the group overall wants to benefit from a wider range of price points in the luxury watch segment, not only by technically having products available, but entire brands that strongly cater to distinct demographics.

TAG Heuer themselves indicate that the new “Don’t Crack Under Pressure” campaign is inspired by the brand’s image and popularity during the 1990s. For them, the core value of the campaign is to communicate on the brand’s “unbreakable determination.” To leverage this concept, TAG Heuer will focus a lot more on its brand ambassadors who highlight these traits in their lifestyles and accomplishments. The new advertisements that will feature the “Don’t Crack Under Pressure” slogan attempt to display this new focus on the personalities behind the brand. The initial TAG Heuer ads for the new campaign will feature people such as Cristiano Ronaldo, Maria Sharapova, Steve McQueen, and Patrick Dempsey. This is a shift from Hollywood-style personalities to athletes  (for the most part) ÷ which we anticipate to be a continuing trend moving forward for the brand. TAG Heuer is well-funded, and it is probably a positive thing that they are part of the LVMH group, as changing focus on products as well as a brand message is tough.

One of the major reasons that TAG Heuer is able to offer lower-priced watches is reportedly greater availability of base movements from third-party suppliers such as ETA and Sellita. For the last several years ETA kept warning brands that they would lose the ability to purchase movements from the Swatch Group owned maker of Swiss movements once relied upon by many watch makers. Thus, TAG Heuer (and many other brands) invested heavily into producing their own movements. TAG Heuer released its in-house made caliber 1887 automatic chronograph a few years ago and more recently announced the in-house made and designed Caliber 1969 (later renamed to the Caliber CH 80). It look less than a year after the debut of the highly anticipated CH 80 movements for TAG Heuer to quietly announce that they would hold off producing them for the foreseeable future. It seems as though it would be a most certain shame for TAG Heuer to abandon the CH 80 movements all together, and we anticipate they they are merely going to be delayed – possibly for a few years. The production costs of making the caliber CH 80 are very high, and if TAG Heuer is able to simply purchase movements from ETA and Sellita, it makes a lot more economic sense for them in the short and middle term to do so, rather than produce movements in-house. Furthermore, the lower production costs allow them to produce lower price-point watches which is a major reason why they are able to shift their product focus as part of the branding shift. The good news is that consumers have been asking for TAG Heuer to once again offer compelling lower-priced watches in addition to their successful higher-end Carrera and Monaco collection timepieces.

It is probably good news that brands are able to source movements from ETA and Sellita with more ease than they originally anticipated a few years ago, but that is probably best saved for another discussion. For now, what you need to know is that in addition to the new “Don’t Crack Under Pressure” messaging campaign, TAG Heuer is likely to put more focus on lower-priced luxury watches which should be good news for many of the brand’s historic fans as well as the market reach of LVMH. I also hope that TAG Heuer watches will not crack under pressure. tagheuer.com