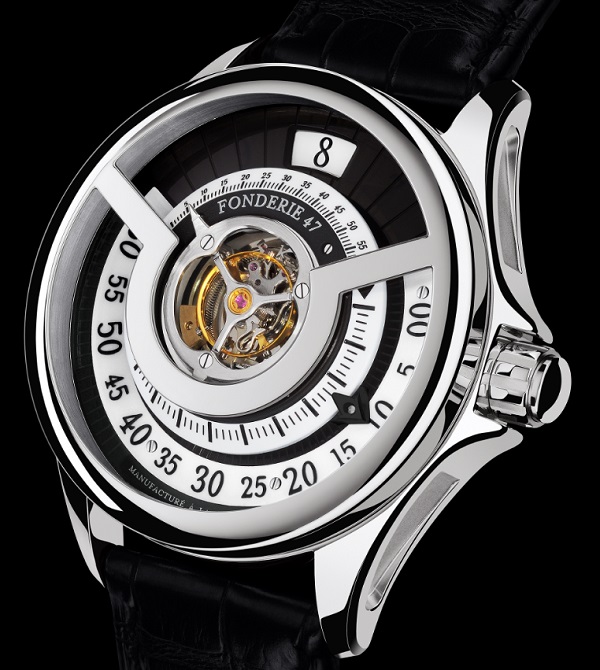 It has been a few years now since I first sat down with co-founder of Fonderie 47 John Zapolski in San Francisco to discuss the interesting new brand concept. Without showing me any products at all, he excited me with a harrowing tale of traveling to Africa, and trying to acquire the first lot of AK-47 machine guns to go back to the United States in order to start production on the brand’s set of “gun-based jewelry and watches.” Of the more memorable parts of the story were how he and business partner Peter Thum needed to find a machinist in the middle of crap country who could cut apart the guns so that they could legally be imported.

Peter and John were gonna throw high-brow charity events and sell the luxury items as feel-good stuff that was partially made from the metal of guns, the purchase of which, were to help fund the removal of guns from war-torn parts of Africa. It was a solid concept if they could get it off the ground. And thankfully moving forward they didn’t need to go to Africa itself. While the watch was years off, the brand was in the planning phase. Their guiding principle was to work with notables from Switzerland who were the best. You may recall the Fonderie 47 transforming cufflinks (covered here), that were designed by Roland Iten. Now two years later the Fonderie 47 super-lux watch is finally here. It was known for a while that it was going to be pretty high-end with a target price of about $300,000 or more. Fonderie 47 didn’t want to market the watch but rather to sell it direct to their niche pool of elite customers. Then Zapolski informed me that he was no longer part of Fonderie 47. The press release for this Inversion Principle watches doesn’t even mention his name. Not really sure about the details, but business is business I guess.

I was pleased and excited to see that the designer of the Inversion Principle watch is someone that aBlogtoWatch has covered before, and also someone I’ve known for years: Adrian Glessing. In the past we referred to him as “Virtual Ideas,” and showed off a couple of his cool concept watches here such as the Big Time, and the Toxic Linear. Now he can add the Inversion Principle to his portfolio, which is quite exciting as it was actually produced. The Inversion Principle will be produced by David Canadaux at Du Val Des Dois in Switzerland. So onto the watch itself. I love how it is both basic and quite complicated at the same time. It features something that is very rare (though not unheard of) being a centrally-mounted tourbillon. The tourbillon is a flying tourbillon and rotates once each three minutes. It has three hands which, one at a time, run across a seconds scale – for that indication. According to Glessing, the dial is thematically supposed to look a bit like the sight of an AK-47 gun.

Above the tourbillon is an instant-jump, jumping hour indicator. Below is a retrograde minute counter. One the side of the case as well as on the movement is a power reserve indicator (I like that there are two for some reason). The manually wound movement has about six days of power reserve and nicely mixes traditional aesthetics with a modern feel. Of course there is some AK in the watch – which is the rear-plate of the movement. Fonderie 47 says that the darker metal piece of the movement uses metal from the destroyed guns. Apparently for each watch they sell they can fund the destruction of 1,000 AK-47 guns. How does that work exactly? The basic idea is that they exchange cash for guns literally buying them from the people of Africa (for your wearing pleasure). It goes without saying that the Fonderie 47 concept, albeit marketing genius, is controversial. While I am not particularly sensitive, I can imagine that some people might be miffed about wearing a watch with metal from a gun that was likely used to kill people by child soldiers. The brand could retort and say that at least the metal is no longer part of a gun used to kill people by child soldiers, but still. Bad juju, is bad juju… The Inversion Principle watch itself is 42mm wide and will be ultra limited to just 20 pieces total. That is 10 pieces in 18k white gold and 10 pieces in 18k red gold.

For what its worth, the concept and message behind the Inversion Principle watch is unique and worth a premium. Fonderie 47 isn’t just a “different” kind of watch or luxury brand, it is a different type of brand altogether. One that can only exist in the ironically consumptive universe that is ultra-high-end luxury. The Inversion Principle by is bang banging its way into reality soon, at the price of $350,000 each. fonderie47.com