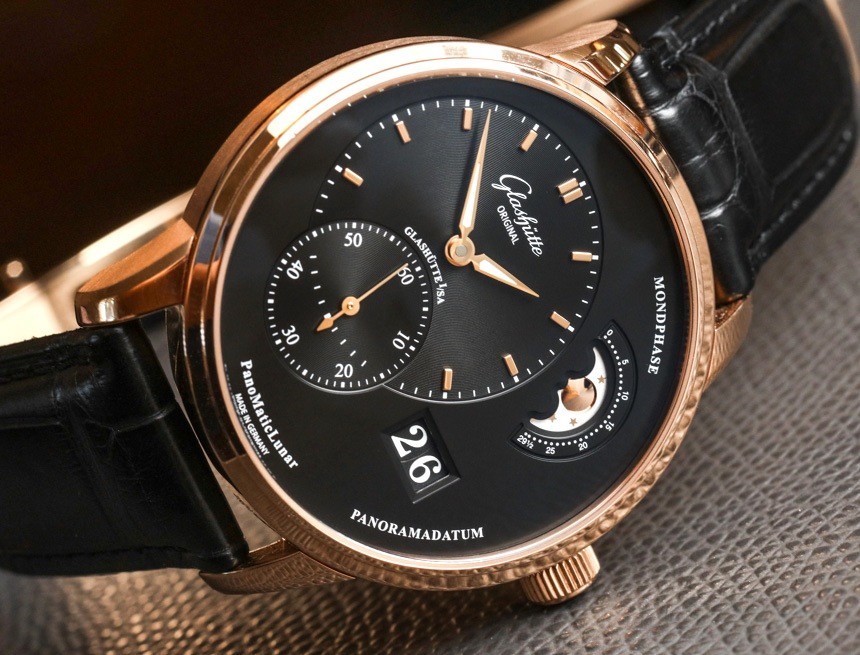 Glashütte Original is one of the more interesting watch brands under the larger Swatch Group umbrella, if for no other reason than that it is German and not Swiss. In a lot of ways, it is a good thing that a company such as Glashütte Original has a larger corporate parent because it has allowed the brand to evolve in a lot of interesting ways, such as being able to purchase its own dial maker. Moreover, the Swiss connection has certainly had its impact on the watch designs which, in my opinion, often do a great job of blending the functional-minded approach of the Germans with the polished attractive design sense of the Swiss. It is for this core reason that I feel a lot of modern-day watch lovers look eagerly to the new releases from this impersonally named brand – that might benefit from having a bit more of a face. Today, let’s review the Glashütte Original PanoMaticLunar… in 18k red gold. Perhaps Glashütte Original watches don’t need a face, as the small Saxon watchmaking town of Glashütte, Germany, might provide more than enough character. While it takes some investment in your education as a watch lover, most people quickly come to associate the fabled village with some of the best watches in the world (and they wouldn’t be wrong). It is impossible to suggest that the Glashütte Original PanoMaticLunar and the larger “Pano” range of watches is not at least thematically related to the neighbor brand A. Lange & Sohne’s Lange 1 collection. Each is about doing classic German watch design asymmetrically. All Pano watches have off-centered dials for the time, along with other complications on the dial such as a big date indicator, and moonphase on the Glashütte Original PanoMaticLunar. Depending on the Pano version, you’ll see everything from power reserve indicators to tourbillons and chronographs (yes, that latter complicated is executed in an interesting way in this the Pano range). Does it matter if the Pano and Lange 1 range compliment or play off one another? Yes and no. The collections are linked by their region of manufacture and designs, but the brands who produce them will be quick to point out how the watches are all very different. This is true especially because Lange 1 timepieces tend to be priced more than the Pano range which is generally a lot more varied and accessible in its price points. If anything, given their quality and design, Glashütte Original watches are a good value, whereas A. Lange & Sohne is positioning itself very much as a top-tier luxury product. In my opinion, the more democratic positioning of Glashütte Original is to its benefit, as there are lots of steel options to compliment gold models. This Glashütte Original PanoMaticLunar, for instance, is available in a few versions including in 18k red gold as seen here, all the way to a steel-cased model on a matching steel bracelet (something you’ll never find at Lange). “PanoMatic” implies in part that this watch contains an automatic movement – which, here, is the in-house-made Glashütte Original calibre 90-02. In the arena of watch movements that mostly look the same, there are some notable visual differences in the 90-02, such as the “3/4 automatic rotor” size and also the particular style of engravings on the balance wheel bridge. It is a sort of local flavor in the Glashütte region (and Saxony in general, that includes watches produced in Dresden) for fine watches to have hand-engraved balance cocks and bridges. It is difficult to see the engraving in detail, but they have a distinct look to them that isn’t super classic, but rather seems to mix a few aesthetic styles. The engraved bridge is covered with another uncommon feature of the this movement which is the double (“duplex”) swan neck fine adjusters. Most movements which have a swan neck fine adjuster have just one, so the inclusion of two should theoretically allow for even finer regulation (for increased accuracy overall), if I understand the concept correctly. The caliber 90-02 operates at 4Hz (28,800bph) with a power reserve of about 42 hours. Overall very nicely decorated, Glashütte Original movements nevertheless have a machined look to them because most of the polishing techniques are done by machine. This is about as good as it gets for machine finishing, though, and at these relatively aggressive prices, I think this is a lot of watch for the money. The movement offers the time with subsidiary seconds dial, a big date (“panorama date,” as the brand likes to call it), and a moon phase indicator. Over on the dial, the features are clearly laid out asymmetrically, but also logically and in a visually balanced manner. The dial is very nicely produced with decent legibility and even luminant on the hour and minute hands. I am not prone to complain about dial text, but given the variety of fonts here and the low utility of some of the text, I feel that “Mondphase” and “Panoramadatum” are just unnecessary. I don’t mind the “PanoMaticLunar” model name or “Made in Germany,” which I feel could have been better placed on the dial. On the wrist, the Glashütte Original PanoMaticLunar is more traditionally-sized at 40mm wide – here, looking slick in 18k red gold. Like I said, the watch is also available in steel. At 12.7mm thick, the Glashütte Original PanoMaticLunar is understandably sized given the movement, but it is on the thicker side of what a dress watch should be. With that said, the almost 13mm thickness does help make the watch feel larger for those who feel that the 40mm-wide size isn’t large enough. I do also appreciate that, while it isn’t a sport watch, the 50m of water resistance is better than the 30m of water resistance you see in a lot of other similar timepieces.