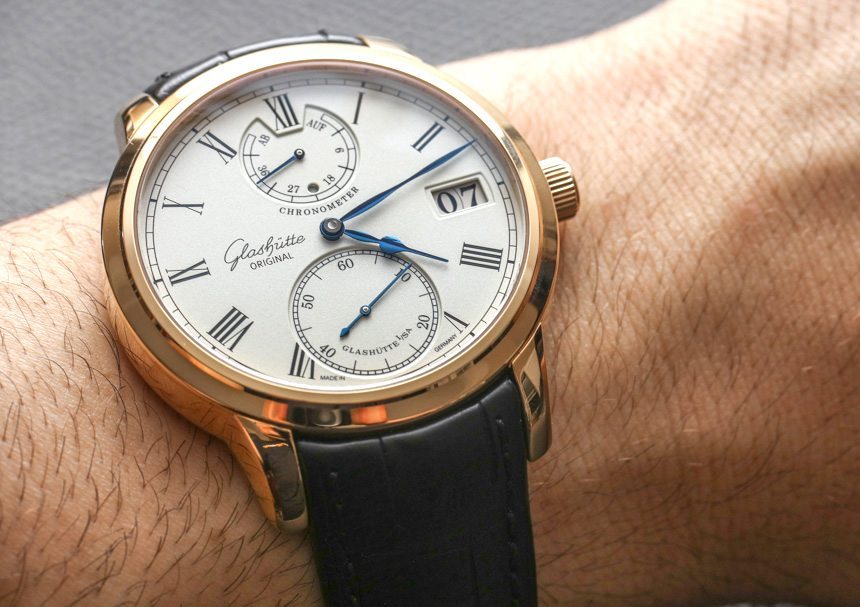 The Senator Chronometer is the Glashütte, Germany-based brand’s first “chronometer” watch. Most people consider “chronometer” watches to be certified by COSC in Switzerland, but that isn’t always the case. There are also German chronometer watches which mirror the COSC standards and are certified by the Glashütte Observatory. The watch retailer Wempe – who also produces watches under their house label – apparently set up a certification department in the Glashütte Observatory in about 2006 designed to test watches that fall within certain performance requirements under DIN 8319 standards. While German and Swiss chronometers both share the daily rate result maximum range of minus four or plus six seconds per day, there is an important difference. Apparently, chronometer watches certified by the Glashütte Observatory are movements which are tested inside of the case. This is unlike COSC chronometers which are movements that are tested outside of the watch case. The difference matters, and a better indication of real-world performance is clearly given when movements are tested after being all cased up. This explanation about German chronometers is important and helps explain the “Chronometer” term which is printed on the dial of this German watch, as opposed to the “Chronometer” label which is printed on the dial of, say, a Swiss Rolex watch. German Chronometer certification isn’t the only thing which marks the in-house-made Glashütte Original caliber 58-01 movement as being special. To date, I don’t believe that any other Glashütte Original movements operate in exactly this way, aside from the caliber 58-04 (an evolution) which exists in the later-released Glashütte Original Senator Chronometer Regulator. So let me explain the various small details which, in my opinion, make this a movement that will probably bring a smile to your face when first operating it.

Let’s first discuss the caliber 58-01’s basic operating specs. The movement has traditional finishing and decor, but operates as a modern movement should. It has 44 hours of power reserve and operates at 4Hz (28,800bph). The movement is 6.5mm thick and quite nice to look at, with its very distinguishable Côtes de Genève-style pattern that is actually a bit different which GO refers to as Côtes de Glashütte finishing, differing with a distinctive German look. The movement also features fine edge beveling, blued steel screws, and gold chatons. In typical Glashütte-region manner, the caliber 58-01 uses a larger “3/4” plate on the rear of the movement which was designed long ago by A. Lange & Söhne to increase the durability of mechanical watch movements. Of course, the recessed regulation assembly benefits from having a hand-engraved balance cock, and you’ll notice a cool set of planetary gears adjacent to the mainspring system. Part of this goes to the power reserve indicator display on the dial. Other features meant to enhance performance are the screw-regulated balance wheel and the swan-neck regulation system.

Functionally, the 58-01 is manually wound and offers the time with subsidiary seconds as well as a power reserve indicator and a big date display at 3 o’clock. Last, there is a small, round window at the bottom of the power reserve indicator dial which is an AM/PM indicator. As a daily wear, the indications on the dial are ideal, and reading everything on the classic-looking face is extremely legible. The first feature that you’ll only understand by operating the movement is the “seconds reset” feature. Many watches have a “hacking seconds hand” which stops moving when you pull the crown out. This is designed to enable the user to set the time more precisely. With the Senator Chronometer, Glashütte Original steps it up a bit with a system that not only stops the seconds hand when the crown is pulled out, but also jumps the seconds hand to “0” – or the 12 o’clock position. The idea, again, is to make setting the precise time more simple. My favorite feature in the movement is a bit different and something I’ve never seen before until I first played with the Glashütte Original Senator Chronometer a few years ago. The same system also exists in the Senator Chronometer Regulator. This system is designed to help make setting the time more precise. Any time you adjust the time on an analog watch, you have freedom to position the minute hand wherever you like on the dial. Of course, what you want to do is position the hand at an exact minute position.

So that is exactly what the Glashütte Original Senator Chronometer allows: the minute hand moves with 60 little clicks, sort of like how a rotating bezel might work. The operation is subtle but highly effective, and the result is the satisfaction in being able to set the precise time, all the time. Nerdy? Absolutely, but this is the type of stuff you should be looking for in high-end watch movements. The best part is that you really feel as though Glashütte Original was trying to produce not just a beautiful machine, but also a precision instrument (the German philosophy to all of their best watchmaking).