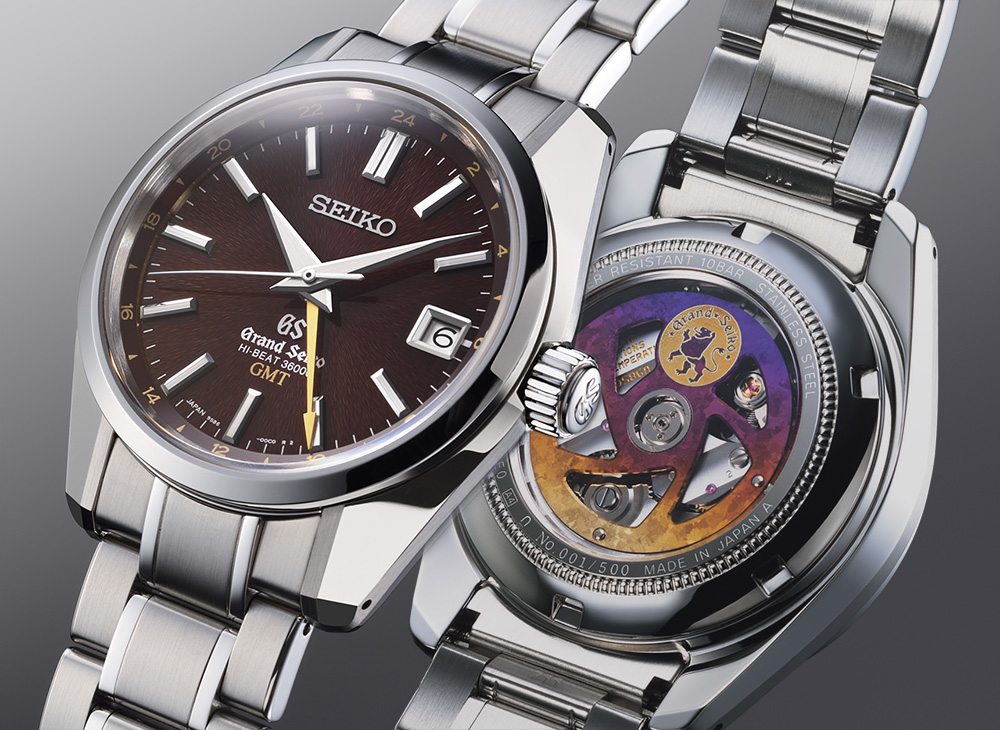 It’s been a couple years since Seiko released its Grand Seiko Hi-Beat 36000 GMT watches that were received enthusiastically. Then, black- and white-dialed models were accompanied by a limited edition with a striking green dial and orange accents. Now, Seiko is similarly releasing updated black and white models alongside a limited edition with a rich, earthy brown dial – and we know that Grand Seiko does dials oh so well. The theme and inspiration for this particular model are again taken from nature, as we have seen in some other Grand Seiko limited editions, and specifically Mt. Iwate, a prominent feature of the region where the watches are produced. A lot of people were excited back in March 2014 by the Grand Seiko Hi-Beat 36000 GMT SBGJ005 with the green dial and orange highlights – I, for one, have kept coming back to it. We went hands-on at that time with the SBGJ005 and the other Grand Seiko Hi-Beat 36000 GMT versions here. Very little is changed in the new models in terms of design and specs. We can expect the same level of detail and focus on practical elements, such as legibility and durability (100m water-resistance) – same 40 mm-wide, 14 mm-thick steel case. Also the same 9S86 movement beats at 5Hz inside, and we don’t need to tell you that Seiko’s “hi-beat” 5Hz (36,000 bph, hence the name) movements are at least interesting, if not a little bit special, even. They are the GMT version of the automatic 9S85 with a claimed accuracy of between -3 to +5 seconds per day (when static) and a power reserve of 55 hours.

Mt. Iwate & the city of Morioka

Grand Seiko’s mechanical 9S watches are assembled, tested, and inspected at the Shizuku-Ishi Watch Studio in the city of Morioka, located in the snowy northeastern prefecture of Iwate. We are told that from the watchmakers’ benches, a view of Mt. Iwate is visible through the studio’s wide windows and that the colors of the dial and the rotor of this limited edition are inspired by the colors of the mountain at sunrise. This becomes a little more poetic when looking at the colors chosen because they are not what you may first expect to be the colors of a vibrant sunrise, but more of a dark crepuscule. The dial itself at first looks like a deep purplish brown but reveals some speckled red or orange on closer inspection. At least, it appears that way to me in the brand’s PR images, though one can expect some variation when seeing the watch in person, from different angles and in different lights. Textures and colors like these, along with the detailing Grand Seiko is known for, promise a dial experience that won’t get old fast. The rear of the Grand Seiko Hi-Beat 36000 GMT Limited Edition SBGJ021 watch shows another interpretation of Mt. Iwate at dawn. For the 2014 limited edition, the titanium rotor had an anodic oxidation treatment to give it something like an aged bronze look. It was a particularly unexpected contrast to the dazzling finishing and polish found on most Grand Seiko movements and cases because the effect was muted and not particularly high-end looking – an attempt to inject some wabi-sabi, perhaps?

Similarly, this year’s Grand Seiko Hi-Beat 36000 GMT Limited Edition SBGJ021 also has a titanium rotor with anodic oxidation treatment, but this time achieving a colorful gradation from orange to purple. Seiko emphasizes that the colors are achieved purely by oxidation and not by any coating or painting. They explain that, through electrolysis, titanium generates an artificial oxide film, the color of which varies and is controlled according to its thickness. Grand Seiko has always been good at adopting European design and executing it with meticulous Japanese refinements. As Grand Seiko has begun to garner serious popularity around the world among enthusiasts, they have perhaps realized that people who want a high-end Japanese watch actually like it if it seems proudly Japanese. And thankfully, they have recently (at least for limited editions) been searching out local, distinctive themes and resisting the temptation to use familiar symbols and clichés of Japan, like woodblock prints or samurai swords. There is so much more that’s interesting and cool about the country than sushi and Mt. Fuji. The recent Grand Seiko Black Ceramic Limited Edition Chronograph SBGC017 (hands-on), for example, featured a pattern of tiny pine trees on its green dial said to be a tribute to the Onbashira festival in Nagano prefecture, near another of Seiko’s high-end watchmaking facilities. I want to see more of this kind of thing, if not genuine originality, across Seiko products. Available worldwide from November 2016, the Grand Seiko Hi-Beat 36000 GMT Limited Edition SBGJ021 watch comes on a bracelet for a price of €7,300 and only 500 will be made. That is only €100 more than the non-limited Grand Seiko Hi-Beat 36000 GMT SBGJ017 (white) and SBGJ019 (black) watches that come on brown and black crocodile straps, respectively. No matter how lovely the pieces are, these are prices that will still force serious fans to think hard. seikowatches.com