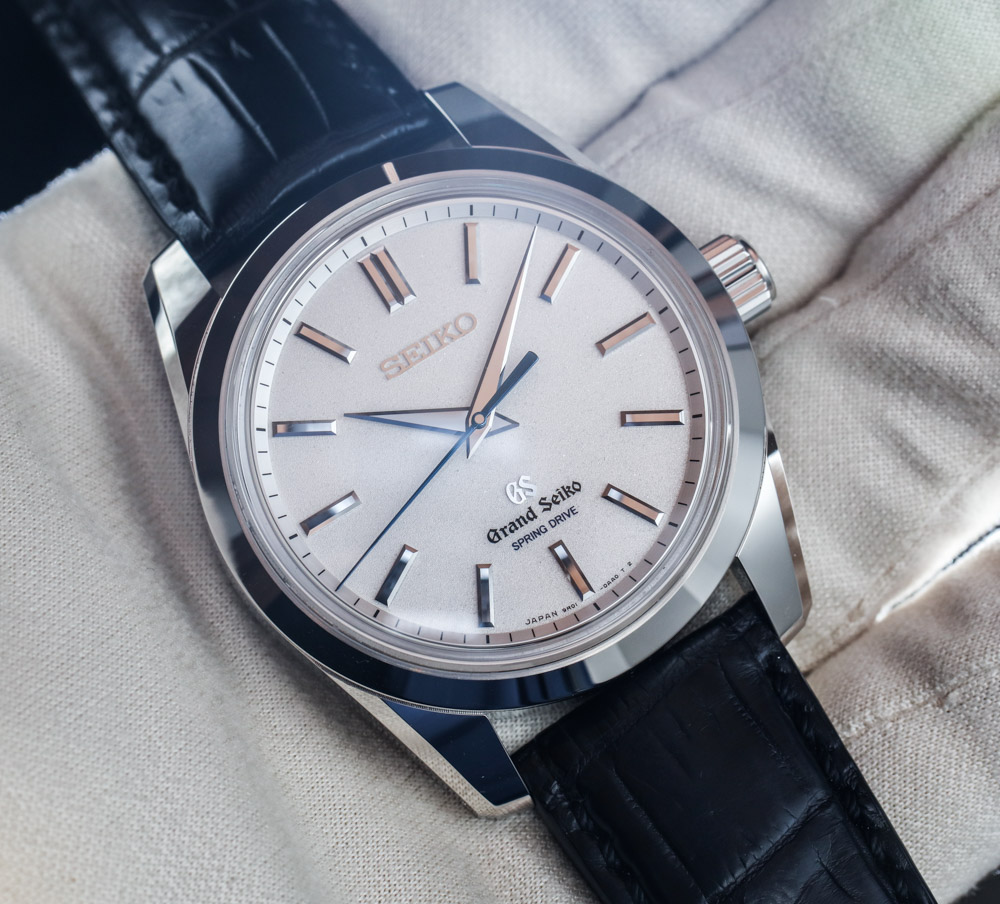 There has never been, in my opinion, a stronger attempt than this platinum-cased Grand Seiko SBGD001 watch, to woo the Europhile horological elite into accepting Japanese watches. I will begin this hands-on look at Seiko’s new-for-2016 wonder-watch by saying that I am perhaps the most outspoken and ardent supporter of Japanese watches I know in the luxury watch media. Many in the watch industry acknowledge the talents of our Asian neighbors, but prejudices still run deep as the quartz crisis was in full destructive mode as recently as the 1980s, an event that almost eradicated the European mechanical watch industry. Moreover, senior executives at many brands recall the fear from that time that they would all be owned by foreign companies and that the essence of “Swiss Made” would be diluted as an inevitable result. For these and other reasons, the Swiss watch industry still mentions the Japanese with a subtle grind in their teeth. At least Japan’s mature watch industry gets a mention. China’s watch industry isn’t even a topic that is openly discussed among “luxury industry” personnel within the Canton of Geneva. Fake watches are still a deeply sore topic even though China’s consumer class is a ripe asset for the industry. The two at least share an opinion that European goods are more desirable than those produced by the PRC. Much has been discussed on Japanese watches from a Western perspective and how the comfortable and practical-minded watch collector is quick to accept – as well as defend – the appeal of many (not all) Japanese watches. Staunch conservatives in our collector community who understandably see “prestige” as a source (though often inflated) of watch value, still find the Japanese sense of product marketing to be highly lacking. In other words, they can’t connect on a personal level with the people who work or worked at Seiko to develop the personal relationship with the brand that resonates with so many people that look for that in a watchmaker. Think of all the efforts the European brands focus on “meet the guy (or girl) who made your watch.” It’s a very effective tactic that Seiko has attempted in a perhaps not “as” effective manner as the slick Swiss. What has been talked about less from our side of the world is how the Japanese view the Swiss watch industry. From a consumer perspective, Japan is a voracious consumer of all manner of luxury goods including high-end watches. Unlike the Chinese, Japan’s consumers have always been happy to purchase domestic as well as foreign-made luxury goods. Moreover, Japan’s culture inherently values “well-made tiny things.” If a luxury watch doesn’t fall into that category then I don’t know what does.

Japan’s long-standing economic recession has still not fatally wounded the country’s watch market. Luxury watches are among the indulgences the people both permit and embrace – and for men and women both. Japan remains one of the strongest markets in the world for luxury watches – and consumer involvement and education is through the roof. This is where people buying a pre-owned watch will inspect it with a magnifying glass at the time of purchase and fear no funny looks from the staff. As I mentioned above, Japan consumes both foreign and domestic watches in high volumes. Swiss watches still go for a lot more money, but don’t forget the big three Japanese watch makers Citizen, Casio, and Seiko all still have thriving businesses in Japan of products that are only sold domestically. Japanese mainstream tastes for watches are perhaps a bit different than people in other parts of the world. At their core, what most Japanese watch consumers want in a product is a watch that performs very well, is extremely low-maintenance, and will look new for a long time. That means features such as glossy scratch-resistant coatings and atomic clock radio-controlled quartz watches resonate so well with consumers. Japan’s high-end watch industry, when it comes to mechanical watches, is purely for the collector, as it is in other parts of the world. An executive in Japan is dually rewarded for getting a quartz movement-based Grand Seiko. It is a top-tier timepiece product with impeccable movement accuracy and performance, and is both a domestic product (shows national pride) but is also not too excessively priced (shows fiscal prudence – a rather valued trait). Those who enter the world of mechanical watches do so out of a deeper appreciation or are those that have the social status to show off a decadent lifestyle.

The watch industry itself in Japan has always looked to Europe with deep respect, but also keen attention. It would be incorrect to say that the Japanese watch industry was not deeply inspired by that of Europe. It is, and especially at the top-end with brands like Grand Seiko. With that said, they emulate European concepts in design and production up until they can evolve and adapt them. The luxury Japanese watch will never be quite like the luxury European watch because the two cultures have slightly differing values. Europeans like the distinct feel of hand craftsmanship, while Japanese tastes reward the craftsman so skilled that his product looks like it is perfect. Prideful of their own work, and justifiably so, the people who make Grand Seiko watches are quietly spiteful of how Europe has treated their watch industry by often not giving it due credit out of bruised egos and because of stereotyped snobbery. Especially at Grand Seiko, the “Meister” watchmakers have long yearned for European acceptance and a welcome to the watchmaking table. Perhaps it is because Japan continues to seek out such acceptance from Europe that they suffer over not getting it. They give too much power to the continent that the country has acknowledged they are arguably too influenced by since the time of Commodore Matthew Perry (who, ironically, was there on behalf of America). Maybe I’m guessing too liberally, but I ask myself often why it seems like despite a huge amount of independent character and talent, Japan’s watch industry still sees total acceptance as being accepted by the Europeans on the same level, on their turf. Which brings me back the current watch (that I just went off topic on for about 1,000 words) which is Seiko’s best attempt ever at making the coolest-looking Japanese-European timepiece.

Watches in platinum in Japan are rare. This watch is 43mm wide and in platinum. Not just any platinum, but a special alloy developed so that it could be finished for a pristine polish using Seiko’s noted “zaratsu technique.” This also leads to handling scratches better which a softer metal like platinum needs. This is enough platinum for almost two of any other size of dressy Grand Seiko watch.