Someone purchases a Greubel Forsey timepiece (on the condition that they can afford it, of course) primarily because of the Swiss brand’s universally acknowledged dedication to finishing and visual detail. I sometimes call this “surfacing,” because the people at Greubel Forsey seem to put in far more time and effort (as compared to many other high-end brands) into making sure that the surfaces of all the materials and parts that go into their watches look as “perfect” as possible. This is something clearly seen in the Greubel Forsey Tourbillon 24 Secondes Vision watch featuring a salmon dial, which we’ll go hands-on with today. Surfacing perfection is one of those areas where high-end Swiss watch brands tend to continue to beat out the rest. Yes, there is an artisan here or a Grand Seiko expert there that is also obsessed with surfacing details in their own particular style, but no one seems to be Greubel Forsey when it comes to not only consistently applying enormous amounts of human time per watch, but in also passing the “loupe test.” What is the “loupe test?” Call it an informal method that enthusiasts use to determine the quality of the visible surfaces on a watch including the case, dial, and of course, movement. “Loupe” is just industry lingo for a small eye-cup style magnifier that has traditionally been used by watchmakers and jewelers who need their hands free while inspecting small areas under magnification. It is also how one can see small finishing errors and other cosmetic aberrations that might be otherwise a lot less noticeable with the naked eye. So the next time someone brings up the question of why Greubel Forsey timepieces average more than $500,000 in retail price each, just tell them it’s the cost of having surfaces in a traditional timepiece look good under magnification. It is a service brands like Greubel Forsey offer in all of their watches, whether it is a million dollar plus master, or a mere, almost $350,000-priced timepiece such as this Greubel Forsey Tourbillon 24 Secondes Vision with a salmon-toned gold dial matched to a platinum-made watch case. I’m not a particular fan of eating the fish, so I tend to not always have a positive association between the hue and the meat – but with that said, this metallic orange-pink dial is very handsome in this color/material configuration, especially because I wouldn’t have guessed that it would work on paper. Platinum case? Blue enamel-painted white gold hour markers? Salmon colored dial and brown alligator strap? That actually sounds like a bit of a color mish-mash until you actually see the watch and realize it was rather well done. aBlogtoWatch first debuted the Greubel Forsey Tourbillon 24 Seconde Vision in 2015 when it was launched here. Given its apparent success in the market, Greubel Forsey actually launched four new models for 2017, each in platinum cases with dial colors including salmon, chocolate, blue, and black anthracite. According to Greubel Forsey, the Tourbillon 24 Seconde Vision collection “in platinum will be released in small editions of a few pieces each year.” So while the collection of models within this product family is growing, Greubel Forsey is still dedicated to preserving the exclusivity its clients rely on. Not all versions of the Tourbillon 24 Secondes Vision have the enamel-painted hour markers but this salmon-dialed version does. This means the applied gold hour markers have their interiors painted with enamel, and then oven-baked. The result isn’t just additional artistic effort and time to each watch, but also a very stable and prominent color that lends itself to dial legibility and overall design. This enamel painting applies to both the hour markers and the matching hands. At 43.5mm wide (and 13.65mm thick), one can’t really call the Tourbillon 24 Seconds Vision a petite watch, but it isn’t massive either. Rather, it feels like a suitable palette for the actual art that Greubel Forsey is selling in the watch. That art is, as I’ve been explaining, in how the surfaces are rendered and decorated. The really detailed work comes in with movement surface treatments, and a “vision” to the movement is offered in the exposed 25 degree-inclined tourbillon as seen through the dial. Greubel Forsey is particularly proud of the curved, yet mirror polished bridge over the tourbillon, that in this form is particularly challenging to polish properly. The movement itself – clearly designed, produced, and decorated in-house by Greubel Forsey – is made from 293 parts, with 86 parts being in the tourbillon assembly alone. This movement is all about aesthetics and artistic technique. Performance-wise it offers the time with a subsidiary seconds dial, a tourbillon-based regulation system, and a power reserve indicator visible on the movement-side of the watch. Operating at 3Hz (21,600bph), the movement has a power reserve of 72 hours. Movement design is lovely, with frosted, polished, and brushed surfaces that all look incredible when examined under magnification. It does take a skilled eye to appreciate all the technique, but once you do, you know this is where most of the zeros in the price of this watch come from. While the Vision watch collection from Greubel Forsey was supposed to lead in a more classic design overall, we still have some Greubel Forsey personality in the “tourbillon bump” on the back of the watch as rendered in the sapphire crystal. A bubble-shape thrusts out of the back giving the tourbillon assembly a bit more room in which to be seen and exist. This might cause a potential wearer to see an ergonomic issue, but in reality the case bubble doesn’t really affect wearing comfort too much. At best, it is a further point of personality distinction in the Tourbillon 24 Secondes Visions timepiece, giving it that much more to focus on when checking out the watch. More so, as the name of the watch implies, the tourbillon revolves around its own axis once every 24 seconds, which is considerably faster than most other tourbillons which spin completely every 60 seconds. I’ve always felt that while Greubel Forsey timepieces are certainly more classic in their design on the scale of “old versus contemporary” there is still a lot of personality that prevents them from being boring. The Tourbillon 24 Seconds Vision is among their most conservative watches yet, but it still manages to be a Greubel Forsey. At the least, the brand holds true to its promise to consumers that its watches be noticeable conversation pieces, and able to help their wearer stick out from a crowd. Otherwise, there really isn’t even a reason to wear such an expensive story on your wrist when people don’t know enough to notice it. Price for the Greubel Forsey Tourbillon 24 Seconds Vision watch is  $345,000 USD. greubelforsey.com 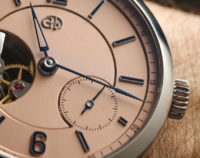 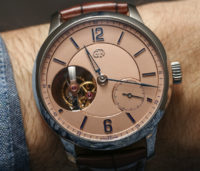 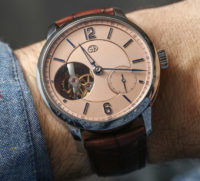 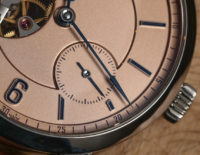 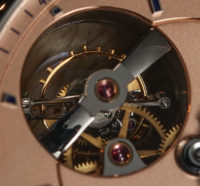 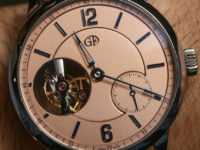 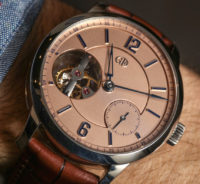 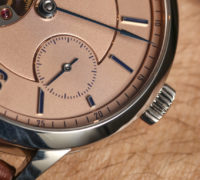