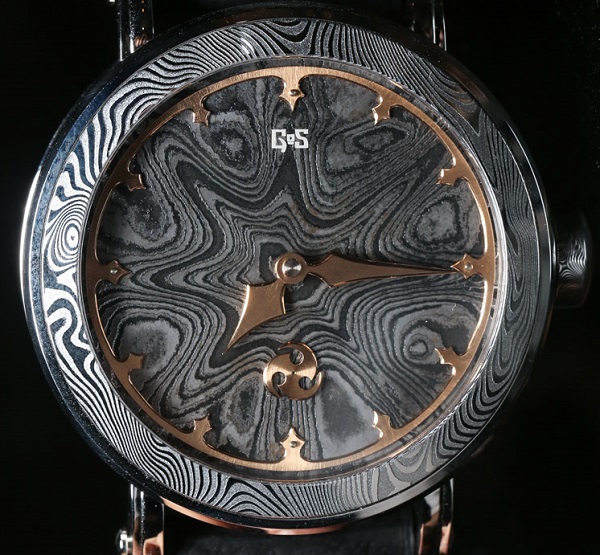 Since their debut some years ago, we have always been fans of the work of Swedish watch company Gustafsson & Sjogren that combines the work of a master knife maker and Damascus steel maker (Gustafsson) and a watchmaker (Sjogren). From the start, the point of the brand was to feature the beautiful look of handmade Damascus steel and distinct Scandinavian aesthetic. No doubt these timepieces are an acquired taste, but as of this year they have reached a pinnacle of their design.

Their first watches incorporated Damascus steel dials and sometimes other elements such as hands or the crown. The next step for Gustafsson & Sjogren (Gos) was to produce an all-Damascus steel case. Eventually however, GoS’s aim was to produce watches with Damascus steel dials, cases, crowns, and even movements. Not only that, but unique in-house made movements that were far and beyond more impressive than the high-grade Swiss ETA Unitas manually wound movement included in their early creations such as the Lapland Sky (aBlogtoWatch review here). What you see here are a few of the most modern Gustafsson & Sjogren watches, and aside from dial differences, represent all that the brand has achieved thus far. The movement is very exciting, but more on that later. The three models here are the GoS Winter Nights, and the Winter and Summer models from the Nordic Seasons collection. Damascus steel is typically referred to as being metal with a wood grain style texture. Though through use of various chemicals, Gustafsson can include a range of beautiful colors as well. In my opinion, Damascus steel goes from good looking to extremely beautiful.

The most complex Damascus steel is of course used for the dial. More simple versions of the folded metal are used for the case and crown. What I found particularly special was that despite what the metal looks like, it is wonderfully smooth to the touch and fantastically polished. GoS produces these cases in 45mm wide sizes and the combination of traditional polishes mixed with Damascus steel is very satisfying. Understand that I am not trying to simply talk up a small brand. I genuinely got excited about these watches after spending some time with them. We first talked about the GoS Winter Nights here, but after a hands-on look I can confirm that we are very impressed.