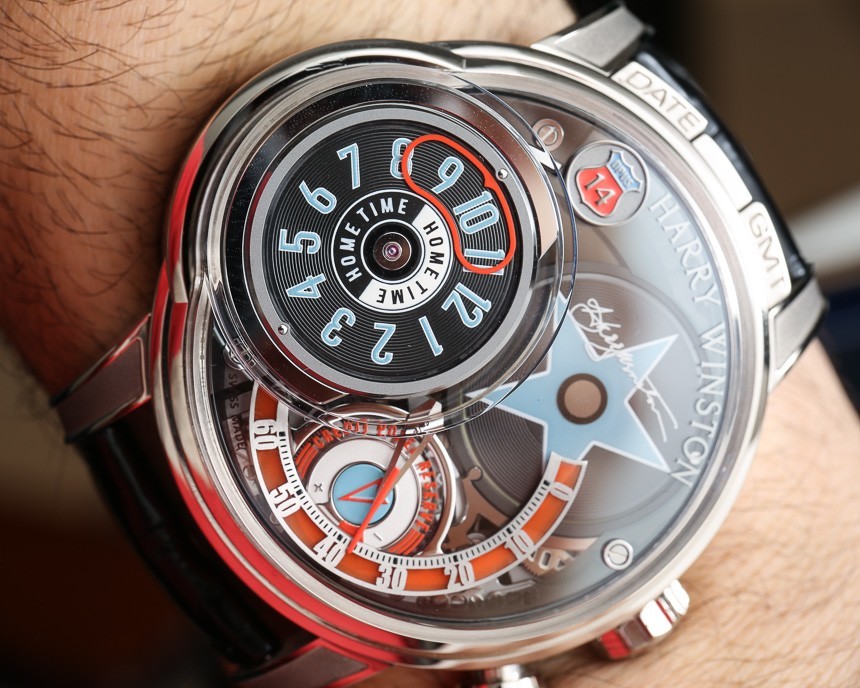 Last night, here in Baden-Baden, Germany, Harry Winston held a rather interesting event to launch the highly anticipated Harry Winston Opus 14 watch (debuted here – where you’ll find most of the technical details). As a follow-up to the aBlogtoWatch debut of the Opus 14, I’d now like to go hands-on with the Harry Winston Opus 14 as well as talk a bit about the launch and what it means for Harry Winston in general. I also recommend listening to Foreigner’s song “Jukebox Hero” while reading this article – which is embedded below. Harry Winston is the Swatch Group’s latest acquisition, and the Hayek family (that runs the group) has been deeply involved in almost every move the brand has made since it became part of the group. Very little was known about what would become of the formerly American company under its new ownership, and many people guessed that the Swatch Group would transform Harry Winston into the high-end women’s jewelry watch maker that it always wanted. Of course, Harry Winston already had a fine stable of diamond-decorated women’s watches, but they also had a number of interesting as well as ultra-exotic men’s watches.

The shining beacon of what is possible in the Harry Winston watch department has always been the Opus collection. Started by Max Busser (later of MB&F) in 2001 when he was running the watch business at Harry Winston, the Opus timepieces were meant to be the ultimate collaboration project between big brand and independent watchmaker. For 13 years, a new Harry Winston Opus watch was debuted on an annual basis. Harry Winston also had a dodgy reputation when it came to actually delivering these masterpieces. A prime example is the Opus 3, done in collaboration with Vianney Halter which was not delivered for about eight years after its launch. Delays when it came to the delivery of new Opus watches almost became a meme in the watch industry. The Opus 13, for example, still has not been delivered because, according to Harry Winston, the ultra-complicated movement is still not ready. The unique movements and exclusivity of the Opus watches pretty much make sure that the design, development, and production of the watch is always a challenge. The presentation box of the Harry Winston Opus 14

All of this pointed to the eventual demise of the Harry Winston Opus project, but of course, reality is much stranger than our imaginations. A few months ago, I was told that Harry Winston would be releasing an Opus 14, and that a big launch would be forthcoming. It goes without saying that everyone was eager to see the first Opus watch from a Swatch Group-owned Harry Winston. I will also take this opportunity to clear up two more things. First, the Harry Winston Opus collection will keep going. Harry Winston has confirmed that at least two more Opus timepieces are currently in development. On top of that, new Harry Winston Opus watches will not be released each year, but rather staggered out a bit. This makes sense, since the effort needed to ensure quality control for each Harry Winston Opus model is intense and the annual production cycle just doesn’t fit with the reality of what is involved. So Opus lives, and it will be part of the future of the Harry Winston brand. The Harry Winston Opus 14 launch event was retro American diner themed. Yes, that is right. Apparently, Harry Winston wanted to actually do the event in the US given the diner and Route 66 theme, but that ended up being too complicated to arrange. Instead, they opted for Baden-Baden, which is a really lovely place, but of course, everyone is a bit confused about why the launch event was here. Nevertheless, Harry Winston was able to hire a bunch of people in the region who owned classic American cars to drive us around – that was certainly fun. So why the Route 66 diner theme? Well, it goes to the jukebox style complication in the Harry Winston Opus 14 watch that uses “record-style” plates which are pulled out from a stack and used to indicate the date, a second time zone, or a record-style disc which has a blue star by default but can be customized for each customer. In fact, Harry Winston is probably hoping that each Opus 14 buyer will take the opportunity to make their Harry Winston Opus 14 personalized. What is interesting is that the jukebox record theme extends to the design of the watch itself, including the “Opus 14 highway sign” styled logo and vinyl record style design motif on the disc surfaces. A good question is who designed the Harry Winston Opus 14, and how did Harry Winston allow them to share in the launch? For many people, this was one of the major questions, because the Harry Winston Opus family has always been about giving independent watchmakers the opportunity to do something really wild. I’ve included a picture in this article of Nayla Hayek and son Marc sitting on one side of a table and the watch movement designers Franck Orny and Johnny Girardin of Telos Watch sitting on the other. This was very interesting because it showed the designers and the Swatch Group on more or less the same level. Franck Orny & Johnny Girardin of Telos Watch to the left and Nayla & Marc Hayek of the Swatch Group to the right.

The communication tactic seemed to be that if a specific person (or people) are going to be promoted in the context of a product launch, then the people who represent the Swatch Group will be there too. Thus, if the gentlemen from Telos Watch are to be mentioned, Nayla (who oversees Harry Winston) and Marc (who oversees the group’s prestige brands such as Breguet, Blacnpain, and Jaquet Droz) will be there as well. The concept actually worked out pretty well, and I think people appreciate the dedication of the Hayeks to this special product launch. Many people don’t know Telos Watch, but Mr. Girardin and Mr. Orny were the people behind the Montblanc Metamorphosis that was originally launched several years ago in 2010. The concept there, as it is with the Harry Winston Opus 14, is to create a dial that transforms into something else. The record changer concept promotes this notion because it allows for a part of the dial to be used to indicate various things – and playing with this complication is really fun. It starts with a slider switch on the left-side of the Harry Winston Opus 14 case that has three positions. This slider combined with a pusher on the right of the case allows for the discs to be changed, and watching this happen is super cool. Overall, the Harry Winston Opus 14 movement offers the time with “digital hours” on a disc, a retrograde minute hand, a power reserve indicator, the date, and a second time zone. In fact, if Harry Winston was to have a “signature complication” based on what you see in so many of their high-end timepieces, it would easily be having two time zones available to the wearer to reference. Harry Winston took the opportunity to announce Robin Thicke (who performed at the event) as a new brand ambassador during the Harry Winston Opus 14 launch.

The Harry Winston Opus 14 is a huge timepiece, and the case design is thematically similar to my favorite Opus of all time which is the Opus 11 (hands-on here). I say this because of how the 18k white gold and sapphire crystal case is designed like a series of stacked cylinders. It is a logical design given the movement and dial layout. While it lacks refined elegance often found in traditional mechanical watches, the Harry Winston Opus 14 isn’t trying to be that. In fact, this ultra-luxury timepiece is a unique glimpse at how Europeans see American culture. The Harry Winston Opus 14 is a manifestation of how many in the luxury watch industry imagine American history and aesthetics. This is Mel’s Diner meets high street shopping, and of course, the result is just as polarizing as you’d expect. Would Harrison Ford have looked cool wearing the Harry Winston Opus 14 in the movie American Graffiti? This is sort of the question Harry Winston is asking with the product, and it has found a lot of love from those who have fond recollections of America during arguably its strongest time in history in the 1950s in a post World War II economy. While so much of the rest of the world was rebuilding (especially much of Europe), America was building and thriving. So while plenty of cheesy things came out of 1950s and 1960s America, the period has had a lasting effect on culture both in and outside of the United States.