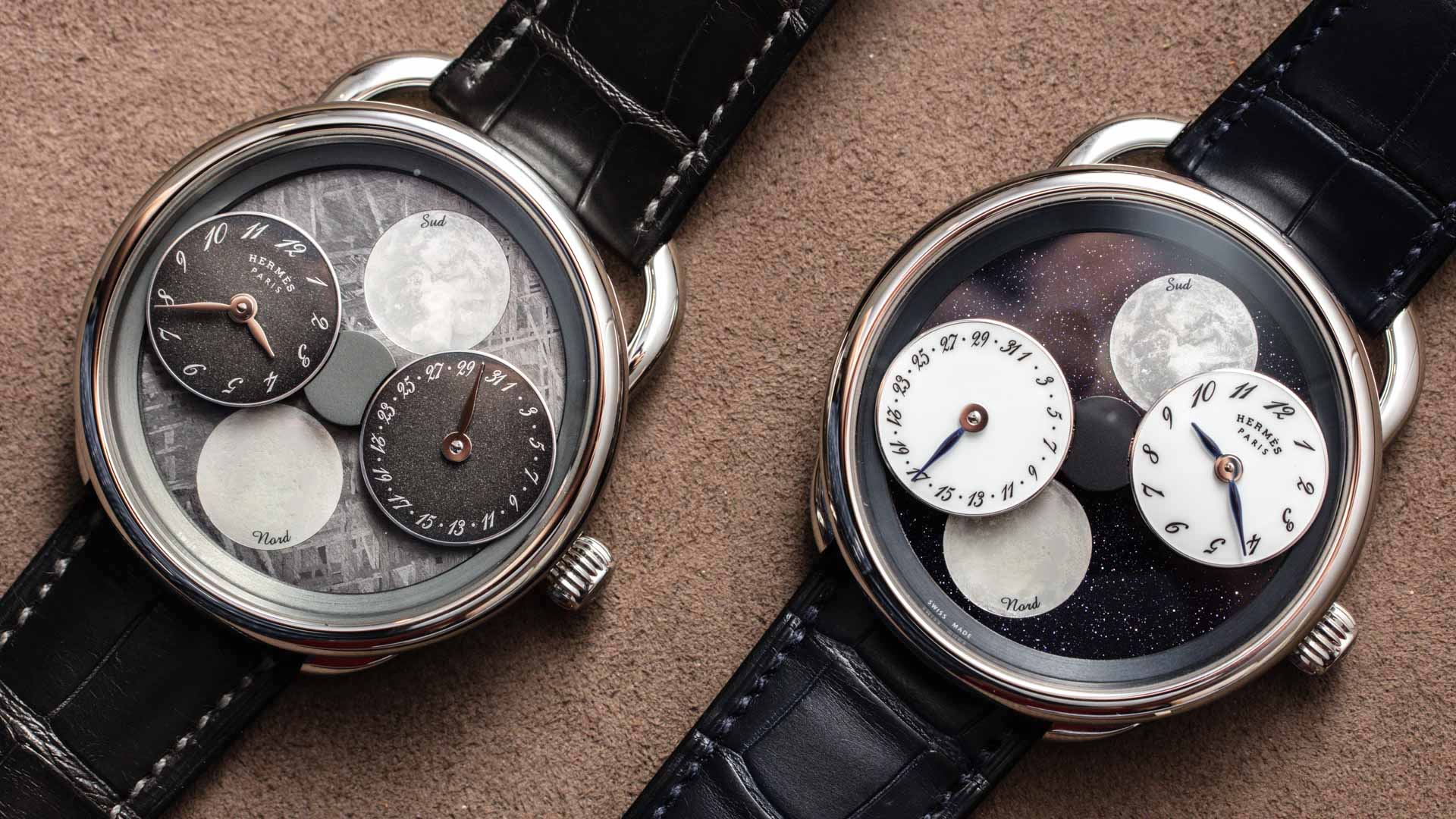 That aventurine. So hot right now. But seriously – if you’re going to make a high-end celestial-themed watch, why wouldn’t you use the most celestial-themed stone in the pantheon of all semi-precious stones? Granted, we saw a lot of aventurine at SIHH this year – subtly executed to perfection here by Montblanc, and a lot less subtly here by Audemars Piguet (though a longtime favorite would have to be Omega’s rare Speedmaster Pro Aventurine from a number of years back). However, none of those have been done quite like the Arceau L’Heure De La Lune from Hermes – a double moonphase complication with a unique time and date display that proves the venerable French maison wants to be seen as a serious watchmaking contender with more than a few tricks up its starry sleeves. Before we get totally lost in the cosmos, it’s worth mentioning that aventurine is a glassy mineral that’s neither terribly precious, nor prohibitively expensive. Geology nerds recognize it as a form of quartz, whose unique blue-green translucency and plated mineral inclusions (a general gemology term for fragments or imperfections within a stone) tend to yield a glimmering effect when cross-sectioned. Varying in color, size, and intensity, those inclusions also happen to look a lot like a starry sky, adding a surprising degree of depth and dimension to what would otherwise amount to a flat surface. And if you’re a watch designer working on a moonphase complication, you’d be crazy not to find a neat way to incorporate it somehow. This is exactly what Hermes designers have done with the L’Heure De La Lune (roughly translated: “the hour of the moon” for you French majors) – using aventurine to lay the foundation for a unique double moonphase watch. The dial has a blueish hue to it, and plenty of the aforementioned depth, with inclusions of varying sizes, lending the appearance of celestial bodies both near and far. The dial is punctuated by two finely detailed transfers of the moon as seen from the Southern Hemisphere at 12:00 and the Northern Hemisphere at 6:00. Oh, and there’s a very subtle but spectacular pegasus motif by artist Dimitri Rybaltchenko hidden in the Northern Hamisphere – spot it yet? Anyway, the general idea is that the mini time and date displays slowly orbit the dial in accordance with the lunar calendar, eventually eclipsing the moon motifs, but not before showing the full cycle as it waxes and wanes depending on from where in the world you’re viewing the night sky. The watch is built around the Hermes caliber H1837, the brand’s in-house (re: Vaucher developed) semi-modular automatic time-and-date movement from 2012, which has been customized with a module to create the unique time display while still ensuring the watch can be fully set via the crown alone. This module alone adds 117 components to the 193-component movement, and enables the time and date displays to complete their circumnavigation of the dial. The overall execution is currently patent-pending, so it’s unlikely this is the last we’ll see of this well-received complication from Hermes. Given the addition of the module, it’s not a particularly thin watch, but these types of art pieces are generally best enjoyed when the artists and designers needn’t conform to the proportions that might be demanded by an everyday wear piece. Furthermore, it would probably be fairly challenging to execute this sort of complication in anything less than 43mm, which is understandable, but it could make wearing the watch a somewhat tall order for smaller wrists. So while it’s not exactly a small watch, Hermes’ signature half-wire lug design that characterizes the Arceau collection watches (they’re easy to spot – they have circular cases fitted with long loop-style lugs at 12:00 and short, integrated horns at 6:00) enable the watch to sit comfortably and close to the wrist with minimal overhang. There’s also a meteorite variant of the Arceau L’Heure De La Lune that’s every bit as gorgeous as meteorite is trendy right now – which is to say, it’s a slam dunk, when its steely fractal textures catch the light just right, as they ever-so-perfectly contrast the milky enamel surface of the time and date discs as they orbit above. As great as the meteorite dial is as perhaps the more visually accurate moonphase choice, as the black enamel mini-dials do a better job of actually contrasting the moons, the aventurine feels like a truly inspired canvas for a watch like this – a proper backdrop for a celestial scene that pulls the viewer in as the time and date displays complete their arc over the dial. Only 100 pieces of each dial variation will be produced, and each carry the same price of $25,000. Head over to Hermes.com to learn more about their watch offerings.