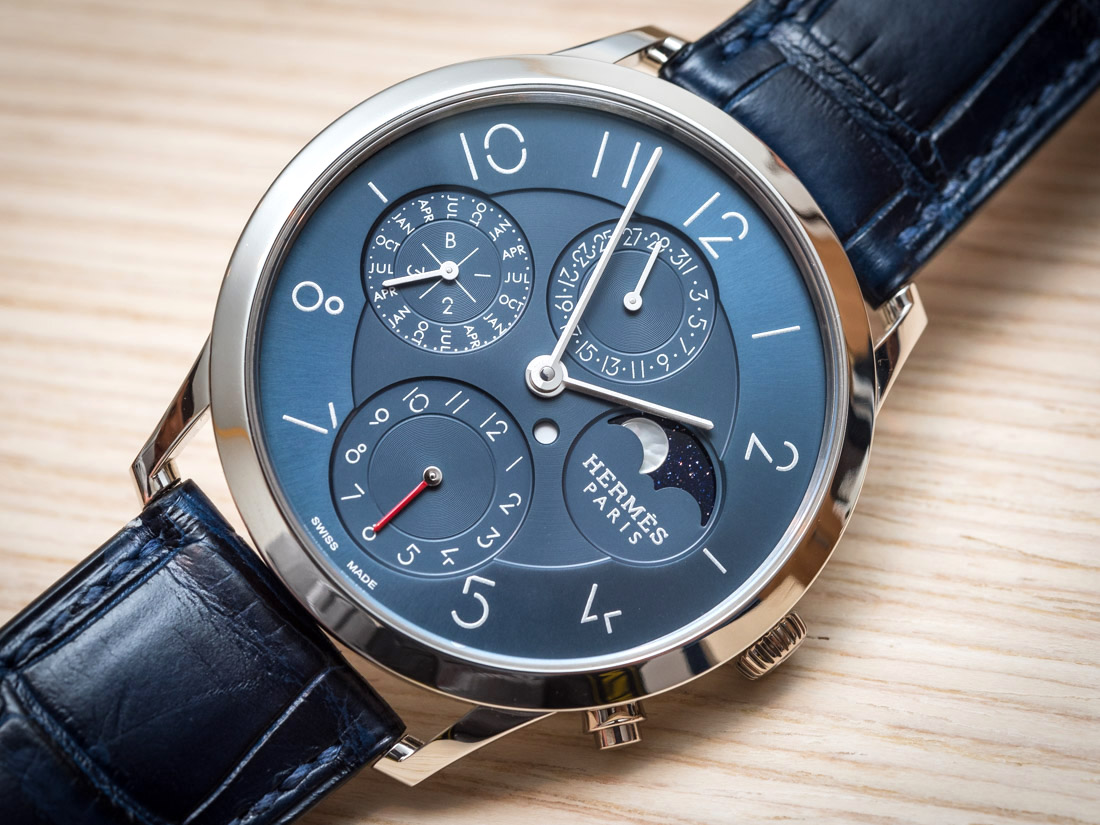 The Hermès Slim d’Hermès line is an impressive effort by the French luxury house in creating a timepiece that succeeds what they would otherwise be able to create were it not for a few advantages. The fact that Hermès has partial ownership of Vaucher for their movements and acquired their own dial and case manufacturing facility allows this Hermès Slim d’Hermès Perpetual Calendar to be an undoubtedly alluring piece that exceeds expectations in some regards. But, it comes with a price tag that is sure to make even the most fawning admirers recoil. A well-known luxury house, Hermès is now aiming to increase its presence in the world of haute horologerie. Despite being a non-traditional watch brand, it is uniquely positioned and equipped for this task. Between acquiring its own case and dial manufactures and having a partial ownership stake in Vaucher, the renowned movement manufacture, Hermès was able to put together a watch with the unusual design elements and features of the Slim d’Hermès Perpetual Calendar. From the super-slim movement with the signature ‘H’ decoration to the sub-dial spacing/tiers and lug shapes, this watch would have been prohibitively expensive, if not impossible, to put together using suppliers and outsourced assembly. For those who may not be familiar with perpetual calendars, it is a complication in which the watch accounts for all the eccentricities of the Gregorian calendar such as leap years and months with differing numbers of days. Theoretically, if you keep the watch wound (and don’t fly across the world), you wouldn’t need to change the date until the year 2100. In addition to time and perpetual calendar functions, the watch also has a moonphase indicator and second time zone with day/night indication. All this is made possible by a module designed Jean-Marc Wiederrecht of Agenhor. It shares the same base movement, the caliber H1950, with signature Hermès ‘H’ finishing as the other models in the line. Wiederrecht is an accomplished movement developer, most recently famous for his Agengraphe chronograph movement and has managed to stay true to the slim philosophy with the Slim d’Hermès QP with the movement+module coming in at just 4mm in thickness. The 39.5mm case and angular lugs help lend this slim watch some visual weight and interest, making it an attractive daily wear dress watch. Visually, I am a fan of the whimsical but elegant design, especially the font and the slim baton-like, rhodium-plated and polished hands, but I find the day/night indication, the small white dot to the bottom right of the cannon pinion, to be a bit of an eyesore on the carefully proportioned and spaced dial. The moonphase, an aventurine sky with mother of pearl inlay for the moon, is another sign of the thought put into this watch and the level of refinement you can expect. When talking about Hermès’ integrated manufacture-like structure, I mentioned costs, and despite the advantages of not having to work with suppliers extensively, this watch is not affordable by any stretch. At a retail price of $39,900, this is in the same ballpark as other precious metal perpetual calendar offerings from more traditional watch manufactures, such as the JLC Master Ultra Thin Perpetual Calendar. That is stiff competition for a fashion brand like Hermès to go up against. Bear in mind also, that for a more meager sum of $8,000 or so, one can have the same design elements in the stainless steel time only Slim d’Hermès offerings. The debate about the legitimacy of fashion brands as watchmakers is not a new one, though it has received more attention recently. While there are plenty of examples where fashion houses get it wrong, it would be improper to disregard a watch like the Hermès Slim d’Hermès QP simply based on any prejudice of this sort. While the watch is no doubt expensive, it is also clear that Hermès has made a serious attempt at haute horologerie here and the watch is capable of standing on its own merits, even against more traditional offerings. Again, for those who are taken by this watch but not by the near-$40k price tag, there is a time only model available for $7,650 that offers much of the charm and elegance for a pared down design and price. The Hermès Slim d’Hermès Quantième Perpetual is a watch for the technical purist looking for a watch with an interesting and unique design. It is available at retailers and online with a blue alligator strap for $39,900. hermes.com