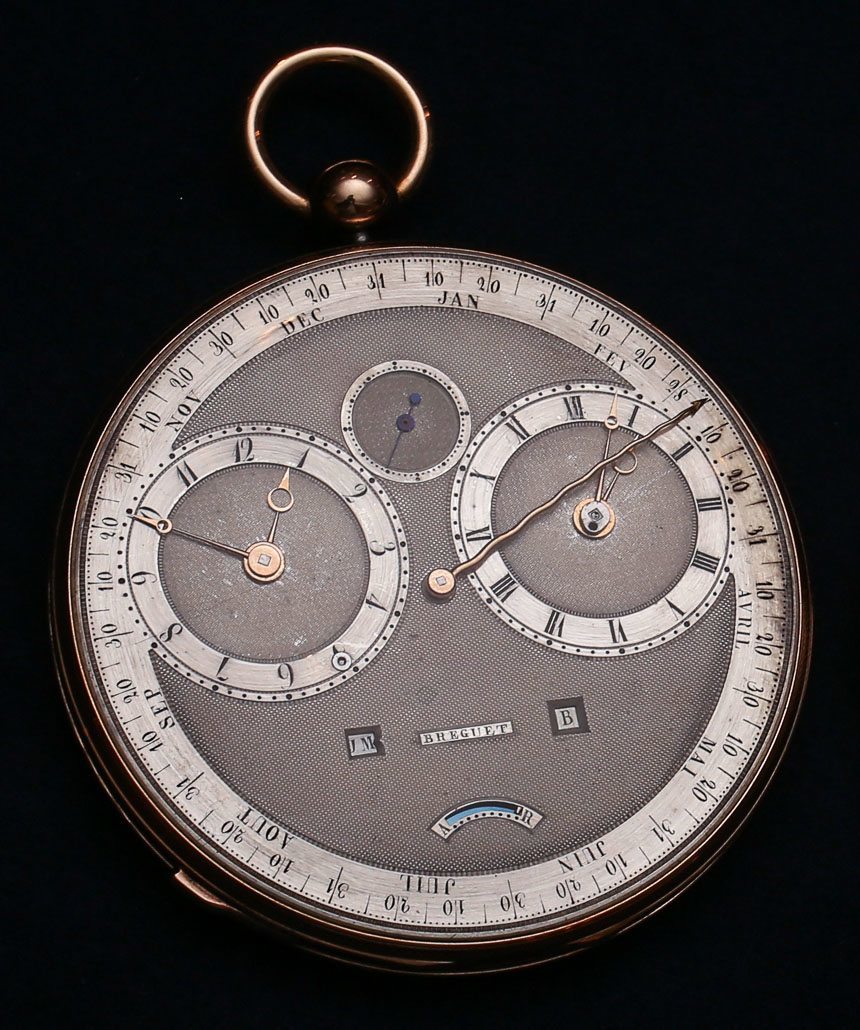 Abraham-Louis Breguet is regarded as one of the greatest watchmakers of all time – and not just when it comes to the opinion of watch enthusiasts, collectors, or journalists, but also in the eyes of some of the most successful watchmakers and designers of today. Breguet’s name has been synonymous with the tourbillon, although his work as a master watchmaker has so much more to offer than just one famed invention. Between September 2015 and January 2016, the Legion of Honor building of the Fine Arts Museum of San Francisco will host the Breguet: Art and Innovation in Watchmaking exhibition, exploring the work and history of Breguet, as well as having the single greatest selection of his work ever displayed in the Americas.

Just about a year before the exhibition, we were invited by Breguet to learn more about the upcoming exhibition and also to go hands-on with some absolutely astonishing pocket watches that A-L. Breguet himself crafted some two centuries ago. We will begin with a unique clock that Breguet built for one his many very special clients: the No. 2655 Carriage Clock – or travel clock – was made for Caroline Bonaparte, Queen of Naples, and sold to her on the 18th of March 1812. Between 1808 and 1814, Caroline Bonaparte was one of Breguet’s most important clients – for obvious reasons – and this had been reflected in the timepieces that she had consigned and received from some of the greatest watchmakers of the era. This particular clock is interesting because it beautifully illustrates the genius of Breguet and just how far ahead he had been of his time. This unassuming looking clock features 8-days of power reserve; half-quarter repeating and alarm functions, which were sounded by three hammers on three rounded rectangular-sectioned steel gongs; age and phases of the moon and… a “digital” perpetual calendar – what a wonderful paradox that is for a clock dating back to the early 1800s.

The clock came with its own travel case and key, and measures 6.3 inches high and 5.1 inches wide, meaning that it really was a compact timepiece designed to accompany the Queen on her travels. Although there were numerous different hand-crafted luxury items in the era – just think of elaborately crafted jewels, clothes, and more traditional works of art – such a complex and yet tiny clock truly meant one of the ultimate luxuries of the time. Moving on to some original Breguet pocket watches, here is one that tells some more about the average Breguet customer: this 45 millimeter wide pocket watch, No. 3519, is in cased in 20k gold and it was sold on March 8, 1822 for 4,500 francs to “Général Davidoff.” His exact name is actually Denis Vasilyevich Davydov, and he was a Russian military man and a poet – who also happened to be a commander of the partisans who defeated Napoleon. One of the more interesting facts that extensive research into Breguet’s work reveals is that the watchmaker not only was an incredibly gifted craftsman, but also an extremely smart businessman, who adeptly maneuvered through massive political storms, always finding the way to sell his ultra-luxurious work – and the story of this pocket watch is yet another tangible proof of that. Inside the gold case is a genuinely beautiful movement that offered half-quarter repeating – meaning that it is somewhere in between a quarter and a minute repeater watch, as it strikes the hours, quarters and half-quarters, allowing the owner to tell the time from the chimes to an accuracy of 7.5 minutes. It is here where we should note that timekeeping accuracy was not the very best at the time, due to the inferior quality of materials that watchmakers could work with, so telling the time with seven and a half minutes of accuracy was more than “good-enough” – and it was likely easier to design and create than a minute repeater. With these timepieces always being made to order, there often is a unique treat to them, something that makes them all the more personal. For the No. 3519 pocket watch, a secret lid had been crafted, hiding an enamel painting on ivory, depicting a lady who had likely been very dear to Davydov. The watch also came with a key and a chain, and received a Breguet certificate – all of which of course were included with the watch when Antiquorum Auctioneers sold it in 2001 for 55,200 Swiss francs – a seemingly fair price for such an incredible piece of history, an item created by one of the very few all-time greats of horology. The second pocket watch clearly is more complicated – and as such, has fetched a whopping 2,547,000 Swiss francs ($2.748 million) in 2012 at a Christie’s auction, about 50 times more than the other piece we just discussed – so let’s discover what makes this watch so interesting. It is the Breguet No. 4111, and it was sold on the 10th of January, 1827 to a certain Mr. Peyronnet for the sum of 7,500 francs – although it was taken back just seven years later and sold to another buyer, a count, for 8,000 francs; that’s some Breguet-business right there for you.

Business aside however, this ingenious timepiece displays mean and true solar time (the latter on the sub-dial at the 9 o’clock position), running seconds on the sub-dial at 12, fast/slow setting aperture at 6 (a rather unique sight!), apertures for the days of the week and leap year indication, and a superb outermost track displaying all 12 months and the dates for the annual calendar. Another interesting feature is the “manual perpetual calendar,” which required the owner to engage a lever protruding through the band once every four years, allowing the perpetual calendar mechanism to adjust for the correct day. The Breguet No. 4111 also offered half-quarter repeating, in case the beautifully engraved, guilloché engine-turned silver dial was not legible in the dark.

Just to see up close the intricate details and the fine mechanisms that Abraham-Louis Breguet had managed to craft as much as two hundred years ago really is an eye-opener on what can be achieved with historical – or rather, ancient – tools. And while the upcoming exhibition in the Legion of Honor building of the Fine Arts Museums of San Francisco is well ahead of us in time – the exact dates are September 19, 2015 to January 10, 2016 – just knowing that it will be the the largest collection of Breguet antique timepieces ever shown in the Americas implies that it will be a must-see for watch enthusiasts and collectors. We picked and discussed three historically important and technically amazing timepieces, and we can only imagine what a more extensive selection of one of the greatest watchmakers will be like to see. Breguet was as much of an innovator, as he was a hugely successful entrepreneur, making him one of the most interesting characters in horology – even some two centuries later. breguet.com