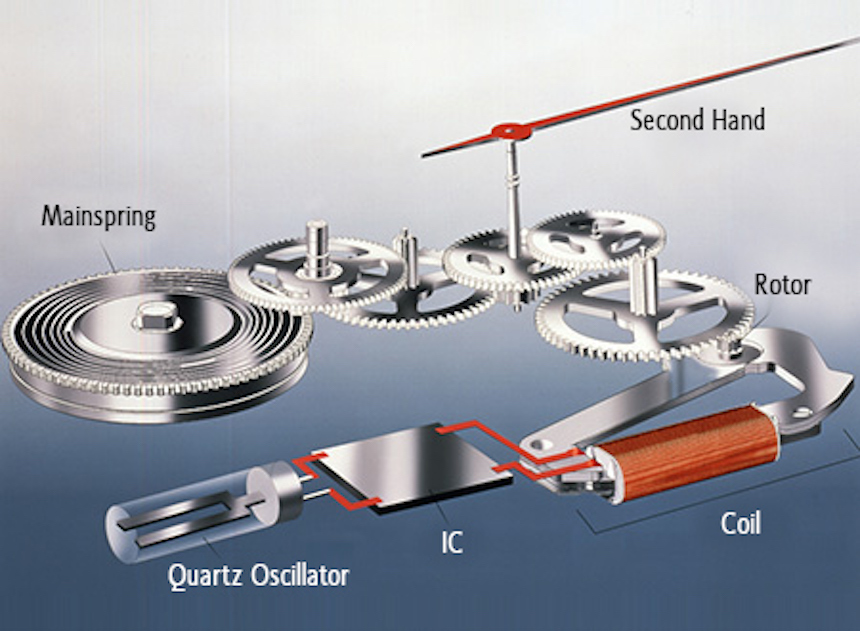 This brief history of the Seiko Spring Drive movement is a segment I originally researched and wrote for my upcoming review of the Grand Seiko Spring Drive Chronograph SBGC001. The review of the watch we will be publishing tomorrow (that is, on Monday, just after midnight, PST), but since this segment turned out to be detailed enough, we figured it would be best to make it into a separate article that was easy for you to find and easy for us to reference later on.

The Seiko Spring Drive watch movement technology is one of the most unique, ingenious, efficient, and accurate calibers ever designed and is in a class of its own among modern mass produced movements. We have covered Spring Drive watches dozens of times here on aBlogtoWatch, so check this link for Spring Drive watch reviews, hands-on articles, and more. Please note that we will begin with looking at how Spring Drive works for the simple reason that we need a good understanding of how the system functions and is constructed before we can talk about the fascinating story behind it all. As such, we are discussing the history of Spring Drive on Page 2, but first, let us dive into the depths of this magnificent movement…

…But before we do that, humor me a short paragraph’s glimpse into the research required for this article (and a heads-up to Seiko corporate): unfortunately, Seiko is notorious among aBlogtoWatch team members for purposely or unintentionally (we don’t know yet) scattering bits and pieces of valuable information on one single topic between as many online sites, outlets, and media formats as humanly possible. From near-impossible-to-find YouTube videos through random Japanese-only micro-sites to never publicly published PDFs, precious little droplets of information and official images on the same Seiko-related topic lay unorganized in the vast fields of the interweb. It took me a few days to put together this segment below so I hope you will appreciate the effort and feel free to chime in in the comments section with relevant data we might have missed. We have talked about how the Seiko Spring Drive works more than a few times here on aBlogtoWatch, but for the aforementioned reasons, we must clarify once again. While a traditional electronic watch is powered by a battery and features a quartz oscillator that controls a step-motor linked to the hands, the Spring Drive movement, as its name implies, receives all the energy it ever needs for functioning from a wound spring. The trick, however, is that at the end of this gear train there is a wheel that is not turning back and forth like a balance wheel does in a traditional mechanical movement but is instead turning continuously in one direction. Bear in mind that Seiko calls this wheel a “rotor” because it rotates in just one direction. We’ll try our best to keep things consistent and easy to understand so that you can easily tell when we are talking about the automatic rotor or the rotor responsible for timekeeping, located at the end of the gear train. Check the image above to see the rotor at the end of the gear train.

The question – and the genius – of the Spring Drive system is how accurate time is being kept. In a mechanical watch, it is the escapement and the balance wheel that are responsible for tick-tocking at a set frequency (usually between 2.5-5 Hertz). In the Spring Drive system, what you have is a so-called Tri-Synchro regulator, named for its ability to control three different types of power: The Tri-Synchro regulator controls and coordinates each of these three power sources, and the way it functions is just inspired.

If there is no battery, how are the quartz oscillator and integrated circuit powered? …you may rightfully want to ask. Well, the rotor, together with its coil blocks acts as a power generator. It works in the same way as a bicycle dynamo that generates electricity from a rotating wheel. The generated electricity activates the Integrated Chip (IC) and the quartz oscillator linked to it, with the latter generating a precise reference signal of 32,786 Hertz. The chip compares this signal to the rotating speed of the rotor, which is eight turns per second. How all this came to be, we’ll look at on Page 2, but for now, we keep on moving. Magnetic power is used for breaking/regulating the speed of the rotor for excellent timekeeping.

Now that we have the necessary electric power and a reference signal to run the watch by, the last task at hand is to ensure that the rotor, the gear train, and hence the watch’s hands rotate at the exact speed we want them to. For this, the Tri-Synchro regulator periodically applies an electromagnetic brake to ensure that the rotor’s rotation is aligned with the reference signal from the quartz oscillator. The IC monitor compares the rotor’s speed with the signal and intermittently applies this magnetic brake to prevent excessively fast rotation…

…And that is how Spring Drive works. Driven by a wound mainspring through a regular gear train and regulated by an integrated circuit and quartz oscillator, it is a most unique blend of traditional mechanical watchmaking and 21st-century technology. Now, at last, let’s imagine all this electro-mechanical, mainspring-driven technology shoehorned into a case small enough to be perfectly wearable on the wrist, have three days of power reserve, be accurate to no more than +/-15 seconds per month, and be reliable in the long run at a much wider spectrum of temperatures than regular mechanical watches. By the way, as for long-term reliability, Seiko says that because the entire gear train rotates constantly without several stops every moment, because there is no traditional escapement with sensitive, lubricated sections, and the rotor wheel of the gear train rotates continuously, Spring Drive movements should last you a very long time. As for the electronic parts, because there are no chemical components (e.g., a battery) to deteriorate and the way the electronics work are comparable to quartz movements (which can last several decades), one should expect long life from a Spring Drive watch.