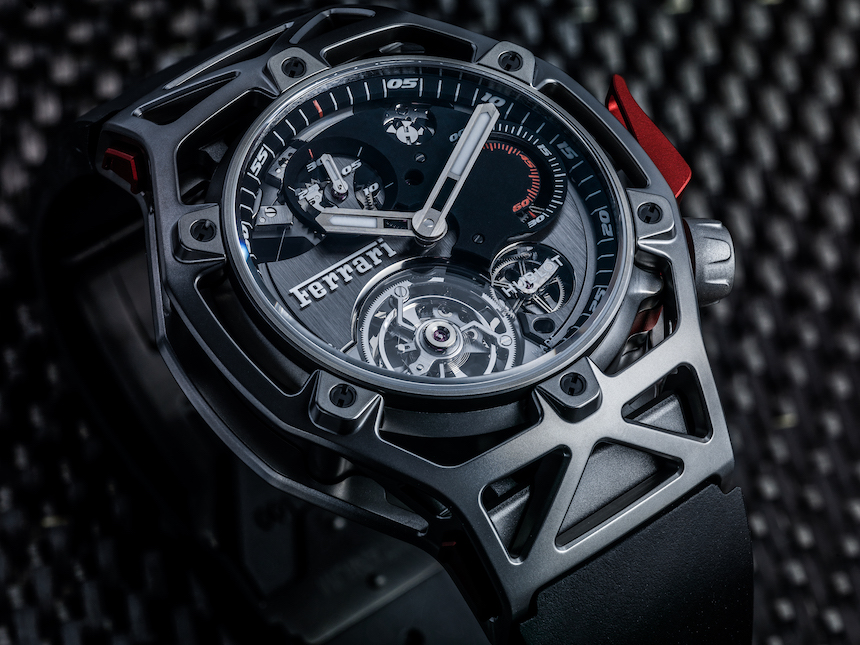 The partnership between Hublot and Ferrari is now about five years old, and the two are celebrating Ferrari’s 70th Anniversary together with a brand new watch designed by the Italian carmaker with a brand new Hublot movement as well. For Baselworld 2017, the Hublot Techframe Ferrari Tourbillon Chronograph watch honoring this 70th anniversary will come in three versions: King Gold, Titanium, and PEEK Carbon, each of which will be a limited edition run of – you guessed it – 70 pieces. Hublot and Ferrari have done way more than most car and watch brand collaborations, so it’s no surprise that rather than slapping some decoration on an existing piece, we see a totally new watch altogether. The highly architectural and bridged design of the watch is far from being over-the-top and overdesigned, which is a relief. It’s aggressive where it needs to be without overcompensating, is lightweight and tough (at least when you consider the Titanium and carbon models), and is also a testament to Hublot’s triumph of being a serious manufacture in both design and movements. The new HUB6311 manual-wind movement inside the Hublot Techframe Ferrari Tourbillon Chronograph is made of 253 components and has a 5-day power reserve. The chronograph is a single pusher function for starting, stopping, and resetting the timer. It’s an old-school object of fascination when it comes to timepieces, but I always love and enjoy the discretion brought by a single pusher. I’m not saying the watch is close to discreet, but the pusher is one of the few splashes of color we see here, aptly done in P485 Ferrari red. The other red pushers you see by the lugs are for an easy strap changing system, which is always a welcome feature. Back to the Hublot HUB6311 movement, it’s done in Ruthenium-coated Anthracite, and Hublot also boasts of an “invisible” crystal above the cage that holds the upper part of the tourbillon using a bridge. I’ll need to wait to see this in action closely, but Hublot says the result is the aesthetics of a flying tourbillon while providing the stability of a tourbillon with two pivot points. The watch is 45mm wide but 14.8mm thick, which is pretty thin, thanks partially to the manual-winding movement. The crown is at 4 o’clock with the chronograph pusher above it which Hublot claims is an ergonomic decision – though I can imagine an errant digit or thumb hitting the pusher accidentally when adjusting the crown. That would be slightly annoying, even if the motion weren’t enough to start the chronograph. But I am just speculating and nitpicking here. The Hublot Techframe Ferrari Tourbillon Chronograph is a dramatic but not gaudy tribute to Ferrari’s 70th anniversary, and though we don’t have images of the gold model yet, the titanium and PEEK Carbon (that’s carbon made with especially long fibers for durability) look absolutely incredible to me. I’m a pretty big fan of Hublot, but I think even people who say some of their offerings are “too much” will be able to appreciate the design here. Of course, that appreciation will be done similarly to most appreciation of Ferrari’s cars: from a distance. Coming in 70 pieces of each model, the titanium version will be priced at $127,000, the carbon model at $137,000, and the King Gold version will cost $158,000. hublot.com