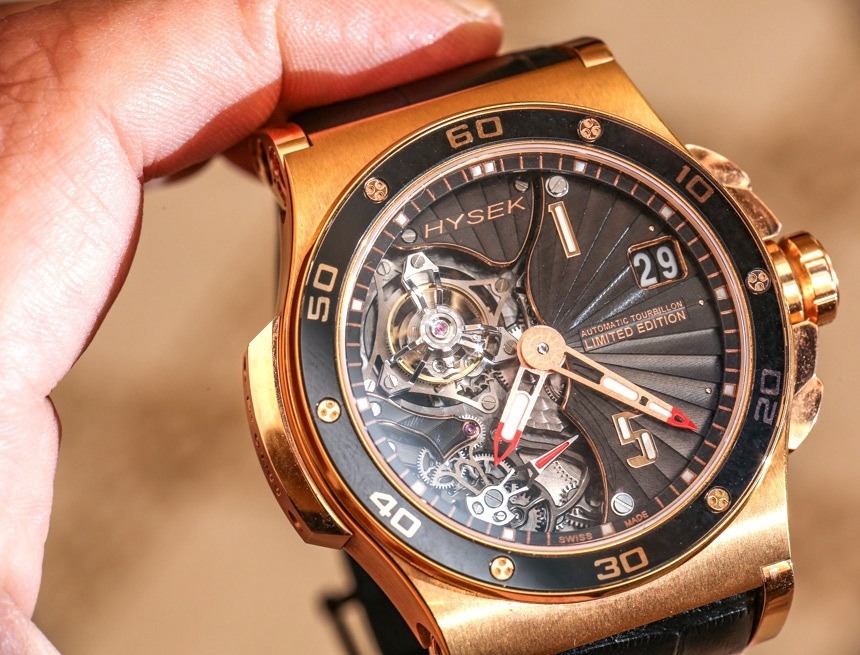 Years ago, watch designer Jorg Hysek began an eponymous brand known as Hysek. Since then, the brand has become independent, but they have maintained many of the core designs that Hysek himself set forth. One of his most popular designs was the Abyss watch collection. From its simple origins comes this Hysek Abyss 44mm Tourbillon which is really a high-luxury extension of the brand’s contemporary dive-style watch collection. So let’s take a hands-on look. As I mentioned, at its core, the Abyss design is diver-style with a modern twist. As an actual diver… well, that is another story. This tourbillon model in 18k gold is only water resistant to 30 meters, which is the same as many Patek Philippe dress watches. My point is that this is a sports-style watch, versus an actual sports watch given its durability. So, for those cowboys wanting to rock a gold tourbillon in the waves, there might be (just a few) other better choices. The Hysek Abyss case is 44mm wide and, again, here in 18k rose gold. The bezel (non rotating, I believe) has a nice sapphire crystal insert, and a nice clean look to it in combination with its diver-style design. One of the better design features of the Abyss case (in addition to the cool proprietary screws) are the articulating lugs with angle up and down for a better fit on the wrist. Hysek likes to calls these lugs “swiveling horns.” The flanks on the sides of the case hearken to Gerald Genta’s classic designs. Things get a lot more interesting when you look at the dial – which is where much of the visual interest comes in to play. It all starts with the in-house-made Hysek Calibre HW03A automatic movement. As a tourbillon, this is one rather decent movement that has about 70 hours of power reserve operating at 4Hz. Features include a big date indicator (with a “semi-instantaneous jumping big date”) the time (with tourbillon acting as a sub seconds indicator), and power reserve indicator. In total, the movement is produced from 412 parts. What is very cool, in my opinion, is just how Hysek decided to display the movement through the partially skeletonized dial. This is a particular design choice that some people love, and some people dislike. I call it the “partially deconstructed look,” because the whole point is to artfully cut away at the dial and movement to reveal the necessary components. The aesthetic almost appears an organic “tearing away” (in an horological style) of the dial to reveal the movement. Thus, about half of the dial is complete and the other half is torn away revealing the movement. Hysek debuted the HW03A movement in about 2010, and it remains a handsome caliber in terms of features and design. While it lacks a sense of traditional elegance, I like the contemporary look of the Hysek Abyss 44mm Tourbillon’s dial as well as its blending of modern and traditional visual elements. One interesting design choice was in how the Hysek Abyss 44mm Tourbillon’s dial is actually skeletonized. You have a look that is meant to mimic the style of how some mechanical movement bridges are designed. Look at the plate and bridges-style cut-away of the dial elements as well as the beveled gold edges. While the concept is strictly “horological,” it reminds me of imagery from Hollywood movies where a robot or machine has some of its “skin” removed so that you can see what people are meant to see as well as the inner workings of the machine. This is a very poetic theme which works very well for modern mechanical watches when a lot of the price is based on the mechanical movement within. If you are going to charge a premium for a watch because of the movement, you might as well feature it prominently. One of the lowest-cost examples of this concept we have reviewed over the years that I can recall is the Orient Racing Automatic (aBlogtoWatch review here). Of course, you have examples of this partially skeletonized watch dial concept in timepieces at reasonable prices and high-luxury models like the Hysek Abyss 44mm Tourbillon. Viewable through the open part of the dial are the tourbillon as well as the power reserve indicator. The fantasy of the design is that these elements are normally “hidden” under the dial but exposed because it would be a shame to hide them. In many ways, the Hysek Abyss 44mm Tourbillon is a sort of high-end fashion watch given that has more artistic focus than it does on being a utilitarian timepiece. But in many ways, that is OK for the demographic interested in them. While you might love or hate the design, I happen to be fond of it as someone who is keen on contemporary watch design. Sure, it has some issues such as the lack of water resistance, locked bezel, and “Limited Edition” text on the dial (which really doesn’t need to be there). Nevertheless, the dial remains legible and the overall look of the case is modern but restrained. In fact, the relative simplicity of the case contrasts artistically with the exposed elements of the dial. A unique and exotic treat, the Hysek Abyss 44mm Tourbillon in 18k rose gold is a good watch for a lot of niche watch collectors – which is probably what Hysek intended, as the model is part of a limited edition of just 88 pieces. Price is up there, at $162,200. hysek.com