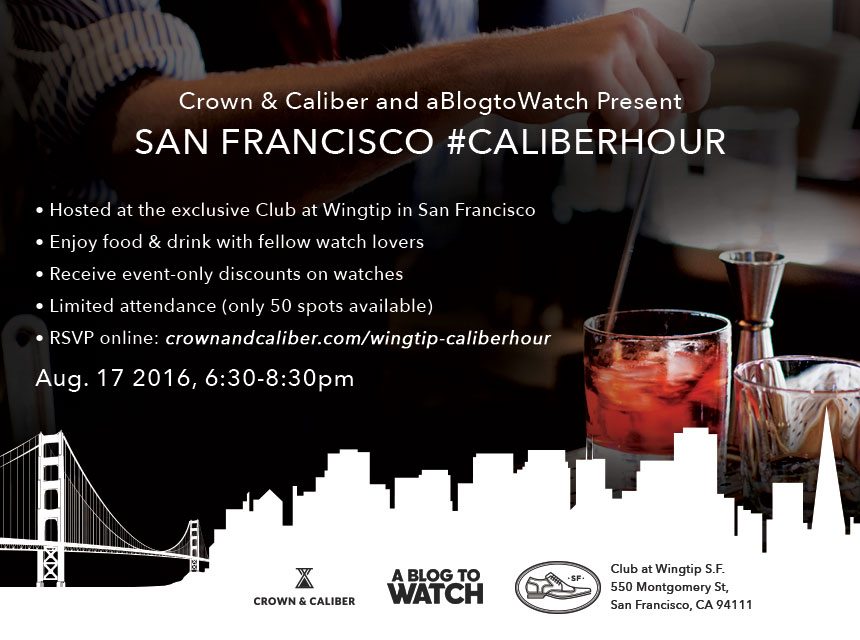 I’m pleased to invite members of the aBlogtoWatch audience living in the San Francisco Bay Area, California, to an event with Crown & Caliber at Wingtip in San Francisco on August 17th, 2016, from 6:30pm until 8:30pm. I, Ariel Adams, will be there as well as other members of the aBlogtoWatch team, in addition to a lot of watches, at one of the coolest clubs in San Francisco. Wingtip is both a retail store as well as an exclusive men’s club concept in the heart of downtown.

Further, we’ve arrange for special event-only discounts on watches as well as other goodies that will make coming an even more enjoyable experience. As is the case with any aBlogtoWatch event, you’ll have your thirst quenched and hunger satiated while spending some quality time with watches and fellow watch lovers.

In order to attend the event, you’ll need to RSVP with Crown & Caliber who is handling event via their RSVP page here. We have 50 spots open, and they will be available on a first come, first RSVP basis. The Wingtip Club S.F. is located at 550 Montgomery St. San Francisco, CA 94111. Once again, the event is on Wednesday, August 17th, 2016, from 6:30 to 8:30pm and I look forward to seeing you there.