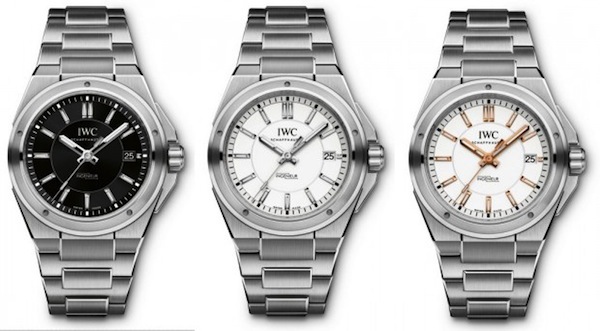 Did you get your fill of pilot’s watches from IWC in 2012? Good, as they have directed their 2013 efforts towards the Ingenieur and have launched a series of new models that commemorate their historic line of anti-magnetic watches that were originally designed for duty on the wrists of French engineers (le science!). The new Ingenieur models include both three-handers and a selection of chronographs. Here we will take a look at the three-handers, in which IWC has announced two very different Ingenieur variations. The first, and possibly most surprising, is the new ref 3239 Ingenieur Automatic which is built around a comparatively tiny 40mm platform. Most modern Ingenieurs are 46mm wide (and fairly tall) but this 40mm version returns to an old-school sweet spot and is a cuff-friendly 10mm thick. The underlying message here is that IWC wants to offer up some competition to the Audemars Piguet Royal Oak and Patek Philippe Nautilus. As I’ve never really taken to the trend of large watches (over 44mm), I think the 3239 is a practical option that will adorn a more conservative wrist with a more subtle sort of luxury. The 3239 still rocks 40,000 amperes/meter magnetic protection, the Genta-designed five bolt bezel and the clear legibility of a watch with tool-ish roots. That said, the Ingenieur Automatic which is powered by the IWC cal 30110, features a very dressy dial design that can be had in black, or silver with hands and markers in either chrome or rose gold. The cal 30110 is an IWC modified ETA 2892 A2 automatic movement which, in its base form, can be found in hundreds of watches and is commonly used as a base for modified movements. The modern Ingenieur range has been comprised of larger watches with more boisterous designs, so it is interesting to see IWC downsize the case and fit a much more elegant and conservative dial design. One has to consider that the 3239 may be the direct result of the continued popularity of the Rolex Milgauss (also 40mm) and possibly a response to demand from customers for an Ingenieur which is closer to its roots. The Ingenieur, ref 666, was originally launched in 1955 featuring both an automatically wound movement and an iron inner case which offered excellent resistance to magnetic interference. Billed as an excellent watch for a variety of real-life situations, the Ingenieur featured a legible display, optional date feature and proudly bore the now-famous Ingenieur lightning bolt logo. The look of the 666 will be familiar to any readers who checked out Paul’s recommendations in the aBlogtoWatch 2012 Holiday Buying Guide as Paul selected the ref 323310 from the Ingenieur Automatic Vintage Collection which pays tribute to the Ingenieur’s roots.

The next big chapter in the Ingenieur legacy came in 1976 when, confronted with the rising popularity of quartz watches, IWC turned to famed watch designer Gerald Genta who had previously changed the face of luxury sport watches with the Audemars Piguet Royal Oak. The third generation Ingenieur was born as the Ingenieur “Jumbo” SL (ref 1832) and the SL is essentially the same platform used to inspire the Ingenieurs of today. Characterized by many Royal Oak-like elements such as an integrated bracelet, fixed bezel with a series of screws or rivet points, and a textured dial with baton hands and markers, the Ingenieur SL could be had as a mechanical automatic or a quartz (ref 3003).

The modern Ingenieur may carry some traits established in the 70’s but that doesn’t mean that IWC is not innovating the line to reflect modern technologies and tastes. The new ref 3225 Ingenieur Automatic AMG Black Ceramic is a 2013 addition that has been created to commemorate the partnership between IWC and AMG, the performance wing of Mercedes Benz. Featuring a 46 x 14.5 mm black ceramic case and either a black or brown dial, the Ingenieur Auto AMG Black Ceramic is a fitting version of the Ingenieur line to match not only the high performance standards of AMG but make a more direct connection with AMG’s Black division. AMG Black is essentially the special ops or “skunkworks” of AMG. They have produced especially bonkers and “track ready” versions of AMG-tuned Mercedes for a number of years, with my favorite still being the 2007-2009 CLK 63 Black which was powered by a 6.2L V8 which produced 507hp. The formula is simple enough, take a Mercedes coupe and crank the power, lightweightedness, and track-day bits to 11 and you will have made a Black. The Ingenieur AMG Black Ceramic takes an already excellent platform and replaces the steel case with one made of ceramic and ensures a fitting in-house movement is taking care of timekeeping. The movement in question is cal 80110 which has been seen in past Ingenieur models (including past AMG versions). The 80110 is a 24 jewel movement which features a power reserve of 44 hours and is fitted with the well regraded Pellaton bi-directional winding system and a proprietary anti-shock system. The 3225 will be limited to 500 pieces and follows a trend of Ingenieur limited editions which pay tribute to the IWC and AMG connection. I don’t think I’m wrong to assume that the new 3239 Ingenieur is going to be a pretty big deal in the coming years. Many have criticized the design for being a bit too boring, a bit too safe, but it’s worth considering that there are plenty of wacky, wild and flashy Ingenieurs from which to choose and that many people buying a watch like the 3239 want something subtle, safe and maybe even a bit boring. If you were going to pick one watch to wear for most days, it would probably be a version of the new 3239 as opposed to the 3225 or some of the more colorful and large models IWC has launched in past years. No word yet on pricing but consider us quite excited to see this nicely sized and suitably thin Ingenieur in person at SIHH later this month.