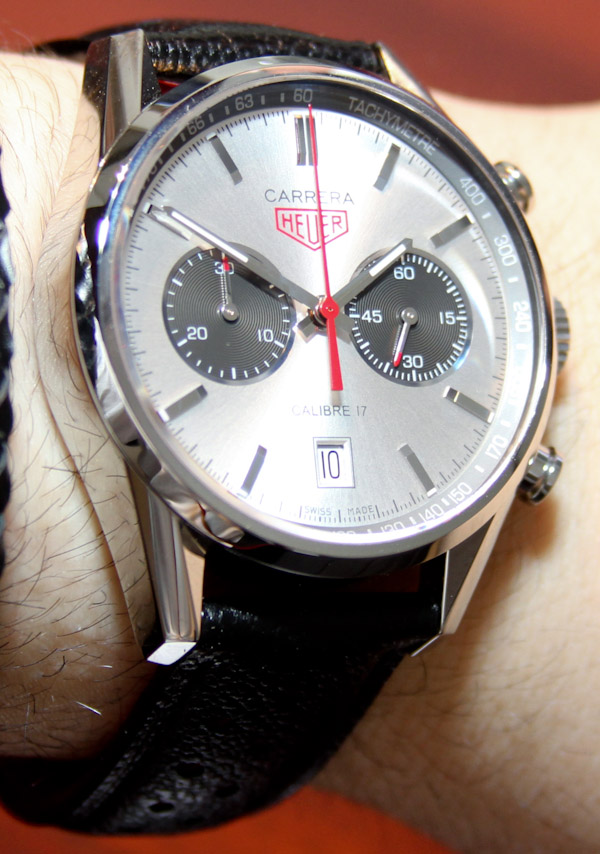 There is something that watch maker Tag Heuer has which trumps most of its competitors. That thing is the person Mr. Jack Heuer. I sat down with Jack Heuer back in March to discuss his legacy and the debut of the Carrera Jack Heuer 80 Limited Edition watch. The timepiece was released in honor of Jack’s 80th birthday as well as his more or less retirement from actively consulting with the brand. Though I have a feeling watch and Tag lovers will spot him around. So what is so special about Jack?

In 1958 Jack Heuer joined the family company Heuer as an engineer. Jack is the great grandson of Edouard Heuer who started the Swiss timepiece maker in 1860. In the 1960s and 1970s “mechanical” was more or less the state-of-the-art in watch making with electronic watches being a mere fringe. It was in a sense, the last golden age of the consumer mechanical watch, before they became luxury items. During this time brands raced to make the best sport watches, which included timepieces for racing, diving, precision timing, and of course space travel. Heuer collectors fully know what role the brand had in advancing the mechanical chronograph wrist watch. It was an important player with a real history of innovation, design, and legitimacy. Jack Heuer was there during this time, eventually running the brand and ushering in new products like the Carrera watch family.

Jack represents a link to this important era. Not just because it was the past, but because it was part of the pre-age of luxury watches. A time when the hard-to-get collectibles of today were available at your local department store. It was when the wrist watch was a necessity, and when precision chronographs had a very real and very valuable purpose. It was an age of nostalgia that many watch brands like to reminisce about today – and for the time being, Jack Heuer is a living and breathing connection to that time, and ambassador to all that is Heuer history.

In the 1980’s, TAG purchased Heuer and eventually created the brand TAG Heuer. In the 1990’s, TAG Heuer was purchased by the larger luxury group of LVMH. So what again does TAG Heuer have that most of its competitors don’t? A real face to the story of their past. A person who can speak on the legacy of innovation and interesting products that they released. A recollection of the good times and bad times. He is the human side of the corporate identity that most large brands lack. That isn’t to say that current TAG Heuer CEO Jean-Christophe Babin is any less human. Quite the contrary, but Babin is not an Heuer and is a relatively recent addition to the Tag Heuer family. The Carrera collection for example, is one of the brand’s best sellers. It is intentionally retro in design because we like to think of it as a connection to the era it represents, and Jack Heuer was there to launch it. For these reasons the Carrera Jack Heuer 80 Edition watch was so heavily anticipated by collectors. I was lucky to check out and photograph the piece personally owned by Jack Heuer himself. The rear of the watch comes complete with his signature in red and his family crest. It is a bi-compax version of the Carrera Chronograph with a Caliber 17 automatic movement. The Caliber 17 is unfortunately not the integrated in-house produced 1887 chronograph movement, but is a good quality base Swiss ETA 2894-2 automatic with a chronograph module. Bi-compax (two register) Carrera watches are rare, and it makes for a good look in the watch. Ironically enough, while the Carrera Jack Heuer 80 Edition is intended to be similar to the original 1963 Carrera, that previous model had a triple register, full 12 hour chronograph.

Aside from that, the original Carrera and this limited edition model are quite similar (though of course the colors are very different). All in all, the Carrera collection as a whole has retained the charming case and dial design of the original. Speaking of the original 1960’s models – I am not a huge vintage watch guy but many of those are really gorgeous. Items from from Heuer, along with Rolex and Omega are among the few vintage pieces I like at all. The brushed metal dial of the Carrera Jack Heuer 80 is matched with deep anthracite toned subdials and tints of red for the hands and logo. This is another retro-inspired modern TAG Heuer watch with only Heuer branding. A nod to vintage lovers of course, you get the traditional Heuer logo on the dial as well as the really neat looking “Heuer” deployant clasp buckle. The perforated black leather strap with the red inner lining is sexy. It almost makes me think of kinky lingerie. But I wasn’t going to share that thought with Jack. It is quite a nice strap which single-handedly upgrades the entire look and feel of the watch. The watch is actually also available on a standard Carrera steel metal bracelet. While I will always recommend a bracelet, in this instance I would suggest to have either both the strap and bracelet option – and change them out as you see fit. That or get just the strap – as it is so cool and unique for a Carrera. It would be a shame to miss out on it. Interestingly enough the watch is priced the same on either the strap or bracelet.

The steel Carrera case is 41mm wide and relatively thick which is common with TAG Heuer Chronographs today. Another interesting point was Jack remarking that the original Carrera was meant to be a relatively thin chronograph for the time. A hallmark of a vintage-themed chronograph is the presence of a tachymeter (tachymetre) scale. Often intrusive if place on the dial, I love the subtle but legible placement of the tachymetre scale on the flange ring against an anthracite gray color.

I would be remiss not to point you over to a more in-depth review of this watch by aBlogtoRead.com friend Calibre11. David breaks down the Carrera Jack Heuer like only a true TAG Heuer fanatic can. Check his piece out here. It made me happy to see Jack wearing and enjoying this watch specially made for him. It did take me a while, but after thinking about it I did realize why Mr. Heuer is such an incredible asset to not only TAG Heuer, but also watch appreciation as a pursuit. He didn’t spend his entire career in the watch industry, and he has a lot of valuable insight and experiences that today’s watch executives should not forget. I was really happy to have met with him. The TAG Heuer Carrera Jack Heuer 80 Edition watch is limited to 3,000 pieces with a retail price of $4,900. Fun trivia: the original 1960s era Heuer Carrera watches all retailed for about $70-$90, with the 18k gold version costing $240. Upgrade price from steel to gold-plated Carrera watch? About $5.